Not-So-Fast Times at Scottrade High: A Review of the High School Reunion Show

They're that band with the beards, right?" asked some dude at the smoking area/bar. He was not alive in 1982, let alone in high school. "Oh, yeah, the furry guitars that spun around."

I've skipped all my high school reunions (Alta High, Class of ´82). Secretly, I hated most of my classmates and they hated me. A wannabe punk living in Sandy, Utah, I especially hated whatever uncoolness I thought ZZ Top embodied. The Stray Cats briefly meant something to me, but I wasn't a rockabilly, and I was too repressed to submit to the Pretenders. The Cars were more my speed, "Candy-O" was my Walkman jam. The Gin Blossoms didn't exist.

What the hell was I doing at the Scottrade Center for the High School Reunion concert? I had sixth-row seats, but none of these bands (with the exception of the Gin Blossoms) have released anything worth the plastic in years. Having run out of whatever fumes they were sucking, the New Cars (a.k.a. the Hybrids) recalled themselves months ago from this tour. I knew it would be the ultimate glory day for beer drinkers and hell raisers, and it was, with the stray Japanese Stray Cat tourist and "Hey Jealousy"-humming soccer mom sneaking down to the front while most of geezerdom (you couldn't really call it a crowd; the arena was half-empty) flipped through their official programs (special to sponsor The Arch 106.5 FM: Plagiarizing from All Music is lame) and all the while fought off nodding-off.

So this is what's become of my demography: Staggering desperate housewives, dudes in golf shirts and khaki shorts convincing themselves that $85 is worth it to see if Billy Gibbons can still breathe without an apparatus, dudes with balding mullets, dudes with KSHE T-shirts wearing their heroes' cheap sunglasses, trophy wives costumed in uncannily realistic yard-long beards, dudes in Hawaiian shirts and mandals and smoking weed they bought from their kids.

I had fun. The Gin Blossoms started at 6 p.m. sharp with "Alison Road," the moms went nuts, and the band sounded like what it’s always been: One of the best power-pop outfits to survive the suicide of their best songwriter. It had half an hour and played the hits. "We've come here to kick ass and chew bubble gum -- and we're all out of bubble gum!" yelped Robin Wilson while making the first of umpteen Satan-rock-signs. Jesse Valenzuela and Scott Johnson's guitars harmonized righteously on "Found Out About You" and toughened up just enough for "Hey Jealousy," which Valenzuela kicked off with a little "Rebel Rebel" lick. "Cheers to the girl dancing in the back," Wilson called out. "Your silhouette is hot. You look like you're on a mud flap." The band deserved an encore for that alone, but no dice, and so Wilson ended with a shout-out to locals One Lone Car and a regretful version of "I'll Follow You Down."

Of all these nostalgia acts, the Stray Cats are the most fused with youth. There's no law that says old men can't sing "Sexy and 17," but still there's that tiny voice inside. Setzer came out in a vintage tux with argyle socks and a bolo tie, and the rhythm section was likewise dressed with distinction. They opened with "Rumble in Brighton" and then into "Runaway Boys," sounding just a little stiff, certainly tight -- this is Brian Setzer's band after all; the guy doesn't fuck around -- but somewhat creaky. They got loose after Setzer called Jim and Lee for a photo op at center stage and a quick pitch-set for "Be Bop a Lula" into "Gene and Eddie." And in case you were wondering: Mr. Setzer can play circles around Mr. Gibbons. So what if was wearing overly cushioned arch-support sneakers? He still made it on top of the kick drum for a solo without incident.

Setzer, whose voice has grown a bit jowly, still caught the fun of "Fishnet Stockings" and "Stray Cat Strut," introduced with a pandering dig at MTV: "This was on MTV, back when they played videos!" Whatever anyone might think or care about the band's rockabilly authenticity, they've always been players, shrewd entertainers, with somewhat overstated punk cred. But, again, so what? They were a blast and still are, especially when winding up with a "Rock This Town" singalong. If any square cats from 1974 were looking for a fight, they were outnumbered by cheering Home Depot dads. 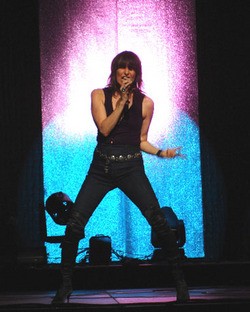 And then it was time for said dads to hide their sons and daughters. Chrissie Hynde was in town, skin-tight jeans tucked into stiletto boots, and packing an ass that she wasn't about to not use. In front of a black and silver back drop, she huffed and moaned opener "Bad Boys Get Spanked" and then a lovely "Stop All Your Sobbing" and then into Viva El Amor's "Pop Star" with a hot harmonica solo. And in case you were wondering, Hynde doesn't dye -- and she doesn't suffer fools up past their nap times. "That's OK," she said looking right at the sleepy rows stage right. "Save yourself for ZZ Top. They're going to be great." (Yes, Ma'am. Please, Ma'am. I'll sign any PETA petition you want, Ma'am.)

"Not everyone can be from a beautiful city like St. Louis," Hynde (whose tour bus obviously didn't pass through Crestwood) explained before "My City Was Gone." She knows some people paid $10.65 (plus service fees) for her bad assitude, so she brought it. "Sixty-four-billion farm animals are killed every year," she said by way of introducing the weak hit "I'll Stand By You." "If you don't care about that, we're probably not on the same page." In St. Louis, probably not.

Much better was "Back on the Chain Gang," which the reunion-goers finally got going for, as if it were the only song they could remember. And in case you were wondering, the band sounded like the Pretenders, though only Hynde and drummer Martin Chambers have survived from the original line up. Chambers, who played behind a fiberglass shield, looked like he couldn't be killed by death itself. If he sees a car in a ditch, he pulls it out with rope and his teeth—for kicks. Naturally, they ended with a singalong of "Brass in Pocket," with Hynde lying on her stomach at the edge of the stage to get the microphone to some guy who'd been waiting all night just to feel that special. 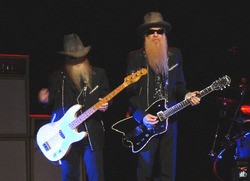 If you're still reading: I confess that I didn't want to stay for ZZ Top, but I did for a few numbers, though I can't say for certain Billy, Dusty and Frank showed. It might have been Gandalf the Greyer and his Amish second cousin lip synching and electric sliding to every La Grange-forsaken hit. I think the drummer was a walk on from The Transformers; he at least looked like a Decepticon behind that freaking arsenal.

But no it was ZZ, opening with "Under Pressure," on through a mean and funky "Waitin' for the Bus," "Jesus Left Chicago" (quickly corrected by Gibbons to St. Louis) and "I'm Bad, I'm Nation Wide." But you know, as good as they might have been and might still be, your own subjectivity is as implacable as your teenage traumas, and no titanic wall of boogie woogie sound is going to change that. I left after "Cheap Sunglasses." My own nap time was calling.

(All photos in this post taken by Dana Ponka of Mail Order Bridge Vintage.)