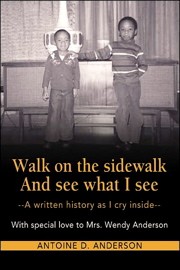 Some of you may remember the local hip-hop outfit Northside. For a time in 1995 the group's album Da Outsidas outpaced local CD sales from such homespun talents as Uncle Tupelo, Gravity Kills and Geyer Street Sheiks. Northside split up not long after that debut, but several of the players involved -- including "Da Outsida" himself, Antoine Anderson -- are still around today.

Earlier this year the 37-year-old Anderson published an autobiography of verse and short stories recounting his days in the street posse Gangster Disciples and the many tragedies that befell him as a teenager and young adult. The book's title, Walk on the Sidewalk and See What I See, says it all. Anderson writes of the death of both his parents when he was 21 years old and the more recent passing of his godmother, Lola Harper, who in many ways served as the inspiration for the book.

Anderson now works as a lab technician for Barnes-Jewish Hospital, and it's his hope that adolescents struggling with the same problems he faced -- gangs, peer pressure and family tragedies -- will find inspiration in his story. It's never too late to change your life. "Don't judge the road I walk," says Anderson, "but look at the work I leave behind."

Anderson will be signing copies of his book this Friday, July 20, from noon until 2 p.m. at the Barnes & Noble on the campus of the Washington University School of Medicine, located at 4905 Children's Place. For more information, call 314-362-3240.