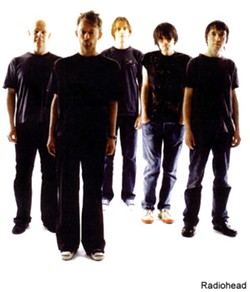 Via Chromwaves: Stereogum is hosting a tribute album to Radiohead's 1997 opus OK Computer, featuring A to Z faves such as John Vanderslice, My Brightest Diamond and the Twilight Sad (whose CD, Fourteen Autumns and Fifteen Winters, is in my top ten of the year so far)-- as well as hip cats Cold War Kids, Pedro the Lion's David Bazan and the Flash Hawk Parlor Ensemble (a.k.a. a side project from Chris Funk of the Decemberists) -- covering songs from the album. Way better than it has any right to be, the covers compilation is a must-download for fans and newbies alike.

1997 was a bizarre year for music, mainly because there wasn't a prevailing mainstream trend that dominated the airwaves. Teenpop wouldn't hit until the next year, while grunge was on its watered-down third-wave by this point. The indie rockers that did jump ship to the majors were the somewhat low-profile ones -- one gets the sense that labels were signing anything, in hopes they would stick; how else to explain the Apples in Stereo on a major label? -- while punk's mainstream presence was limited to Blink 182 and Green Day. (A setlist archived from the modern rock station in Cleveland from early 1998 shows the haphazard, scattered nature of the industry at this time; The Verve, Pulp, Hum, Chris Cornell and Whiskeytown, next to forgottens such as Cool for August, Fat, Bran Van 3000, Fretblanket and Huffamoose?) In short, the patchwork scene had room for just about any sort of music.

So after Radiohead did the unthinkable and shirked its one-hit-wonder status with 1995's singles-laden The Bends -- a quintessential Britpop album, even if it wasn't as overtly British as Blur, Suede or Oasis -- expectations were high when it came time for the quintet to release its third disc.

Starting a trend of stubborn non-conformity it would continue over the coming decade -- and further cementing its use of enigmas, slogans and innuendo which began in earnest after the release of cryptic video for The Bends' "Just" -- the band released "Paranoid Android" as Computer's first single, a six-minute song with an animated video featuring a quintessentially 1990s stoner-slacker dude meeting all sorts of grotesque characters (i.e., a rotund man losing limbs, dim-bulb politicians, etc.). Concise and accessible it wasn't; bizarre and inflammatory it was, with exhortations of "Ambition makes you look pretty ugly," and a musical progression that started with an innocuous, tick-tock drum beat and fluttery acoustic riffs, and then spiraled into ugly guitar squalls and jagged distortion -- before slowing down again into a slow denouement that turns almost hymn-like in its harmonies. An obvious commentary on modern society's gluttony, intolerance and cubicle culture, the song was political without being preachy, mysterious while still being overt.

The rest of the album was equally challenging: half near-straightforward pop songs, half unorthodox takes on pop structures. "Fitter Happier" uses the robotic, monotone "Fred" voice from the old-school Macintosh computer to recite rules for living healthily -- with the effect being that these same codes to live by were sterile and mind-numbing, like the Trainspotting "Choose Life" theme or the cookie-cutter suburbia of Edward Scissorhands. "Subterranean Homesick Alien" (yes, it's a reference to the Dylan song) features chilly, neon-green-hued keyboards that floated above and underneath the cries of "uptight, uptight" that emerge mid-song. Even more ornate is the hushed hymn "Exit Music (For a Film)," whose chords resolve in a lovely, orchestra-perfect major key around the phrase "We hope that you choke"; the preceding parts of the song -- and in particular Thom Yorke's murmurs of "Keep breathing" -- feel like the sonic equivalent of a candle flickering in the darkness of a church. The stern, spooky drone "Lucky" cresendoes in the same agonized way; the cry of "I feel my luck could change" seems empty, like a proclamation just before something really terrible happens, like the protagonist is hoping that by saying it, this hope will come true.

Elsewhere, "No Surprises" is a lullabye to suicide, where a glockenspiel chimes sadly as Yorke croons, "I'll take a quiet life, a handshake of carbon monoxide, with no alarms and no surprises"; "Electioneering" uses political metaphors ("voodoo economics") to critique, with squalling riffs and manic vocals from Yorke matching the song's claustrophobic tone. And the dour "Karma Police," an ode to staying unique in the face of conformity, used its minor-chord piano and Yorke's mournful whimper, "For a minute there, I lost myself," as a rallying cry for the tenuous grasp of individuality.

As a commentary on the increasing isolation and alienation within modern society, Computer was several years before its time; as an ominous warning about the effects of stultifying politics and dreary, soul-sucking day-jobs on people, it was dead-on. What's even more interesting is how succinctly a band of Oxford, England eggheads predicted the shift in the U.S. political and social climate that happened in the coming half-decade. Bill Clinton was still the president in 1997, domestic terrorism was of no concern and Saddam Hussein's threat was a faded memory of the Gulf War. America had no particular reason to be fearful or, well, paranoid. But the world Radiohead created within Computer was fragmented and suspicious, mistrustful and fearful -- feelings that today feel like a prescient glimpse into a country that was soon to be ripped apart by violence and beholden to empty sound-bites and lip service.

One could say that the band was at the top of its game on the tour after the album was released as well. According to Green Plastic, the band played the old Galaxy in St. Louis (setlist here) in August of that year. But I know I saw them in Cleveland at the Lakewood Civic Auditorium after a long day at band camp several days later. I don't remember much of the show -- besides that Teenage Fanclub blew me away as the opener, and that I bought a T-shirt that says "Kicking Screaming Gucci Little Piggy" on the front -- except that the power went off somewhere in the middle of the set due to inclement weather, and Thom Yorke did an acoustic version of "Exit Music" that was astounding, and the band played b-side favorite "Talk Show Host."

The band pretty much exploded into the stratosphere soon after this tour and became the arena- and stadium-sized act it is today. But OK Computer to many is still its watershed moment. Both futuristic and of its time, the album is and was a warning that lurking below the shiny happy gloss of a booming economy is the other shoe -- ready and waiting to drop.