The Bluebird: All About St. Louis' New Club 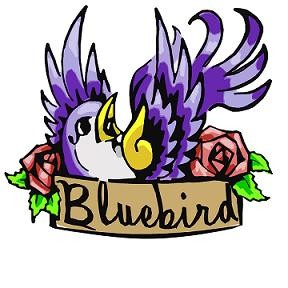 Much buzz has been flying (ha!) around the city about new venue the Bluebird. Located at 2706 Olive Street (the nearest cross-streets are Leftingwell and Beaumont, which means it's between Grand Center and downtown -- and a block or so west of Jefferson Avenue) and adjacent to area resturant mainstay Beffa's, the club is holding its grand opening this Saturday, July 14, with a concert featuring Ghost in Light, Stella Mora and the Feed. (There will also be an open house on Thursday night, July 12; see below for more information.)

A to Z caught up with venue curator Mike Cracchiolo and got the scoop on all things Bluebird.

Annie Zaleski: Give me the vital statistics of the club: Capacity, hours, age limit, parking situation, etc. Mike Cracchiolo: 300-person capacity, 18+, 1:30 a.m. bar. Doors open at 8 p.m., and the venue is only open on nights when there is a show. There are two parking lots, one in back and one to the side of the venue, both of them free. I couldn't tell you the number of spots off the top of my head, but there's also all of Olive if they get filled.

What are your official duties at the club? Basically, I'm in charge of booking, promo, production and door. With time I hope I'll be able to delegate some of that.

What is your philosophy in running the club? Well, things have happened so fast I'm not sure I've had time to figure that out. But I guess my basic focus is to showcase good music -- to never have a "filler" night, as it were -- and to treat the bands with respect and decency.

How long has this venue been in the works? How did it all come about? I'd been looking into opening something up for a while. I think a lot of people have been, ever since the Hi-Pointe and Fred's [Frederick's Music Lounge] closed. Even as far back as Rocket Bar. As far as this location, it was pretty much all a happy accident. I had been scouting places with the plan of finding investors and building a place from the ground up. And I came across Mike Beffa, who was sort of trying out the waters as far as bringing in live music to this unused space he had, and made him an offer.

An offer to what? An offer to start booking original music on sort of a trial basis, and see how people responded.

What sorts of bands/genres are you looking to book? Local, national, regional, etc.? All the above. There's already been interest from promoters and booking agents for regional stuff, and we've got Ladybug Transistor coming in on July 29th from Brooklyn. I would imagine it's just a matter of time before we start pulling down some bigger shows. As to genre, I don't really have any guidelines. Except quality. I'm not out to lose money, but I'm not above giving a small local a shot if I believe in what they're doing. Or a new band, or whatever. I'm pretty open-minded about it. I'm constantly impressed by bands I've never seen or heard of before. I mean, I know it sounds naive, but I'd like to see this place become a resource for St. louis music, fans and bands alike.

That's what I was going to ask you next: What sort of influence/impact do you hope to have on St. Louis -- both the city and the music scene? Well, as a musician [Cracchiolo is the Bureau's bassist], I'd like to see bands and venues treat each other with a little more respect, I guess. I don't know if that's something we can help to change, but I hope so. Common courtesy goes a long way in this business. People assume that it's constant playtime to be in a band -- but the truth of it is that a lot of it is really, really hard, thankless work. So when you show up at a club lugging a ton of gear, the last thing you want is for some club owner to talk down to you and treat you like a nuisance. By the same token, when you're a promoter or a owner bringing a band to a stage, it's like they're walking into your living room. It's a symbiotic relationship, but I don't see any reason why it should be an antagonistic one.

What sort of niche do you see the Bluebird filling in St. Louis? There are a lot of other clubs opening on the horizon, so I think it could be a while before the dust settles. I'd like to be the place that music fans can rely on. I don't want it to be some exclusive place; I want to help expose people to new stuff. I want people to know that they can catch a cool show even if it's not their favorite genre or whatever. Ultimately, as trite as it sounds, I want it to be about the music. Because that's what it's about for me.

Tell me about the open house happening this Thursday night. It's just a chance for people to come down and get acquainted with the place before we start doing shows; sort of an informal celebration for everybody who helped get us up and running and a chance to show it off to anyone who is curious about the place. We're providing free appetizers and we've got DJs Commiekay and Deadasdisco spinning. It goes from 7-11.

How do you get tickets? Tickets are available for free from our website, www.bluebirdstl.com. It's a free download.

(Or print out the image below!) 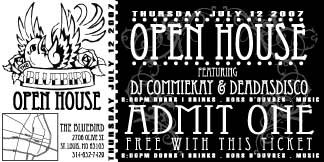