When the Schlafly family made their way to the United States from Switzerland in the mid-1800s, they put down roots in Highland, Illinois. That's why the brewery's new brew pub location, Schlafly Highland Square, feels like a homecoming.

"For the Schlafly's, this is where they immigrated when they came from Switzerland, and some of the first Schlaflys [in the United States] are buried in Highland," says Wil Rogers, director of marketing for Schlafly Beer. "Their ancestors are buried here. Those roots are what brings us back here, which is really cool."

Schlafly opened its Highland location on December 22nd. This is the fourth brew pub for the brand and came just days before the brewery celebrated its 30th anniversary on December 26th. In keeping with the spirit of the three other locations, the new pub has a distinctive Schlafly feel while being uniquely tailored to the community.

The Highland vibe is noticeable even before you walk into the building. Situated directly on the small town's popular square, the new restaurant resides in a former bank, which dates back to the early 1900s. The Schlafly team made sure that the new spot would flow directly into that pedestrian area by creating a patio and grassy outdoor green space that looks out over the square.

Inside, they maintained the architectural integrity of the former bank's Art Deco style by refurbishing much of the original structure, including columns, molding and light fixtures. The indoor space is painted in the same cream, mauve and mint green as the renovators believe the originals colors to have been. Even the bank's safe has been preserved, occupying a position of prominence behind the wooden bar.

Schlafly has catered the Highland brew pub's menu to the town's historic Swiss roots as well. Though the offerings include the burgers, salads and flatbreads found at the brand's other locations, the Highland location has more of a Swiss-German inflection. Dishes that underscore this theme include the "Proper Fondue for Two," a dip made from molten goat and Alpine cheese and proper cider served with smoked sausage, apples and bread for dipping. Other Highland-specific dishes include: jagerschnitzel, which is a pork cutlet, served with mushroom bacon sauce and mashed potatoes; kasespaetzle, a baked spaetzle with ham, Swiss cheese, caramelized onions, chives and breadcrumbs; and "Thighs and Pies," a dish of two buttermilk fried chicken thighs served alongside a spinach and sweet potato hand pie and covered in white gravy.

"This is a very historic Swiss town, and there is this smaller town vibe, so a lot of that comes out in the menu," Rogers says. "The menu is always a great avenue to give each place a little bit of its own fingerprint."

To that end, director of pub operations Andy White is making an effort to include area vendors as much as possible on the menu. From Marcoot Creamery cheese, which is located nearby, to Ski Soda, Frosty's Root Beer and produce from Illinois farmers, the Highland location will showcase the bounty available in area.

In the future, Rogers says that the Highland location will have its own beer brewed specifically for it. Called the "Highland Lager," the forthcoming beer will be a light, approachable American style lager, which will cater to drinkers who may be intimidated or turned off by the idea of craft beer.

Rogers also says that the Schlafly team is open to to doing special events in conjunction with the city and hopes to participate in whatever happenings are taking place in this vibrant community.

"Highland loves their town square, so there is always something going on here," Rogers says. "Much more than the other three, this place really feels ingrained into the the community." 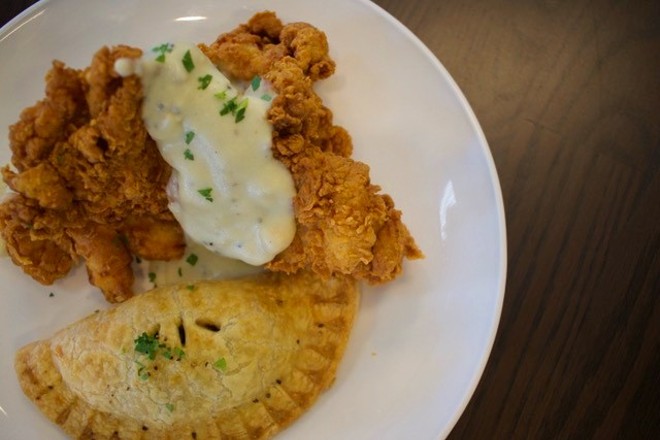 We are aways hungry for tips and feedback. Email the author at [email protected]