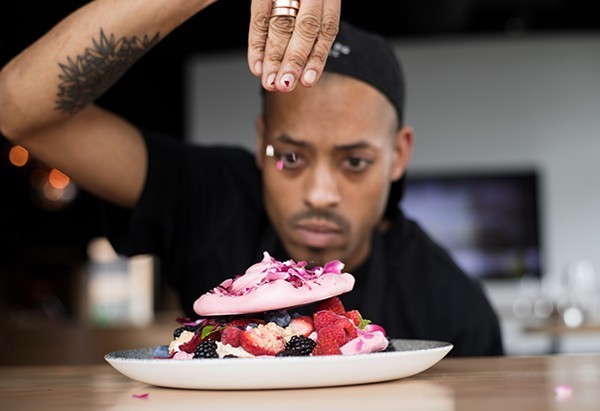 St. Louis pastry enthusiasts may be well-versed in the many talents of chef and artist Tyler "Tai" Davis, but the rest of the country is about to see his skills for themselves. Tomorrow night, Davis will compete on Disney +'s Foodtastic, a new, eleven episode series that brings to life magical Disney scenes through food.

In this week's episode, Davis joins two other contestants as part of a three-person team competing to win the coveted Foodtastic Disney enamel pin, as well as bragging rights and national acclaim. The challenge involves contestants creating edible masterpieces that capture the essence of Disney's Ant-Man.

In a release discussing tomorrow night's theme, Davis and his cohorts are given the scene: "A lab tech dreams of becoming Micro-Girl, and with help from the "Foodtastic" food artists, she saves the day with Ant-Man and the Wasp." Contestants then create edible sculptures around the scenario "that will be judged purely on their design, technical skills and and narrative, and not by taste." The judges responsible for crowing the winner are Benny Rivera of New York City's City Cakes and prolific cake artist to the stars, Amirah Kassem. Emmy Award nominated actress Keke Palmer serves as the show's host.

The eleven episode series drops in its entirety tomorrow on Disney +. You can watch the trailer to get a preview of the action here.