Rock Star Tacos to Partner With The Factory 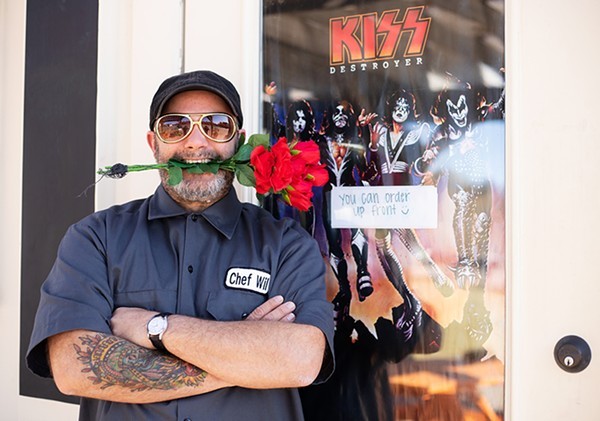 In just four short months of business, Chesterfield's world-class venue, the Factory, has already welcomed its fair share of music's heavy hitters. Now, it's about to play host to a different kind of rock star. The venue will soon be serving food from Rock Star Tacos (multiple locations including 4916 Shaw Avenue) thanks to a newly-minted partnership with chef Wil Pelly and his partner, Rebecca Schaaf.

Pelly confirmed the deal yesterday afternoon, explaining that he has been in talks with The Factory about possible food opportunities since it opened this past July. There, at a friends and family event, he and Schaaf talked with some of those involved in the venue's operations, who explained to them that they were looking to provide food to hungry concertgoers, but had not yet settled upon the right fit. The arrangement grew from there.

For Pelly and Schaaf, the partnership with The Factory is natural. Since opening Rock Star Taco Shack in New Town in 2019, the music-inspired brand has catered for several acts that have come through the nearby Hollywood Casino Amphitheater. For Pelly, who is also a prominent musician, the chance to marry his two passions has been one he has eagerly embraced, and he has positioned Rock Star Tacos as a natural fit for hungry musicians.

At the Factory, though, it's the general public who will get to nosh on his delicious wares. As Pelly explains, the setup will be more like a large catering gig; he and his team will drop off tacos in advance of a performance, and The Factory will then sell them out of one of its concessions stands. Employees of the venue will man the stand, and the tacos will be available on a first-come, first-served basis.

To start, Pelly and Schaaf will be offering three different varieties of Rock Star Tacos: the "Jumping Jack Fruit Flash," which is a vegetarian option featuring green chili-stewed jack fruit, the "Number of the Beef," which features ground beef, shredded lettuce and "Fancy Sauce," and the "Thunder Cluck," made with chipotle and maple pulled chicken. Though the pair hope to add to the offerings down the road, they want to take things slow to see how things go.

Rock Star Tacos, which just opened a brand new location on the Hill last week, will launch at The Factory on December 2, debuting at the Old Dominion show. For Pelly, it's a bit of a laugh to think that what started out as a funny idea between he and his bandmate over whiskey and tequila has turned into a bona fide food phenomenon with an outpost in Chesterfield.

"It's pretty exciting to be in a place I never thought we would be," Pelly says. "I never thought I would have a little satellite location in Chesterfield. It's pretty crazy, but rock and roll and tacos, man..."