St. Louis Is, in Fact, the Best Doughnut City in the Country 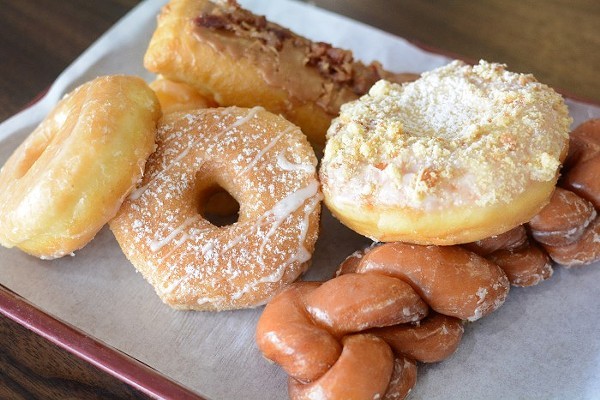 If you've ever rounded the bend of Chippewa Street near Landsdowne only to jump for joy at the sight of Donut Drive-In's neon sign, wandered into Florissant's Old Town Donuts at just the moment the apple fritters are being pulled from the oven or been hurried along by former Wold's Fair Donuts matriarch Peggy, in all of her blue eye-shadowed glory, you know one thing: St. Louis is the doughnut capital of the United States. Possibly the world. Like our dive bars, no one does classic, indie doughnut shops like the Gateway to the West. It's our thing.

That's why it came as such a shock — nay, insult — when the online platform Rent.Com released its list of the Best Cities for Donut Lovers this morning and St. Louis failed to crack the Top Ten. It didn't even make the Top 50, ceding doughnut superiority to such obvious fried dough inferiors as McKinney, Texas (the number one spot), Providence, Rhode Island and Orlando, Florida. Orlando, Florida?

Now, we're not ones to give much credence to these clickbait-y articles designed to drive traffic to websites (outside of the ever-present need to create content for our own publication; doctor heal thyself), but something about this slight felt viscerally offensive. Our doughnut culture runs deep, weaving through the bi-state region like a sweet, yeasty-scented thread that connects such disparate locales as Affton and St. Peters, North County and South Broadway — in a metro area more often associated with what divides us than what connects us, doughnuts may be the closest thing we have to a unifying force. To be told that Tempe, Arizona has a superior doughnut culture to our storied tradition is simply too much to take.

Now, Rent.Com might argue that it's rankings are scientific and that the data doesn't lie. They took the 150 most populated cities in the U.S., tallied up the number of doughnut shops in each of these cities, then calculated the proportion of doughnut shops per density and per capita. OK, so we are talking purely about volume here, which is likely why the Northeast, where you can't swing a dead cat without hitting a Dunkin, is so over-represented in the Top Ten.

It takes the sting out to know that Rent.Com is simply looking at quantity and not quality. Still, when you are talking about something as sacred as icing-covered fritters, to rely on a strictly data-driven analysis without regard for the intangibles that make doughnuts one of life's purest joys is pure bunk. We know the truth, and we will celebrate it over a best-in-class old-fashioned buttermilk cake any day of the week.