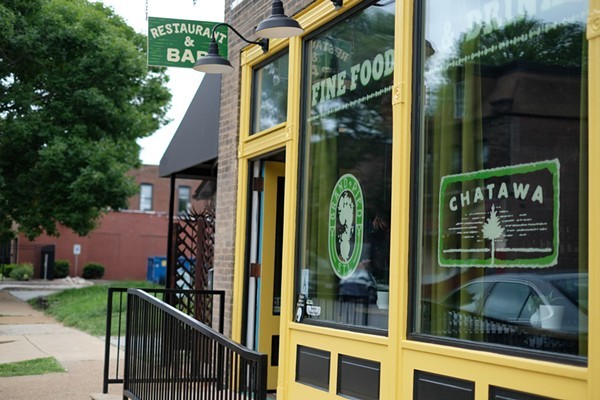 Update: The following article has been updated to reflect comments from Chatawa owner Thomas Crone.

Chatawa (3137 Morgan Ford Road), the much buzzed about bar in Tower Grove South that opened late August of this year, will close after service this Sunday, October 31. The announcement was made Wednesday afternoon on the bar's Facebook page.

The bar, located in the heart of the Morgan Ford business district, was the brainchild of veteran barman and former Tick-Tock Tavern co-owner Thomas Crone, whose vision was to create a food and drink inspired journey down the Mississippi River, from St. Louis to New Orleans and stops in between. Intentionally bucking the beads and Mardi Gras masks caricature of the Big Easy, Crone described the space as being a true New Orleans bar inspired by the city's neighborhoods and injected with a healthy dose of St. Louis.

Crone seemed to have succeeded in that vision. Almost immediately upon opening, Chatawa had the feel of a watering hole that had always been there, even though it had only opened on August 18. Warm, cozy and Venice Cafe-styled in its quirky, tchotchke-heavy decor, Chatawa was named the staff pick for the year's best new bar in The RFT's Best of St. Louis issue.

Crone gives no reason for Chatawa's closure in the Facebook post, stating simply that, "Chatawa, as an individual business, will enjoy a LAST week of service THIS week," closing the post by noting, "It's been an interesting experience!" Guests are invited to come in for a meal and a drink or to purchase its retail  beers, natural wines and liquor to take home.

However, in a statement to The RFT, Crone cites a few reasons for why he made the decision to close Chatawa. The first has to do with product sourcing. Crone was fiercely committed to offering products from the St.Louis-New Orleans Interstate-55 pathway, but he found that he was simply unable to do so, thus undermining the reason he opened the bar in the first place.

"We weren’t able to translate our vision of importing  items into St. Louis from New Orleans and that I-55 pathway, despite begging, pleading and cajoling our distributors," Crone explains. "Trying to buy niche products within the current distribution system is a tough task and we lacked the buying power, social capital and/or other necessary magic to make this happen."

Crone continues that another issue the bar had was that sales did simply not allow it enough time to get up and running. He notes that Chatawa could have slid by for another month or two at its current rate of business, but that he felt the right decision was to end things now. He further notes that he regrets not being able to fully explore his plan to donate one-percent of sales every month to local arts non-profits.

As for Grand Pied, the food component run by chef Tony Collida that shares the location with the bar but operates as its own separate entity, Crone is more optimistic, and felt that closing Chatawa at this point in time will give Grand Pied the space it needs to thrive as an independent, standalone concept.

"My goal is to let Grand Pied make announcements of their own re: their next steps," the post reads. "I can confidently say that they'll continue on at 3137 Morganford and are making moves to ensure a long and successful run here. I'll root them on for sure."

As for what that looks like for the time being, Crone says that Grand Pied is currently working on securing a liquor license under its own LLC but will operate under a BYOB policy until that goes through. Service will resume for Grand Pied on Wednesday, November 3, and it will be open Wednesdays through Fridays from 4 until 9 p.m., as well as for brunch service on Saturdays and Sundays from 9 a.m. until 3 p.m.

GREETINGS and a special ANNOUNCEMENT!

CHATAWA, as an individual business, will enjoy a LAST week of service THIS week, with the following hours: Weds-Fri: 4-10 pm Sat-Sun: 9 am-3pm.

We have a reasonable amount of of liquor, beer and natural wines in-stock for retail purchase and would love to sell these items to you! It's likely that we'll move into some savings mode as the week continues (wink-wink), but the good stuff's here now. Avail yourself of these delicious, take-home offerings. We'll sell items from our back bar as they last, too, including all the local and regional fare that we've highlighted to date.

My goal is to let Grand Pied make announcements of their own re: their next steps. I can confidently say that they'll continue on at 3137 Morganford and are making moves to ensure a long and successful run here. I'll root them on, for sure.

Come in and say "hello" if you've already been through, or please introduce yourself and have a first meal-and-drink within our still-shared walls. Looking forward to a great week ahead, preceding an immediate jaunt to New Orleans next week for some R&D and R&R.

It's been an interesting experience!

This is Thomas, signing out for today. Expect to hear a bit more from me on FB and IG throughout the week. Cheers!