Switchgrass Spirits Opens Its Distillery to the Public This November 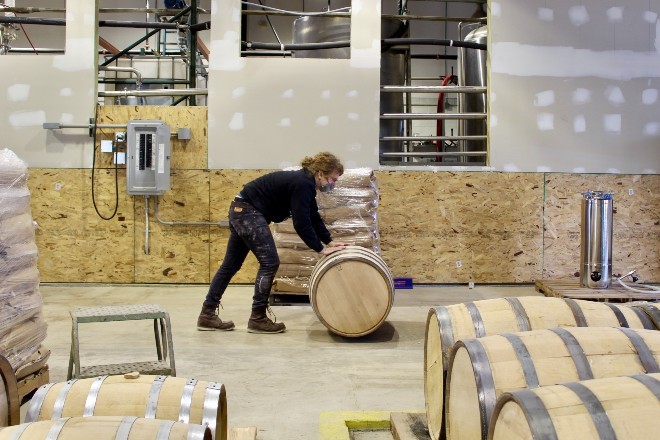 Three years after its founding, local distillery Switchgrass Spirits is ready to open its doors to the public. The north St. Louis-based company has announced plans to offer tours of its facilities, complete with a tasting the first Saturday of every month. Tours, which are free and must be reserved in advance, will begin Saturday, November 6.

"We started presenting our products to the public in February of 2020, and were so busy that month with bottling and labeling that we weren't in a position to do tours," says Switchgrass founding member Sarah Miller. "We kept saying, 'We're going to do tours; it's going to be great!' But then COVID happened and we felt like it's wasn't a good idea to have a bunch of strangers coming through."

The distillery tours are just the latest development for the company, which is poised to take the whiskey world by storm with its unique offerings. Though Switchgrass is three years old, the lengthy lag time that goes into starting a distillery means the brand is just now at the point where it can fully showcase its mission to produce high-quality whiskey that will put Missouri on par with producers from more storied regions, such as Kentucky.

"Distilling gives a lot of value to things like corn, apples and oak — things that are from Missouri that we wanted to give more value to and showcase the Midwest in a different way," Miller says. "It's not just Kentucky that makes whiskey. Missouri is great and very favorable to alcohol makers because we have great water and oak that is used all around the world. You go to Scotland, where all the famous Scotches are being made, or even California wine country, and the barrels are from the Ozarks. People know Missouri oak is great, but people in Missouri aren't utilizing it as much as they could be. We are happy to be here and do that."

As Switchgrass distiller Nick Colombo explains, the secret to what he believes will be the brand's success is how its whiskey is distilled. Both he and his fellow distillers at Switchgrass have backgrounds in brewing beer, and apply what they learned from that process to making whiskey. Known as sweet mashing, the process yields what Colombo describes as a more artisanal product that can be enjoyed with less aging than other whiskeys.

"We make our whiskey differently than anyone else," Colombo says. "With sweet mashing, you spend more time and money babying the yeast; to do that is harder, but it tastes better sooner because it doesn't have that burn that a lot of young whiskeys have."

As Colombo explains, sweet mashing, as well as doing batch distillations, makes Switchgrass' whiskey taste fundamentally different than those made using other processes. He and his team also use a "cut to taste" method of separating out the head, heart and tail of the distillate, which requires more skill.

"We know when its fresh-baked bread or cherry or apple flavors, and we pick and choose every flavor that goes into the bottle rather than what the still gives us," Colombo explains.

Colombo points to Switchgrass' one-year whiskey as evidence of the method's ability to produce a quality spirit. Though such a young whiskey should be harsh and unpleasant to drink, he and his team were surprised with how enjoyable it was to sip.

Now that Switchgrass is poised to release its two-year rye, as well as open up the distillery for tours, Colombo and Miller feel that the company has made it through the difficult startup period — something that was especially challenging for their brand because of their refusal to engage in the common practice of selling other companies' whiskey while waiting for theirs to age. With the new release, the tours and a series of upcoming cocktail classes on deck, Colombo, Miller and their partners feel like they can breathe a sigh of relief that what they wished for is finally coming true.

"We took a year building out the building, a year distilling and now have our two-year product," Miller says. "Whiskey definitely teaches you patience and that good things will come if you wait."