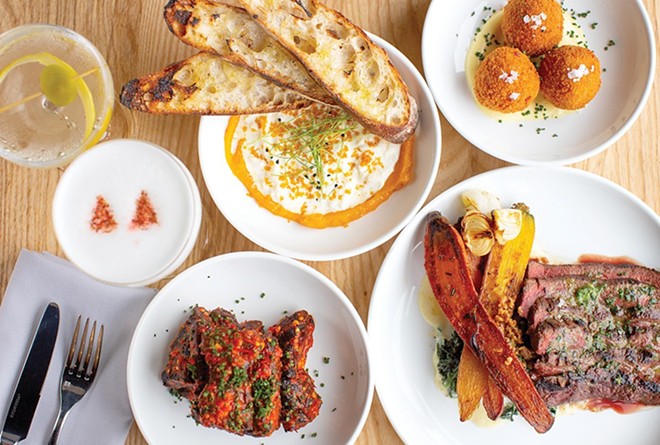 After a year-and-a-half defined by challenges, uncertainty and, at times, utter distress, Craig and Mowgli Rivard have reason to celebrate. Little Fox (2800 Shenandoah Avenue, 314-553-9456), the Fox Park eatery the husband and wife team opened together in December of 2019, has been named to the prestigious The New York Times Restaurant List for 2021.

"Through all of this you get really good at having unexpected things happen," Mowgli laughs. "It's nice when they go in this direction."

The New York Times published the annual restaurant list on October 12, placing Little Fox among "the 50 most vibrant and delicious restaurants of 2021." According to the paper, the selected restaurants "reflect the rich mosaic of American dining," representing both old and new restaurants from a variety of culinary traditions.

In making its claim for Little Fox to be among those 50 spots, author Brett Anderson describes Little Fox as being heir to the tradition of the great "corner bistro that punches above its weight," noting that Craig's cooking leaves you "convinced he's making wise choices with the best ingredients he can find."


For the Rivards, the honor is particularly satisfying because it shows that they were successful in translating their vision for Little Fox into reality.

"We wanted to be a modern neighborhood restaurant, and as short as the write-up was, it was clear that they got it," Mowgli says. "That's the most exciting part — knowing you put something out there and were successful in getting across what you wanted to be."

Though the Rivards are thrilled about what the honor means for their restaurant, they are also excited about how it reflects on St. Louis. In Mowgli's mind, they share the nod with their fellow hospitality professionals who all do their part to make the city's restaurant scene so ascendent.

"This just adds to St. Louis getting more and more known for its restaurants," Mowgli says. "That's exciting for everyone."