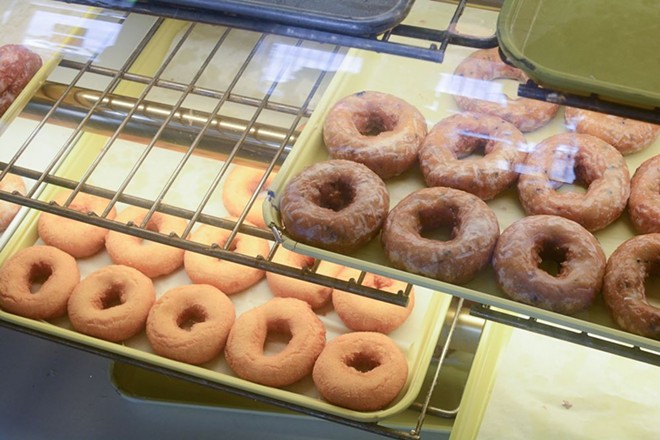 When Robyn Dietrich talks about how much she cares for her customers, she’s not simply referring to what goes on within the four walls of her Florissant doughnut cafe, the Doughnut Cupboard (1115 Lindbergh Boulevard, Florissant; 314-921-1105). To her, it’s one thing to serve her guests good food while she’s on the clock, but it’s equally important that the relationship doesn’t end when they pay their check.

“There is one woman who I called the other day just to check in on her,” Dietrich says. “I asked her, ‘Doris, do you need anything?’ She told me no, because a neighbor was helping her out, but I told her, ‘Listen, I’m going to Aldi — please let me bring you something.’ She said she would really love some chicken salad, but that she didn’t want to ask me to do that. I told her that I was going there anyway and that she was on the way home. She was so appreciative, and I was happy to do it. This is pretty much my life, but I love it because these are the people who, when my parents died, have been there for me.”

Those personal touches, and the knowledge that Dietrich and her staff truly feel that their customers are family, is what makes the Doughnut Cupboard an essential — if under-the-radar — part of the north-county dining scene. Since 1975, the small cafe has been serving its patrons some of the best doughnuts in the area, first under the watch of the original owner, Tony Ozenkowski, and next, under Dietrich and her husband John, who bought the shop in 1983.

As Dietrich explains, her husband, who had a background in the doughnut business, planned on opening a restaurant of his own — just not the Doughnut Cupboard — when he bought the place 38 years ago. Instead of an independent shop, John was actively looking to run a Mr. Donut franchise in the Florissant area when he stumbled upon the Doughnut Cupboard opportunity. Back then, Ozenkowski was experiencing heart troubles and looking to get out of the business; though his nephew, who was a baker at the shop, seemed like the natural heir, he had no interest in taking it over, so Ozenkowski was in need of a buyer. For John, an established business with a regular clientele was just what he was looking for, so he switched course and became an independent doughnut shop owner.

When John took over the Doughnut Cupboard, he expanded its footprint to include the adjacent storefront, where he set up an ice cream shop. “He tried different things to see what would work out,” Dietrich explains. However, when he realized the extra space wasn’t worth the effort and rent, he consolidated the operation into its current space. Still, he felt that the place should offer more than doughnuts and, over time, he expanded the menu to include breakfast, lunch and the restaurant’s current specialty: doughnut sandwiches.

“When all the gas stations started having doughnuts, we had to figure out a way to make ourselves stand out,” Dietrich says. “We didn’t have a background in cooking — just a stove back then — but we wanted to give people a wide variety of choices. Some people can come in and get doughnuts and the other people at the table can have breakfast. It was something that we could easily do to differentiate ourselves.”

Still, doughnuts remain the Doughnut Cupboard’s bread and butter, even though the shop remains something of a hidden gem, albeit one sitting in plain sight. It sits in a strip mall directly on North Highway 67 in the heart of Florissant, but it’s not uncommon for Dietrich to hear people say that they never knew the place existed. However, once people try the doughnuts, they immediately understand what they’ve been missing.

“We make doughnuts like they used to make in the old days,” Dietrich says. “We mix in the mixer, throw the dough on the table, hand-roll them out with a roller and use hand-cutters to cut them. When people use machines, it makes for a tougher doughnut. We don’t feed ours through any machines, which is why they are so tender. It’s more grunt work, but I think that’s what makes them so good.”

Classic glazed and chocolate long johns are the shop’s most popular offerings, and the Doughnut Cupboard has a cult following for its enormous apple fritters. But Dietrich senses that the warm feel of the place and the staff’s efforts to make everyone feel welcome is why people keep coming back. Like a lot of small cafes and restaurants around town, the Doughnut Cupboard has its daily regulars, mostly older retired men, who come in more for the socialization than they do the coffee and doughnuts. One of the shop’s most beloved customers, a former mailman named Dan who passed away last year, is memorialized on the wall behind the front pastry case as a way to ensure his presence is still felt at the counter where he sat every single day. Dietrich says the shop has so many regulars like Dan, and she wishes that she would have started taking pictures of them from the very beginning as a reminder of every one whose lives the Doughnut Cupboard has touched over the years.

“We had a couple of regulars who moved away, and when they came back they said they always consider us like their Cheers,” Dietrich says. “We treat everyone like we want to be treated. The girls who work here are awesome; we’re such a small group and not a franchise, so we really take pride in what we do. I think we try to make everybody feel comfortable and like they are at home. Everybody is welcome here.”

We are always hungry fort tips and feedback. Email the author at cheryl.baehr@riverfronttimes.com.