St. Louis Standards: Cyrano's Has Been Serving Sweet Treats and Memories for 61 Years

Melissa Downs is used to people pouring their hearts out to her with memories of dining at Cyrano’s Café as soon as they learn she co-owns and manages the beloved dessert and dining destination. Sometimes, however, their timing isn’t the best.

“I run into people all over St. Louis from all walks of life who tell me about their memories,” Downs says. “One time, my dentist launched into a long story about how he went there with his wife. When I gave birth to my daughter at St. Mary’s Hospital, and the OB nurses found out I owned Cyrano’s, they all came and told me how they used to come over, get Cleopatras to-go, bring them back and eat it at the nurse’s station.”

Downs knows that hearing those stories at every turn comes with the territory of owning a St. Louis dining institution, one that has been serving some of the city’s most iconic desserts since 1960. And that’s one of the things she loves most about her job. Married into the family that has been running Cyrano’s since 1979, Downs understands that she has a responsibility to be a steward of those memories for people, some of whom remember the original location on Clayton Road and Demun Avenue.

That spot, which was opened by John and Francis Marshall 61 years ago, was the go-to place in the St. Louis area for desserts and European-style coffee drinks — beverages that may seem ubiquitous today but were ahead of their time in the pre-Starbucks era. Housed in the basement of a building that had a hi-fi stereo store above it, the original Cyrano’s was dimly lit and intimate, its soundtrack provided by a reel-to-reel tape player that kids in tuxes and formal dresses would sway to as they waited for their tables after attending prom.

In 1979, a fire tore through the building and destroyed the original location, prompting the Marshalls to relocate to a storefront on Big Bend Boulevard just around the corner. Not long after, they opened a sister restaurant in Westport Plaza called De Bergerac’s, but when it failed to take off the way that Cyrano’s did, they shuttered it and decided to reevaluate whether they wanted to keep going in the business. Though they continued to run Cyrano’s for a bit longer, they eventually sold in 1985 to the O’Donnell family, who turned the establishment into a place as equally focused on dinner as dessert. Reinvented as a fine-dining restaurant with steaks and seafood, Cyrano’s operated under the O’Donnells’ watch until 1996, when they sold it to Carolyn and Charlie Downs, Melissa Downs’ in-laws.

Though the sale gave Carolyn and Charlie the rights and furnishing to Cyrano’s, they were not yet ready to go all-in on running the place. This was because they were focused on helping with another titan of St. Louis’ restaurant history: Harvest. Together, Charlie Downs, Steve Gontram and George Mahe built up the iconic eatery, with Carolyn in charge of its most notable dish.

“The Harvest bread pudding is Carolyn’s original recipe,” Melissa Downs says. “She’s an incredible pastry chef who started baking pies and desserts for the restaurant out of her kitchen. Her father owned a diner in Illinois, and she never went to [culinary] school; she’s entirely self-taught.”

In 2003, Carolyn and Charlie decided that they were finally ready to go off on their own and invest themselves fully into reopening Cyrano’s. They found a new location, still on Big Bend Boulevard, but down the road in Webster Groves, where they have been ever since. There, in a light-filled space that used to house the outdoor retailer the Alpine Shop, the elder Downs worked hard to recreate the joy of the original and second Cyrano’s locations while keeping things current. They measure their success in the regulars they have gained throughout the years — some new to the current spot and some going back decades — and have delicately balanced the importance of keeping old favorite dishes while offering new items for the current generation of diners.

Now, Cyrano’s is in the hands of Melissa Downs, together with her husband Chip and her brother-in-law and his girlfriend, who have all committed to carrying forth its legacy. This includes making sure that they offer some of the original favorites, like the Cleopatra — which consists of French vanilla ice cream, bananas, strawberries, rum sauce, gold brick and whipped cream — as well as the tableside flambes and World’s Fair eclairs, while also perfecting classic comfort food desserts like chocolate cake and apple pie.

Downs knows people keep coming back because the desserts are excellent. Taught by his talented mom, Chip is now at the helm of the pastry kitchen, working hard to make sure that whatever he serves, it’s the best version of what it can be. However, if Downs has to put her finger on what makes the restaurant so special to people, it’s less about a particular dish than what that dish represents.

“I think a lot of it is the tie-in to memories,” Downs says. “People celebrate special things here — baby showers, anniversaries, birthdays. People get engaged here. Also, because we are a family-run place, the majority of our service staff has been here for years. We have low turnover, so guests get to know the wait staff, and they develop relationships. That means a lot to people.” 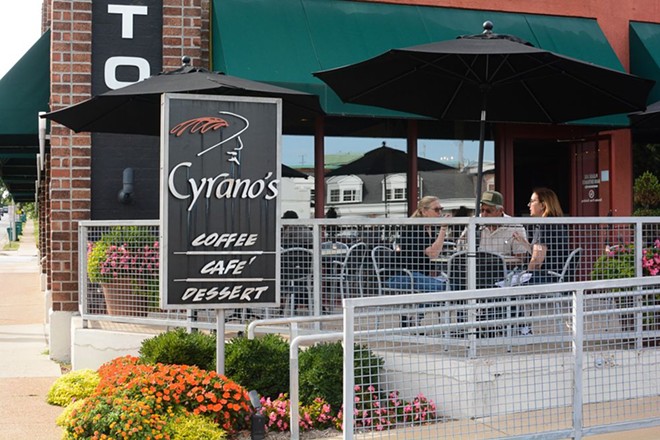 The foundation of those relationships, particularly in the minds of their regulars, is the trust that Downs and her family understand their vital role in keeping tradition alive — something they are committed to doing because they all understand that, no matter how delicious those Cleopatras are, what they meant to people goes well beyond the taste.

“People want to hang onto that tradition,” Downs says. “There’s a lot of meaning and emotion that people associate with food. Whether it’s dessert that Mom made for birthdays or what you had for a particular occasion, people associate that they ate this thing at a certain time in their life, and when they eat it again, they are brought back to it. It’s great to see when something jumps them back to that time in their lives, and it’s so cool to be able to provide that to them.”