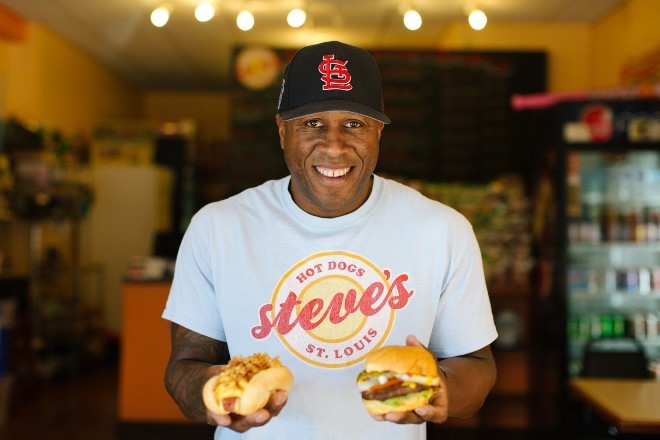 Not even two years ago, Steve's Hot Dogs (3145 South Grand Boulevard, 314-932-5953) announced it was closing up shop for good — news that caused such an outpouring from the community that owner Steve Ewing changed course and found a way to keep the beloved restaurant alive. Now, together with his business partners Danni and Marcus Eickenhorst, Ewing is cutting the ribbon on a brand-new location in the heart of the South Grand business district, one that triples the size of the previous spot in Tower Grove East and provides the space to become the community gathering place he'd always envisioned.

"I can't really explain it," says Ewing when asked about the journey that led him to the new location. "It's been a wild ride."

That wild ride began eleven years ago, when Ewing first launched Steve's Hot Dogs on the Hill. Inspired by the street food he got to experience in other cities around the country after playing with his band the Urge, Ewing dove into the food business, first as a small food cart stationed outside of a soap factory in North St. Louis and eventually expanded his offerings and started doing festivals. The success he achieved with the cart propelled him to look for a storefront, and he found one in the Hill neighborhood, where he set up shop in 2011.

Ewing eventually went on to expand Steve's Hot Dogs to include his Tower Grove East restaurant, which became the solo location after the Hill one closed in 2019. When the Tower Grove East was on the brink of closing as well, he partnered with longtime friend and business collaborator Danni Eickenhorst, along with her husband Marcus, to breathe new life into the business.

The new South Grand location is the culmination of those efforts — a storefront that will allow for expanded seating, a large outdoor patio that connects to the adjacent Ritz Park, and space for music and other events that are near and dear to Ewing's heart. Located in the former Mangia, a restaurant that made a name for itself as a beloved late-night bar destination, the new Steve's will carry on that community gathering place spirit.

"I think this is the way Steve's was always meant to be," Danni Eickenhorst says. "The music component, the way the patio connects to Ritz Park so people can overflow into it, the outdoor music, partnerships with South Grand for programs at the park like an arts walk and other community events — there's so much energy, and we hope, together with the new Padrino's that opened right there too, this will be a big boost to the street."

Ewing notes that the menu will remain essentially the same at the new Steve's, so guests can rest assured that they will be able to get the hot dogs they have come to know and love over the years. However, he does note one exciting addition: A line of French fry offerings with the same types of creative toppings as the hot dogs.

For opening weekend, Steve's Hot Dogs will host a lineup of musical acts, including the Steve Ewing Duo, DJ Stan Da Man and Sarah Shewmake of the Dead Roses, which keeps with Ewing's goal of offering a regular music program at the restaurant.

The new location of Steve's Hot Dogs will be open Sunday through Thursday from 11 a.m. until 10 p.m. and Fridays and Saturdays from 11 a.m. until midnight. As for guests of the former location, Ewing hopes they will make the move with the restaurant just down the street, since he feels an enormous sense of gratitude to them for their support through the years.

"They've been our champions every step of the way — supporting us through the good times and bad."