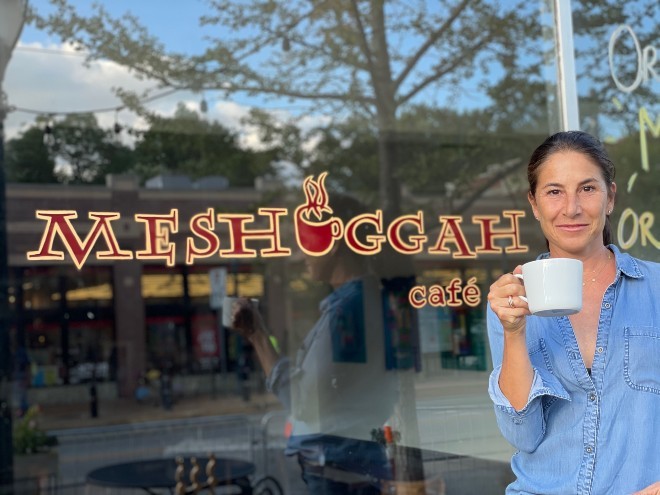 Seven years ago, Jen Kaslow bought Meshuggah Cafe (6269 Delmar Boulevard, University City; 314-726-5662) in the Loop from longtime owner Patrick Liberto for one reason: To make sure that the beloved coffee mainstay stay true to its bohemian roots and continue on as a community gathering place. Now, she's hoping to pass that torch to the next person as she seeks a new owner for the café.

"I feel like I took it one step further than where it was, and there is somebody else who has the energy to take it to its next place," says Kaslow. "My goal was never to have it forever, and I never intended to take it from a sleepy coffeeshop to a place with a line out the door. I can't say enough about what this place has given me and my family — more than I ever could have given it — but I am going to be an empty-nester, and it's just time."

For roughly 30 years, Meshuggah has been a staple of the Loop — a home away from home for the neighborhood's chess players, students, artists, musicians, poets and philosophers — that has served as a modern-day salon for the exchange of ideas. When Liberto, who ran the place from 1997 until 2015, told longtime regular Kaslow that he was looking for a buyer, her first thought — like every other regular who adores the place — was whether or not the next buyer would be able to keep it as it is or betray that ethos. The latter, was something she could not bear to see happen, so she decided, on the spot, to take matters into her own hands.

"I tend to be someone who wants to find solutions to things, so when he said he was selling, I thought that maybe I could be the solution," Kaslow says. "I told him, 'It can't go away. Who is going to buy it?' Then I turned to my friend and asked, 'What if I buy it?' When he didn't try to talk me out of it, and told me he thought it was in my wheelhouse, it seemed like it wasn't such a crazy idea."

Though Kaslow has always seen herself as a steward of Meshuggah, she made a few updates to the place when she took over that have been well-received. Based on feedback she received from a suggestion jar that she put up on Day One of owning the café, she added electrical outlets, updated kitchen equipment, put in a kitchen vent and added seating, which gave the place a tiny facelift while maintaining its essential character.

"I was super nervous about Patrick's legacy and the legacy of Meshuggah, because it has such a huge one and people have so many memories," Kaslow says. "Everybody identifies with it and feels so deeply that it is theirs, so I didn't want to be a disruptor. I wanted to keep it the same even though I needed to make some changes."

While she kept the coffee the same — the most common suggestion in her suggestion jar — she did tweak the menu, which resulted in sales going through the roof. After analyzing what was working and what wasn't, she streamlined the offerings and expanded breakfast dishes, which she felt was missing in the Loop.

Her instincts were right; since taking over in 2015, sales have doubled, even with the challenges of trolley construction and the pandemic making owning a business in the Loop difficult.

She's hoping that the next owner will be able to strike that same balance of growth and updates with respect for the past, which is why she plans on being very intentional about who buys the café. For her, Meshuggah's mission has always been community, and she wants the new owner to continue looking to that as the driver for decisions. Though she sees opportunities to do things she hasn't done, her goal is to put the café that means so much to people in the hands of someone who just gets it.

"I'm excited for somebody who wants this type of business to take over," Kaslow says. "It will be hard and sad, and I don't mind being here during the transition. I came into this not knowing a thing, so it doesn't need to be somebody in the restaurant business. If I could dream up a buyer, it would be someone who appreciates it for what it is. There are so many interesting people here and interesting stories. The colors in the Loop are just endless."

Kaslow encourages anyone interested in talking to her about buying Meshuggah to reach out to her at kaslowjen@gmail.com.