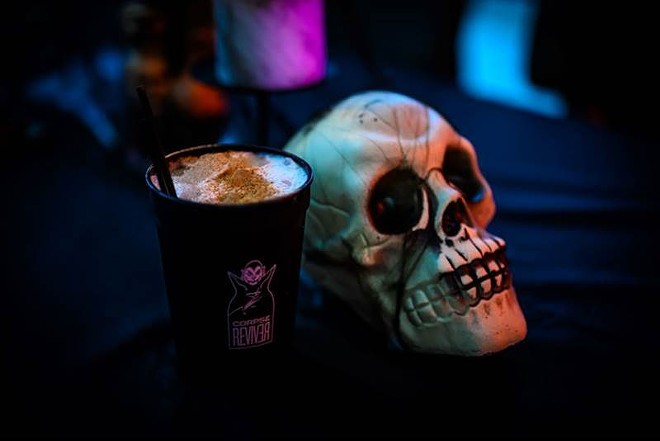 Corpse Reviver, the name of the returning pop-up Halloween bar, will open up on October 6 and run Tuesdays through Saturdays from 5 p.m. until midnight. Reservations are required, allotting up to six guests per party a one hour experience.

Lazy Tiger’s co-owner Tim Wiggins created Corpse Reviver in 2019. Since the event was unable to return in-person to the Central West End last year, it gave Wiggins extra time to perfect the cocktails being offered.

“We had an extra year to get super creative with the cocktails and make the experience even more entertaining,” Wiggins said in a press release. “I naturally put a lot of creative energy into Halloween. The response to Corpse Reviver has been wild, and we are thrilled to have it back after last year’s pandemic hiatus.”

Wiggins’ 30th birthday is also on Halloween, making it all the more reason for him to celebrate. The bar chose a haunted circus theme this year, complete with “crazy clown scare performers on certain days,” according to the press release.

For each cocktail sold, a dollar will be donated to the ACLU. Menu items include gin-based Corpse Reviver #666 and a “boozy fruit punch” called “Creep in the Box” that serves four to six people and comes in a Jack-in-the-Box. Another drink on the menu, called “Lust for the Juggler,” contains Kentucky bourbon, lemon, coconut mint and more. There are more drinks on the menu which can be found here. Popcorn will also be served to guests.

Not only will drinks be sold, Corpse Reviver merchandise will be available for purchase. T-shirts, temporary tattoos and glassware all designed by artist Dr. Slime are all up for grabs.

Reservations for the event are required and can be made on resy.com. If reservations fill up, a wait list will be available in the event of a cancellation. The pop-up bar will remain open until October 30.