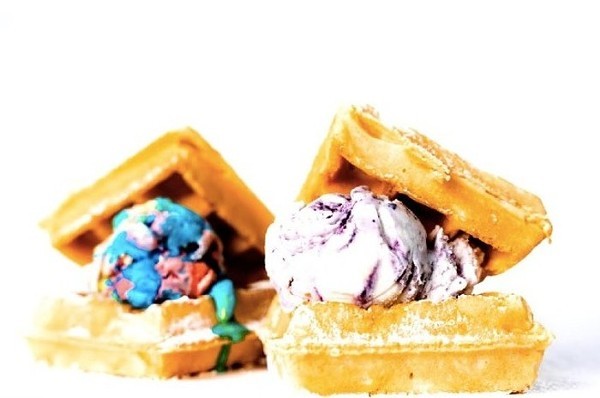 When Eric Moore first signed his lease for the space that would become the second location of Boardwalk Waffles & Ice Cream (multiple locations including 4348 Telegraph Road, Oakville; 314-939-1079) in 2019, he didn't anticipate it taking so long to open. Now, after two-plus years, a pandemic, equipment delays and a renegotiated lease and expansion before even serving his first customer, he's thrilled to finally welcome guests to a brand-new spot in the heart of South County.

The new Boardwalk Waffles & Ice Cream opened this past Saturday in Oakville, serving up the Jersey Shore-inspired treats guests have come to know and love from his original location in Maplewood. As Moore explains, he had anticipated that there would be a good amount of interest in his restaurant from people in the surrounding neighborhoods, but the magnitude of the initial response was pleasantly overwhelming.

"We opened on Saturday at noon, and there was a line 100-200 yards long that started that morning at 11 a.m. and didn't end until we closed [Tuesday] night," Moore says. "The numbers were through the roof. I never expected such a warm welcome from Oakville."

The reception he received for the second location was proof that Moore's plans for Boardwalk Waffles & Ice Cream are on the right track. Not long after opening the Maplewood store in 2017, he realized that this was a brand he could expand, and made moves to do so, beginning with relocating his original store to a larger spot. From there, he secured the South County spot, as well as one in Soulard, which is slated to open in five or so weeks, and another in Grand Center, which is still under construction.

As for the newly-opened Oakville location, Moore is offering the same menu as the Maplewood store, including Boardwalk's signature ice cream-filled waffle sandwiches, waffle sundaes called "Wachos," waffle cones, shakes and waffle bowls. Ice cream flavors, made by the Ice Cream Factory, rotate regularly; current options include chocolate chip cookie dough, black walnut, peanut butter blast and pumpkin spice. He has yet to launch brunch at the new spot, though that may come in the future. He also teases that, should business keep going the way it did this past weekend, he may add boozy beverages and live music in the future.

In the meantime, Moore is just thrilled to finally be open and serving a little bit of joy to the South County community, hoping that he can keep the momentum going and realize his vision for Boardwalk Waffles & Ice Cream as a national brand.

"My brother was telling me that if I could be successful in Oakville, it would be a test case to see if I could cross-brand to different neighborhoods," Moore says. "Next up is Soulard, then Grand Center, and after that I'm eyeing West County and Valley Park. If I can be successful in all of those different neighborhoods, then I feel I am much more closer to going nationwide."