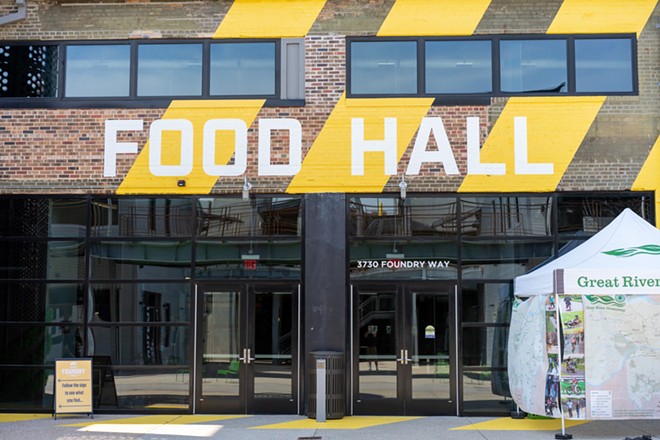 This month — five years after developer Steve Smith and the Lawrence Group announced their ambitious plans to transform a derelict part of Midtown into a thriving destination — City Foundry finally became a reality. The project's high-profile dining venue, the Food Hall at City Foundry, opened on August 11, welcoming a whopping 15,000 guests in its first five days of operation, with St. Louis diners signaling that it was well worth the wait.

The Foundry's Food Hall may have been the month's highest-profile opening, but it wasn't the only exciting thing to happen in the city's food scene. Basil India, a new concept from the owners of Turmeric in the Loop, opened its doors this month in Tower Grove South, as did Chatawa and Grand Pied, a bar and restaurant project from former Tick Tock Tavern co-owner Thomas Crone and Civil Life Brewing Company's former chef, Tony Collida. Chicken Out's second location in Kirkwood showed that the fried chicken sandwich craze is still going strong — about as strong as the crab boil trend, which found a new outlet in the form of Crab N Go in Overland. And, despite the many obituaries the have been written to the form over the past year-and-a-half, Timothy's in Creve Coeur made its bet that fine dining is not dead.

All was not sunny this month, however. Dottie's Flour Shop, the quaint pie and sweet treats shop in Ladue, closed its doors, as did Weber Grill in the Galleria. Perhaps the most difficult closure of the month was Nadine's Gin Joint, a beloved Soulard institution that, despite robust business, could not hold on due to the staffing crisis that has been plaguing the industry as it tries to navigate the chaos of the seemingly endless pandemic.