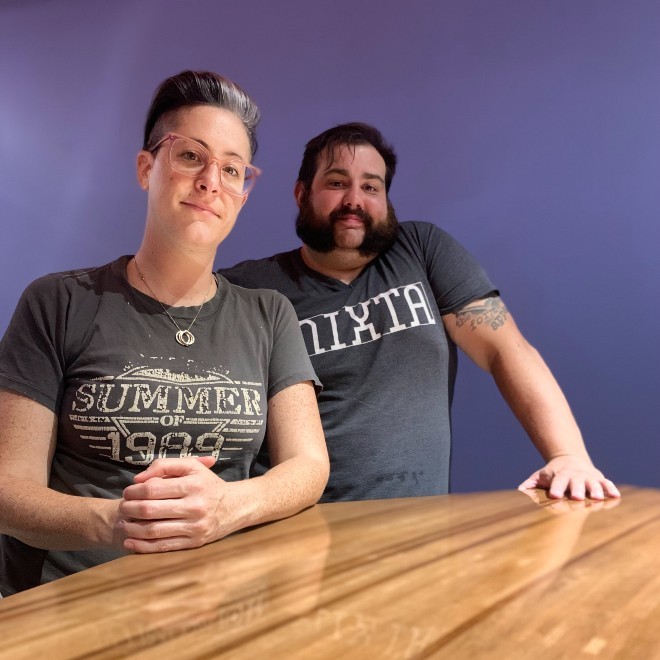 The Grove will get a new bar this fall, one that promises to be a great neighborhood spot with a small menu of well-made drinks, low-key food and an unpretentious vibe. This will not be just any bar, however. The forthcoming spot, Platypus (4501 Manchester Avenue), will be owned and operated by two of the city's most celebrated bartenders, Meredith Barry and Tony Saputo.

"We have both just dreamed of having our own space for a long time," Barry says. "Together, we have 40 years in this industry — he has twenty and I have twenty — so it seemed like the time to take that risk and jump with somebody that I trust and care about."

According to Saputo, the plans for Platypus have been officially in the works since January when he formed the business' LLC. However, the wheels had been in the works ever since he left his job with Consips, the group behind the Midwestern, Start Bar and Wheelhouse, last July. Following his departure, Saputo was doing some bar consulting and working odd jobs here and there while looking at spaces with a few of his friends in the real estate business. His plans solidified when he and Barry teamed up earlier this year and became even clearer when the pair found the former Urban Research Brewery ("the U.R.B.") in July.

Barry and Saputo both come to Platypus with impressive cocktail resumes. Barry, who traces her career in the industry back to her childhood, when she would help out her dad around the restaurants where he worked. Her career as a bartender began in earnest at Hamburger Mary's in Chicago, where she worked for five years until moving into the hotel food and beverage business. That path led her to St. Louis and the Angad Arts Hotel, where she served as beverage director for the former Grand Tavern by David Burke, until leaving to join Niche Food Group. There, Barry has led the beverage team and Taste and developed chef Gerard Craft's line of spirits, La Verita.

Saputo got his start in the business in dive bars around town before honing his cocktail skills at Eclipse. From there, he went on to develop his own menu, not far from Platypus, at Layla. There he earned a reputation as one of the top cocktail minds in town and was credited as one of the major drivers of the city's craft cocktail movement. He has also worked at Atomic Cowboy, the Benevolent King and Firecracker Pizza.

Though outside observers would rightly consider Barry and Saputo to be a dream team, they are much more humble about Platypus. They both describe the bar as unpretentious and having something for everyone; whether making a creative drink or a rum and coke, the pair plan to do their best to create drinks that make their guests happy.

They also see Platypus as a talent incubator and plan to mentor people who are new to the industry. As Saputo explains, his gigs over the past year put him in contact with people who were also working hourly jobs here and there, whether that was at a McDonald's in Sullivan or the deli counter at Schnucks. In them, he saw a passion and an interested for the beverage field, and wanted to give them a springboard to a career in the industry.

"I know it works if you find the right people with the right work ethic," Saputo says. "If you throw enough sweat at it, it will work."

Barry, who plans to stay on with Niche Food Group in some capacity, echoes Saputo's sentiment.

"I want to create people who are better than us," Barry says. "Instead of 'my way is best,' it's better to soak up as much information as you can, because the more knowledge you have, the better you can take care of the guest. We want to create that sort of hospitality environment."

As for the space, Barry and Saputo note that Platypus will have a front room with a bar, a second room with a few arcade games like Ms. Pac-Man, a third room with a small stage for live music or DJs and a patio. The bar has a full kitchen, and though they are still working out the food component, Barry and Saputo hope to serve as an incubator for people who do not yet have a brick and mortar.

Barry and Saputo are aiming for a Fall opening, ideally in late September, though they admit it might be more like October. In the meantime, they are hosting an event this Saturday in the parking lot of the Monocle as a way of introducing themselves to the neighborhood.

"It should be a lot of fun with both of us bartending," Barry says. "We want everyone to come by, say hey, and help support us for this next venture."