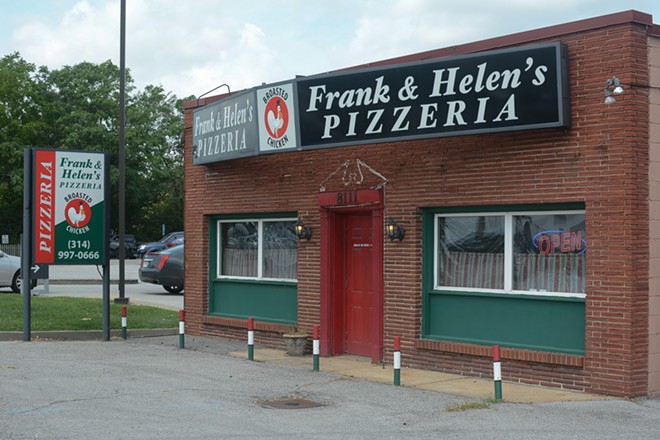 
When Rebecca Horvath wants to get across just how seriously she takes her role as a steward of the Frank & Helen's Pizzeria legacy, she brings up the light fixtures. The jewel-toned, vintage Tiffany-style chandeliers have been casting a warm glow over the restaurant's dining room for decades — through generations of diners, three ownership changes and the necessary updates to the old cinderblock building. On Horvath's watch, that will never change.

"We've done updates, but this still looks like a 1970s pizzeria, and we want to keep it that way," Horvath says. "The lights are extra special. Even if we remodeled the entire place, we'd still keep the lights. I have my staff ask me what we'd do if there was a fire, and I tell them that everyone needs to grab a light and run."

Whether or not those chandeliers have been hanging at Frank & Helen's since its beginnings in 1956 is one of those details lost to history. What is known is that the restaurant wasn't started by Frank or Helen. Founded as Jule's Pizza Place at the corner of Olive and Midland boulevards by Julius Seitz 65 years ago, the restaurant would undergo its name change when Julius sold the place to his brother, Frank, in 1959. Frank changed the name to Frank's Pizza, but that would be short-lived; about a year later, he brought on his sister, Helen, as a partner, sealing the deal on the moniker for posterity.

Though there were several restaurants along that stretch of Olive Boulevard that catered to the area's families and high school students, Frank & Helen's became a favorite and quickly grew out of its space. Though the brother and sister bought the adjacent storefront to expand their dining room, it still wasn't enough room, and they decided to look for larger digs. They never dreamed that would come in the form of a car wash, but when Frank happened upon the barebones building, he knew he'd found their spot. In no time, they blocked off the front and back car entrances, moved in the equipment and set up shop to open in 1967 for their first guests to the restaurant's current home at 8111 Olive Boulevard.

Frank and Helen owned the restaurant for 35 years, gaining a following for their pizza, steaks, broasted chicken and house creamy garlic dressing — which is such a closely held secret that, for most of his tenure, Frank insisted he be the only one to make it so as not to give away his recipe. He and Helen knew their guests by name, manning the front door and welcoming them in, oftentimes to the prearranged tables they'd denote with a black plastic "Reserved" placard. Their presence was a constant, so it was reassuring to longtime regulars that, when they were ready to retire, they sold the restaurant to one of their waitresses. She eventually sold it to a University City police officer and his wife, who ran the place for about ten years before Horvath and her husband, Patrick, took over in 2008.

For the Horvaths, owning Frank & Helen's is the realization of a dream that began under the prior owners in 2002. As Horvath explains, Patrick was best friends with the University City police officer who owned the restaurant and served as his manager when he needed extra help. There was always the expectation that he would eventually sell it to Patrick, and though there was a point when the Horvaths didn't know if that would come true, he eventually handed over the reins, placing it into the hands of two people who he knew would take good care of such an institution.

"We try to stay true to our roots," Horvath says. "We make our pizza the old-fashioned way and haven't changed our recipes. We still make the crust, sauce, grind the cheese each day and make our own sausage from the original recipe. Even one of the ovens we have is still the original. We call it 'Frank' and the other one is 'Helen 2.0.' We had both originals until the original Helen gave out on us, but Frank is still original, and he's the one we use when we have to cook a pizza on the fly because he's the fastest."

As firmly as they want to adhere to the old way of doing things, the Horvaths have made some changes that they feel make the restaurant better. Horvath admits it's a balance, but she stands by their decision to get rid of the canned corn and green beans and frozen appetizers, even as those less-than-ideal originals were hard for some regulars to let go. Despite those cries for the canned corn, though, they have earned the trust of the longtime guests who are happy that they can still bite into that ridiculously juicy broasted chicken — maybe dipped in some creamy garlic dressing — and share their joy with their children, and children's children.

"Not a day goes by that we don't have at least two people come in and tell us that they have been coming here for 40, 50 or 60 years," Horvath says. "They tell us this is where their grandparents had their first date, and it's cool to be a part of those family traditions. It definitely puts an added pressure on us that if we go under, we are taking someone's family memories with us. We don't want to fail, so it makes us heighten our game, because we know this is something that is supposed to be in St. Louis."