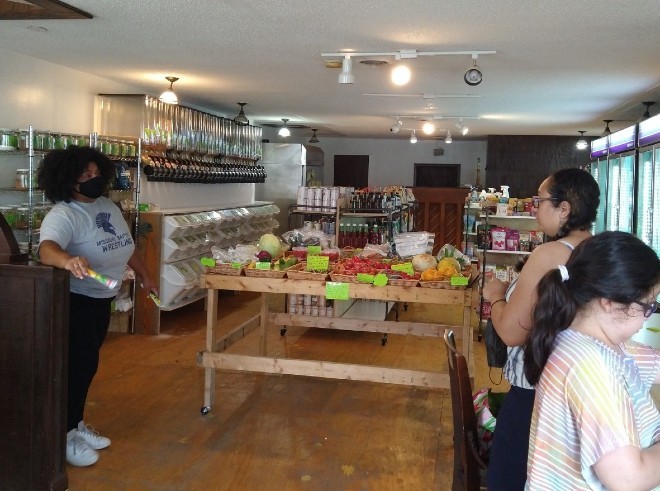 St. Louis' Carondelet neighborhood will soon be home to a brick-and-mortar, community-owned grocery store. The new project, MARSH Grocery Cooperative (6917 South Broadway), will celebrate its grand opening this Saturday with the vision of addressing the intersection of food justice and social justice.

Described as a way to bridge the gap "between ecologically sound, nutrient-dense foods and affordability," MARSH Grocery Cooperative will operate on a sliding-scale model whereby shoppers pay what they can afford. According to Beth Neff, one of the worker-owners and MARSH's founder, the store will increase accessibility of nutritious and environmentally friendly food, both geographically and financially.

"Food insecurity is a big issue, but there are so many other issues that prevent people from eating nutrient-dense food or from having a plot of land to farm," Neff says. "People choose the food they choose because of extremely complex, interrelated issues. Here, we are trying to see what happens when we build our own grassroots food system from bare bones. We want to envision and try to build it rather than going off of default models of how things are done."

As Neff explains, the idea for MARSH (which stands for Materializing and Activating Radical Social Habitus) originated with her and her daughter, who were looking for a way to connect Neff's background in food-based social practices with her daughter's interest in cultural arts. Their ideas coalesced once they found a building in Carondelet that — though in need of serious rehabilitation — seemed like the perfect place to establish their multi-faceted cooperative that would consist of a diner, grocery store and online shop. However, after taking over the building in 2019, they encountered serious setbacks, including the pandemic and a massive basement flood that destroyed expensive heating and water systems. That forced them to reassess what they were able to offer initially.

"We had to switch gears that first year and start with the grocery cooperative, because that was the piece that made the most sense," Neff explains. "We developed an online catalogue, connected with suppliers and opened the cooperative about two weeks before the COVID shutdown, which really honed our focus."

In addition to running the online food co-op during the pandemic, MARSH partnered with local food pantries and St. Louis Mutual Aid to provide groceries and prepared foods to those in the area who were struggling to find and buy food. Through their work, they made connections with other organizations in town and learned a lot about how several different issues like employment, housing and food insecurity were affecting people in the community. Based on what they observed, they wrote a grant to the USDA's Healthy Food Funding Initiative and were awarded funds that would allow them to launch their brick-and-mortar operation to address these issues.

As Neff explains, the MARSH Grocery Cooperative will function like a traditional grocery store in the sense that anyone can come in and shop for a variety of products, including produce grown on the property's vegetable garden, meat and prepared foods. Instead of prices, shelves will be labeled with how much each item costs the cooperative to provide; when shoppers head to the checkout, they will be given the option to pay what they can, whether that means more or less than the labeled amount.

"The point of the sliding scale is that if you are only looking at things like quality and less environmental impact, say with grass-fed beef for instance, it may be better quality, have less fat and have less impact, but those things don't mean anything to you if you only have a certain amount of money in your pocket or on your EBT card," Neff says. "Our hope is that getting quality food will help improve your family's well-being, and you can decide for yourself how much that is worth to you and what you can afford."

Though you do not have to be a member of the MARSH co-op to shop at the store, Neff hopes that people will join and they're offering several ways to do so, including purchasing a one-time $100 membership, donating time and becoming an automatic member after shopping at the store ten times. As she explains, members are what make up the cooperative and get to vote on board members as well as help craft the organization's mission.

MARSH's grand-opening festivities on Saturday promise to set an exciting tone for the project. The Fattened Caf will be on hand with its Filipino barbecue, Heavenly Sinful Delights and Yellow Moon will offer sweet and savory goods, and there will be live music, activities for children and prizes. The event runs from 9 a.m. until 6 p.m.

"We're just so excited about this being a place of mutual benefit for workers, producers and consumers," Neff says. "We're ready to tell everybody that we're here."