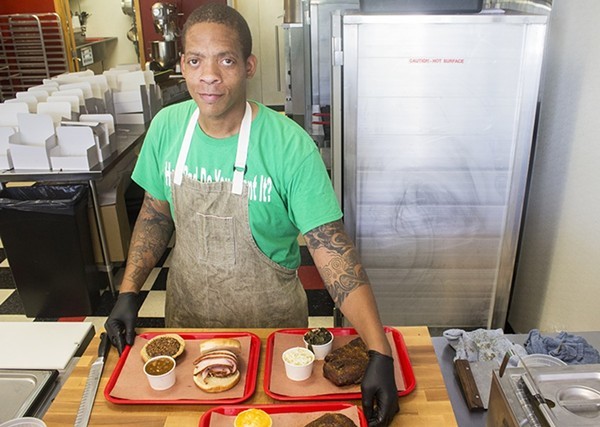 The air around Maryland Heights will again be filled with the smell of sweet smoke thanks to Ben Welch. The acclaimed chef and pitmaster has joined Six Mile Bridge (11841 Dorsett Road, Maryland Heights; 314-942-2211) as executive chef, bringing his barbecue, southern food and more to the brewery's tap room.

Six Mile Bridge owners Ryan and Lindsay Sherring announced the news in a press release earlier this week, noting a longstanding relationship with Welch since his days at his former smokehouse, Big Baby Q, which was open from 2016-2018. Because the smokehouse was located just minutes away from Six Mile Bridge, the Sherrings got to know Welch and, like many in the St. Louis area, developed an appreciation for his barbecue prowess. When the opportunity arose for him to bring that smoked meat magic to Six Mile Bridge, they jumped at it.

"We first met Ben when he opened Big Baby Q just up the road from SMB [Six Mile Bridge] and couldn't get enough of his food," Ryan Sherring says in a press release announcing Welch's new gig. "He is an incredibly talented chef, and [we] could not be more proud to have him on the team. This is just the start of exciting projects to come."

Welch's new role with Six Mile Bridge will be the first regular chance his many fans have had to experience his food since his departure from the Midwestern Meat + Drink last year. There, Welch built upon his success at Big Baby Q with a menu of both barbecue menu and southern-inflected fare, and he even went on to start a spice brand, Big Baby Spice Co., which launched in late 2019.

Though Welch is known for his barbecue, the menu he's created (in conjunction with Six Mile Bridge's Stephen Kovac) is less smoked meats-heavy and more elevated bar food. His famous corned beef will be featured prominently on a new corned beef Reuben; other dishes include a Nashville chicken sandwich a double smash cheeseburger, beer-battered cod and flash-fried Brussels sprouts. You can view the new menu in its entirety on Six Mile Bridge's Facebook page.