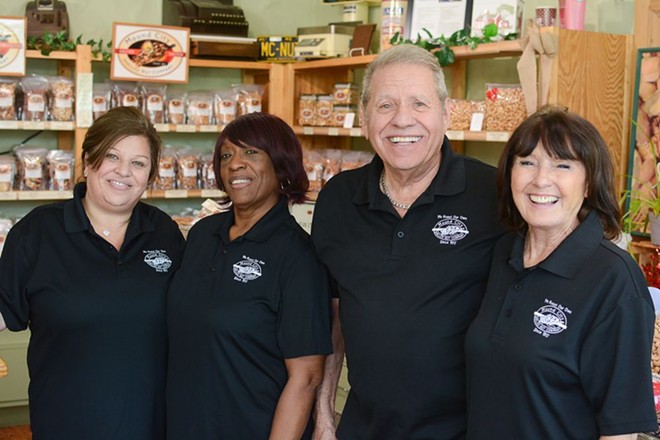 Byron Smyrniotis will never forget the sight he saw when he first peeked through the windows of Mound City Shelled Nut Company’s (7831 Olive Boulevard, University City; 314-725-9040) then-storefront on Delmar Boulevard. It was 1973, and he was casually checking out the business after hearing from the former owner’s nephew that it was for sale. What he saw didn’t do much to convince him to take the leap.

“It was empty except for a one hundred pound bag of peanuts,” Smyrniotis recalls. “That’s all that was left in the entire store.”

Still, Smyrniotis felt like he was the person to turn the business around. Armed with an entrepreneurial spirit and a penchant for tackling challenges, he decided to go all-in.

“I had no experience and didn’t know anything about anything, but I took out a second mortgage on my house and bought the business,” he says.

At the time, Smyrniotis was not the obvious choice to take over Mound City, the storied nut company that had been in business since 1917. An engineer by trade, he had a good job with Emerson Electric, working for their electric and space division. Though he had every intention of continuing in that role, he was looking for an investment opportunity and was curious whether that might be Mound City after learning that the founder, Ben Kessel, had passed away. Kessel’s widow was looking to sell the business, and Smyrniotis figured he’d fix it up, sell it and move on to his next investment. It didn’t go quite that smoothly.

“I was a little frustrated for a minute,” Smyrniotis says. “There was no one there to help me, and [Kessel’s] wife didn’t know anything about the business. I found some records, called some of the people he was buying from and started placing orders within about four or five days. They were supposed to start coming in the third week of November, but there was a national truck strike that delayed everything. We didn’t get our first shipment — pecans — until December. I packaged them up and our entire retail store was pecans. People came in and asked if I was going out of business. I told them no; we’re going into business.”

As Smyrniotis got his feet underneath him, he realized that owning and operating Mound City was going to be more than a side hustle. He asked for time off from Emerson Electric to focus on his business, but eventually had to leave that job behind. Aided by some of Mound City’s former employees who had come back to work for him, he was able to grow the business and start franchising it. The first one was off Ballas Road, followed by locations in the Central West End and Columbia, Missouri, and they enjoyed a good amount of success. However, Smyrniotis did not like the franchise arrangement because he didn’t have as much control over the processes and brand as he wanted. He eventually terminated those agreements and focused on opening his own company stores and seasonal locations, which had a roughly fifteen-year run.

During that time, Mound City developed a reputation as much for its chocolate-covered nuts as its plain shelled ones. Smyrniotis credits his grandfather with this development. A Greek immigrant who came to the United States with a friend who was a chocolatier, the elder Smyrniotis had restaurants and a candy shop on South Grand called Busy Bee for years. When Smyrniotis bought Mound City, his grandfather told him that he had to also have chocolates, and began making them for the business. His grandfather’s technique, coupled with ultra-fresh nuts, dazzled his customers.

“The advantage we have is that we process all the nuts we cover, whereas most of the chocolate guys buy theirs in cans,” Smyrniotis says. “We roast and chocolate-cover and always use pure chocolate, while others use thinners and chemicals in theirs.”

However, Smyrniotis insists that you don’t need to cover his products in chocolate to enjoy them. As he explains, Mound City’s nuts are superior because he buys them directly from the growers, not from a distributor. This prevents the nuts from sitting in a vacuum-sealed can in a warehouse for months, thereby resulting in a fresher product. He also believes in the importance of roasting the nuts to the point where they’ll achieve their peak flavor. While other nut companies, including the large brands, roast to the minimum level to do this quicker and ultimately cheaper, he insists on taking his time. 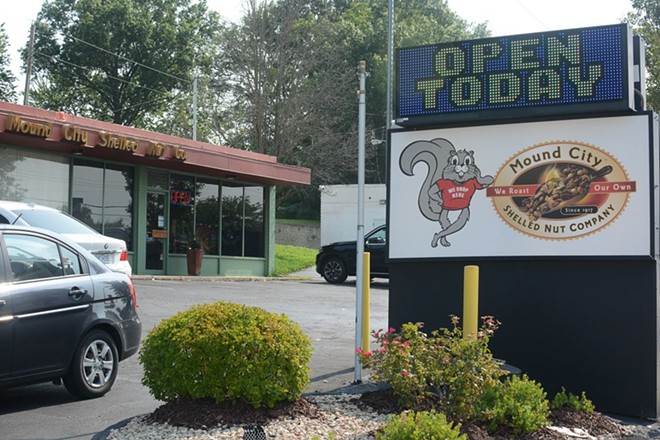 “It takes longer to really roast them the way they should be,” Smyrniotis says. “If you taste them roasted properly, the flavor is so much better and different than what you buy out of a can. There’s just no comparison.”

Though he’s been at it for nearly 40 years — and never intended to have that long of a run — Smyrniotis has no plans to change anything at Mound City for the foreseeable future. He jokes that he spent years intending to sell it, but there was always one more thing he felt he needed to do before making that move. Eventually, he got to the point where he realized he wasn’t going anywhere else, and once he got there, he knew there was nowhere else he should be.

“I realized that the great thing about a small business is you can make changes with the snap of a finger, and I really liked that,” Smyrniotis says. “When I was in corporate America, it took an act of Congress to make change, but here, if I want to do something, I do it. I’m very spontaneous, so I like that. Still, we haven’t made drastic changes — just a bit of fine-tuning here and there. We’re still doing our thing day by day by day.”