The Food Hall at City Foundry to Open on August 11 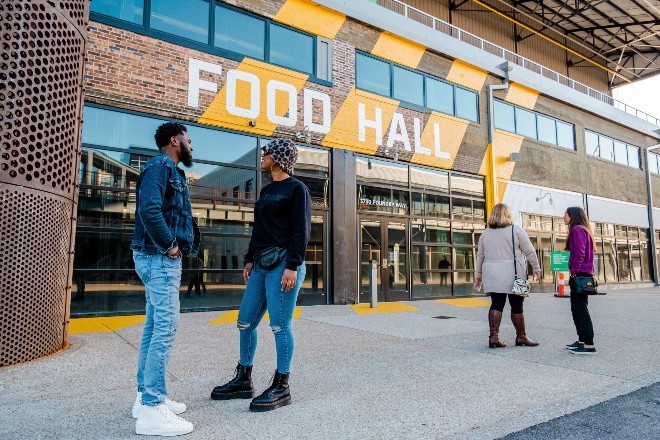 After years of anticipation, the Food Hall at City Foundry (3730 Foundry Way) has finally announced an opening date. The long-awaited space plans to serve its first guests on August 11.

City Foundry announced the opening of its Food Hall in a release this morning, giving a firm date to eager diners waiting to experience the culinary spectacle. The food component, which is part of the larger, 300,000-square-foot mixed-use development, will feature an initial roster of eleven restaurants, including Kalbi Taco Shack, Hello Poke, Good Day and Press Waffle Co. The hall will also have a central bar, the Kitchen Bar, which will be operated by Niche Food Group.

The City Foundry project, which was first announced in 2016, has been a long time coming for a city eager to host such a concept. Developed by Steve Smith and his ownership group FoPa Partners, LLC and the Lawrence Group, the project has seen several delays and, at one point, was plagued by rising costs and communications breakdowns with some of the eateries who'd signed on to be involved. That the COVID-19 pandemic ground much economic activity to a halt last year only added to the issues facing the ambitious project.

However, the Food Hall recaptured some of its initial buzz after finding its footing lat year, thanks to the leadership of James Beard award-winning chef Gerard Craft. Craft, who assumed the role of culinary director last year, took on the job of not only curating the participating restaurants, but also creating a celebratory atmosphere that he believes "defines the current culture and uniqueness of our city."

Though no opening hours have yet to be announced, the Food Hall will serve breakfast, lunch and dinner. Eventually, it hopes to feature twenty food concepts, as well as Alamo Drafthouse Cinema, and Fresh Thyme Market. The release notes that these additions will be rolled out throughout September and October.

“The Food Hall at City Foundry is the first of its kind in St. Louis," says Will Smith, asset manager for City Foundry, in the release. "By the end of this year, we’ll have introduced several new eateries to St. Louis while providing a space for guests to taste what makes this city great: diverse culture and hard-working and talented people. Visitors will not only be able to taste unique culinary dishes, but also experience art with all five senses at City Foundry.”