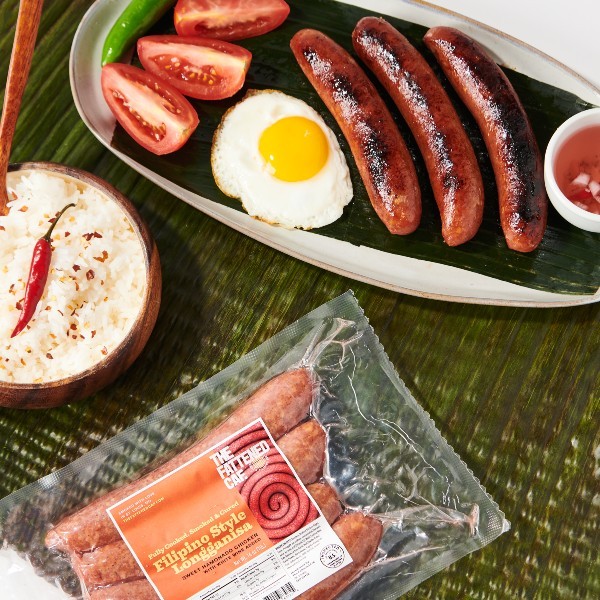 Last March, Darren Young and Charlene Lopez Young were riding high on the wave of success following their first-ever Filipino brunch. For three years, the husband and wife team had been doing pop-up Filipino barbecue events around town under the name Fattened Caf, but even the enthusiastic response they'd received to those paled in comparison to this 300-person affair. Thrilled with the reception, the Youngs left the event exhausted but excited for what they saw as their path forward - bringing Filipino brunch to St. Louis.

Two weeks later, the COVID-19 ground the food and beverage industry to a halt and put the Youngs' dream of perfecting their Filipino brunch events on indefinite hold. However, they didn't let that stop them. Instead, the pair have reimagined Fattened Caf beyond pop-ups, expanding their brand to include a line of Filipino sausages that is now available in 67 Schnucks markets — and the Youngs are not stopping there.

"We want Filipino food available in mainstream grocery stores," says Charlene. "For a while, our food stayed in International enclaves at international stores, but now, St. Louis has a local Filipino brand in a mainstream grocery store. I don't know if other cities like L.A. have that. We shop in mainstream stores. Why shouldn't our food be on the shelves next to Thai and Indian and Chinese foods? We're excited for how this can grow and hope that Filipino food becomes a household name for Americans — because it's good!"

The Youngs' path to Fattened Caf began roughly four years ago. After moving to St. Louis from Los Angeles, Charlene was struck by how few fellow Filipinos she encountered in her new hometown. Growing up in California, she was always surrounded by a large Filipino community, but in St. Louis, she felt alone.

Around that time, Darren was also noticing something about his new city, albeit a much lighter observation. A California native, his experience with barbecue prior to moving to St. Louis consisted of Chili's baby back ribs; the moment he had his first taste of Pappy's Smokehouse, he was overwhelmed by what he'd been missing and set out to discover all that he could about grilled and smoked meats.

Eventually, Darren grew tired of spending the money to go out to eat all the time and started experimenting with barbecue himself. His passion for it was matched by the amount of meat in his refrigerator, and eventually, he and Charlene realized that they had to figure out a way to share their food with others. They began hosting game nights for friends, who were so enamored with Darren's barbecue that they began encouraging the pair to figure out a way to share it with a wider audience.

That's when it hit Charlene: Barbecue is a huge part of Filipino food culture. Why not begin doing Filipino barbecue as a way to introduce her culture to her friends in St. Louis? From that moment forward, the Youngs turned their game nights into full-blown Filipino feasts, garnering high praise from anyone who attended. News spread through their social circle of their outstanding food, and before they knew it, they were catering for friends, then friends of friends until they realized they were on to something big.

"We were on our way back from the Philippines and started talking about doing pop-ups or a food trailer and came up with the idea of the Fattened Caf," Charlene explains. "There's this scripture in the Bible about the prodigal son, and when he returns, his fathers says he will slaughter the fattest calf and invite everyone to celebrate. That's what we wanted to do — to cook a feast because we want everyone to come together and enjoy each other's cultures and create a culture around Filipino food in St. Louis where there really wasn't one."

The Youngs launched the Fattened Caf in 2017 at a pop-up at Milque Toast and have grown their brand over the past four years through other events around town, farmers markets and a residency at Earthbound Beer that began in 2019. Though they assumed they were working toward an eventual brick and mortar restaurant, the opportunity with Schnucks — part of the store's effort to help local minority-owned businesses during the pandemic — has changed the way they see their brand moving forward. That, together with a recent $50,000 grant from the University of Missouri St. Louis Diversity Equity and Inclusion Accelerator, has helped the, recast Fattened Caf as a consumer products company as much as a pop-up restaurant, and they hope to keep moving in that direction.

In addition to the Schnucks arrangement and the UMSL grant, the pair credit fellow Filipino trailblazers in the St. Louis food community for helping to pave the way for Fattened Caf. The Youngs point to such places like Guerrilla Street Food and St. Louis Filipino Bread, as well as Malou Perez-Nievera and her pop-up kamayan feasts for putting Filipino food in the conversation — something Charlene and Darren are both thrilled to be a part of.

"We can't ever say that we got here on our own, because as much work as we did, the folks in the industry and the community embraced us and pushed us to do what we wanted to do," Charlene says. "Everything has been a great collaborative effort. It's taken a village, and this is such a community effort. We wouldn't be here if it wasn't for the St. Louis community embracing us and giving us a seat at the table."