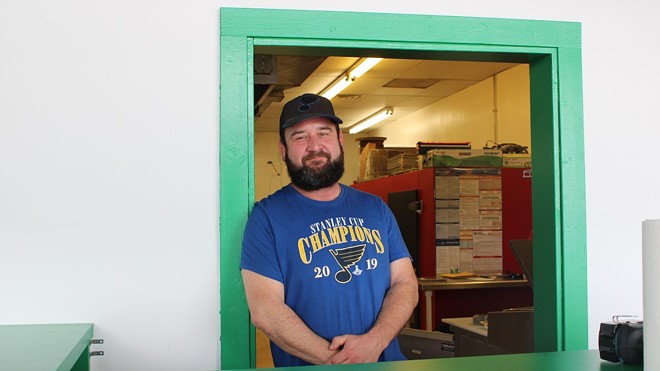 Fast asleep one March night, Jason Guliano dreamed he was looking around Fuego’s Pizza with its co-owner Chris Barker. As he hung out with Barker, he realized there wasn't much food in the store. He told Barker he needed to make some more pizzas. But, Barker looked at him and said the restaurant was actually closing down.

And then, Guliano’s alarm went off.

But, that’s not where the story ended. Guliano checked his phone's messages early the next morning, and there was one from his long-time friend Barker. The weird dream suddenly turned into reality — Barker was offering Fuego's space to Guliano.

“I was like, ‘Uh-oh,’” Guliano laughs. “I literally woke up and I was like ‘Oh my god, this just happened, it’s so weird.’ And you can’t not jump on that if you have something weird like that happen.”

After that fateful dream and subsequent text message from Barker, Guliano got to work and opened That’sa Nice'a Pizza (11726 Baptist Church Road, Concord, 314-722-3121) on July 6 in the old Fuego’s space.

The pizza joint, which has operated out of its Arnold location (299 Richardson Road, Suite 2, Arnold, 636-296-0950) when the Concord location closed in 2008, is now back in its original community. Concord was home to the original for 34 years, Guliano explained, so going back to where it all started will be a homecoming that’s packed with people that have been waiting for their pizza fix for some twelve years. The Arnold location will remain open, as well.

He said the feedback from the community has been crazy. What initially started as him telling five people about the additional location spread throughout the community. He said that announcement on Facebook had more than 500 likes and nearly 300 comments, something he doesn’t regularly see on his posts as a small business. 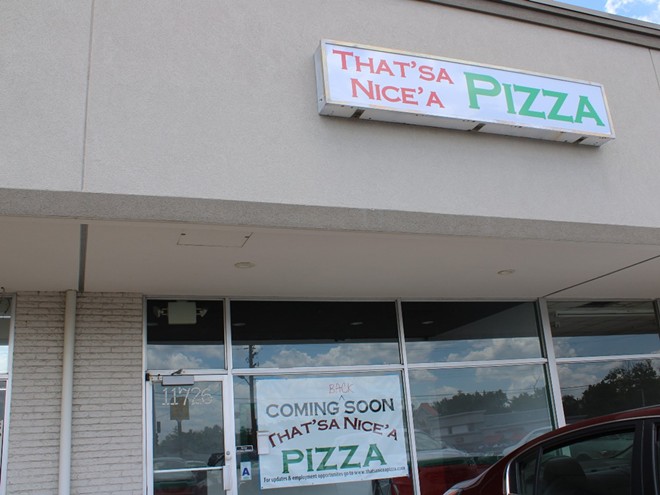 For Guliano, the 'za joint was his first job and one he kept coming back to over the years because of the community built around it.

“No other business I've ever worked for had the customers just been like in love and expressed it. It's not for everybody, don’t get me wrong. You may try it and be like, ‘Eh, it's OK,’ or you may try it and be amazed by it,” Guliano says. “With this place, it's just constant — it’s all over social media. When people come in, they’re constantly reinforcing, ‘It's so good! I can’t believe it.’ Especially when they found out we’re still open in Arnold and people haven't had this in ten years, they’re just ecstatic.”

The menu at the new-old location will be the same as it always has been — pizza, toasted ravs, wings, salads, pasta. You name it, it’s there. There’s not much setting the two locations apart, Guliano says, except maybe the interior. Concord will be decorated with a sports wall, whereas the Arnold restaurant has the classic green and red paint on the walls alongside a menu. Guliano has removed the dine-in areas for both restaurants. COVID-19 revealed the problem with having people too close together and stretching an already-thin staff further.

The main challenge — besides opening, itself — has been staffing, Guliano says. Like every other business in a COVID-19 world, the amount of people applying has been at a low. He has about fourteen employees at his Arnold location, with about five at the Concord location. He worries about keeping his customers happy as he expects a pretty steady, if not busy, opening week. His orders at the Arnold location have doubled as COVID-19 increased his pick-up-and-delivery-only business, with weekend wait times reaching 45 minutes to an hour for a pick-up order.

Guliano is doing little advertising to ease his opening week — he’s trying not to overload his employees. He’s only putting out Facebook posts and information on his website.

“When I post and tell people we’re going to be open, I’m going to put a big disclaimer like ‘Look, we don’t have a lot of people but we gotta open, we’re paying rent,’” Guliano says. “I just want to ask people to please be patient, When we first open, it’s going to be busy.”

He’s working to manage an opening weekend like he had when he opened the Arnold location fifteen years ago. When Arnold opened, Guliano said he was sliding around the back of his pizza shop on his knees, trying to get pizzas out of the oven and orders out the door. He had new employees that he was still trying to train and the orders were pouring in.

Guliano just wants to make sure those who order a pizza the first few weeks walk away feeling satisfied. He says he had an old employee whose family ordered during the Arnold location's opening and hated the pizza because the new restaurant was still working out kinks.

“When he first ordered our pizza, [his family] called it ‘That’sa Not’a Pizza’ because it was bad,” Guliano explains. “I don't know what was wrong with it, but at some point they decided to give it another shot and just fell in love with it. And now it's every week, if they’re in town, they’re ordering.”

At Concord, the employees opening the shop with him are more experienced, so he believes they can handle a good amount of business. He’s not complaining about the rush of customers he expects — he’s happy to serve a community that loves the pizza he makes. Guliano says over half of his business comes from regular customers ordering once or twice a week, maybe monthly. Comments flood his new Facebook page for Concord, asking when he’s planning on opening, or just a simple “We’re eagerly waiting for your return!”

Guliano turned over the “Open” sign on July 6. He described the movement as something that will spread like Charlotte’s Web, all over the neighborhood and internet.

“I’m not going to complain,” Guliano said. “Something that’s been open for over 47 years, it’s got to be good. You don’t last if it’s not good. I’m definitely feeling blessed, grateful, you know. We care. It’s not just ‘Here, get your pizza, give me your ten bucks and get out of here, I don’t care what you think about it.' I like hearing people.”