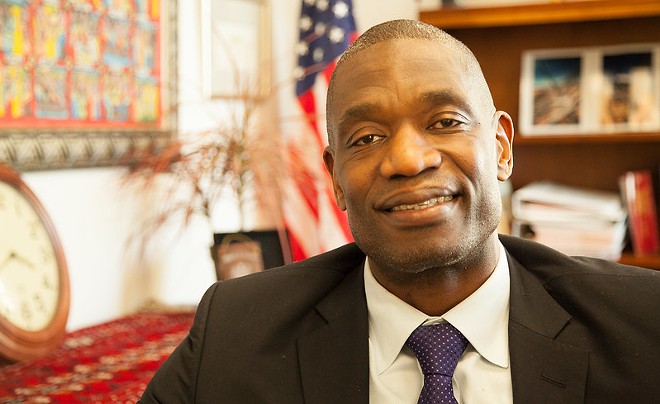 NBA Hall of Famer Dikembe Mutombo, famous for "no, no, no," is saying yes to St. Louis.

The ex-ballplayer-turned-humanitarian entrepreneur is partnering with the Northwest Coffee Roasting Company (4251 Laclede Ave., 314-371-4600) to roast and sell his new line of coffee, making the Central West End coffee shop and roaster its first cafe partner.

As part of the launch, Mutombo is scheduled to visit the coffee shop on Monday for a free 90-minute meet and greet. Starting at 10:30 a.m., he and Northwest's owner, Jason Wilson, will talk about coffee and the industry in Africa, including the hardships and opportunities for Africans all along the supply chain.

Wilson says mutual acquaintances introduced him to the former All-Star and suggested they work together.

"Usually, when that stuff happens, it doesn't come to fruition," Wilson says in a phone interview. "Usually, it's just talk."

But this was more than talk, and Wilson says he soon learned Mutombo was serious about coffee along with a humanitarian mission to provide opportunities for people in his native Democratic Republic of Congo. As player, Mutombo was a swaggering presence, an agile seven-footer who was so well known for wagging a taunting finger at opposing players after blocking shots that Geico turned it into a commercial where the former center swats away trashcan jump shots, grocery-store-aisle lobs and laundromat layups while cackling, "Not in my house!"

But Mutombo has also been a dogged advocate for those still struggling in his homeland. That dedication has continued in Mutombo Coffee, which began last year as part of an effort to rebuild supply lines during the pandemic. In particular, Mutombo has sought to work with female coffee growers, who are often short-changed when it comes to making money in the industry.

Wilson has similarly made social and racial equity core principles of his operation. As one of the few Black coffee roasters in the United States, he's worked to bust stereotypes about what paths Black people should follow to success, while also volunteering in the community, including a spot on the Clayton Board of Education.

Wilson says he and Mutombo connected through the overlapping motivations for business and social good.

"His mission aligned with mine, and here were are working together," he says.

Northwest will roast, sell in-house and distribute through online orders at least two lines of Mutombo Coffee. Wilson says they'll be a medium-roast blend. Beans are sourced from the DRC and other African nations.

And while Wilson's and Mutombo's partnership hinges on coffee, Wilson the basketball fan also enjoys connecting with one of the game's legends.

"I was definitely a Dikembe Mutombo fan," Wilson says. "At Georgetown and Atlanta, that was my guy."