Big Plans from New Ownership at TNT Wieners on Delmar Inside TNT Wieners, a sign for ice cream looks about 60 years old. Two adult-sized foam hot dog costumes hang on coat hooks in a corner. And a third hot dog costume adorns a mannequin with a mask properly fitted over her nose and mouth. She stands watching the door.

Co-owner Jamal Lewis is also watching the door, glancing over my shoulder as we talk about his plans for the new hot dog shop. “We gotta get people in this space,” he says. He laments that people stop and look at the energetic facade, displaying dozens of hot dogs, and then keep walking down the Delmar Loop, often crowded with foot traffic.

Along with hot dogs, TNT also serves Illinois-based Excel sodas from a fountain, cans of beer and ice cream. Vegan and gluten-free options are available, as advertised on a sidewalk sign in front of the store. There are plans to incorporate marijuana derivatives as well. 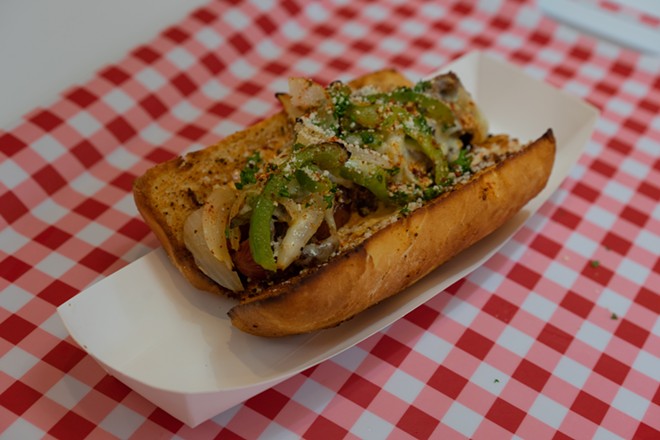 Lewis and his business partner, Amber Rodgers, bought the shop (formerly Wacked Out Wiener) off of Facebook Marketplace. “The owner, Tina, had another business that she was running. She did a great job of bringing it up to where it is now, and I feel like we’re capable of taking it to the next level,” Lewis says.

Lewis started in the restaurant industry at the age of fifteen, manning the grill at Steak 'n Shake. After climbing the ranks to operations supervisor, he struck out with a partner to start a restaurant called Fried in Downtown West. “Fried was a weed-themed restaurant.” Seeking a late-night, munchies-fueled clientele, Fried served comfort food with marijuana-inspired names — five chicken nuggets for $5 was a “nickel bag,” a dozen for $10, a “dime bag.” There were options to get your meal “rolled” in a burrito, or to “pack a bowl” with mac and cheese.

“Unfortunately, partnerships didn’t work out,” Lewis says. Fried closed down. “Maybe a year ago, I told [Rodgers] I would never do a restaurant again.” But then the TNT listing on Facebook came along, and things fell into place. Now, they have grand plans, which will begin rolling out in July. A launch event is scheduled for July 3. Continuing the legacy of Fried, they plan to infuse Delta-8 and CBD into their hot dogs, both derivatives of marijuana. Lewis explains that they are legal for consumption by those eighteen years and older. “I’m trying to bring the comfort back to comfort food,” Lewis says.

Other features at the event will be a DJ and a doctor. The doctor, a friend of Lewis, will be set up to help people get their medical marijuana cards. These steps are all aimed towards drawing people into the restaurant. Lewis and Rodgers are determined to make hot dogs relevant outside of ballparks and backyards.

“Next month is hot dog month. We’re gonna do a new hot dog every week,” he says. With the help of Carl Lipsey, former chef at the Moonrise Hotel, Lewis and Rodgers are poised to reinvent the menu. “I wanna really filet it up, attract a different type of crowd that’s like ‘Oh my ...’ I wanna be on the Food Network for these hot dogs. … I wanna have a good munchie food, backyard hot dogs, but then I want the upper-echelon gourmet dogs, make people wanna travel around the world. Eventually we’ll get there — we probably won’t start there, but eventually it’ll be like ‘They really put a twist on hot dogs!’” “We have a lot of modern ideas, a lot of innovative ideas that people wouldn’t even think about. Like eating a ‘hot dog,’" Rodgers says, making air quotes around "hot dog" as she talks. "You know what I’m saying?”

Lewis and Rodgers want to reinvent the hot dog and make a name for themselves and for their customers. Lewis says the food industry is a great way to reach people. “Everybody eats. We were both really eager about getting into our own business, finding our next wave.”

Rodgers adds, “We’re gonna enjoy being kids, but also enjoy being adults, enjoy life again. After COVID, everybody can get out of their houses, and we wanna be a place where you can feel safe to come.” 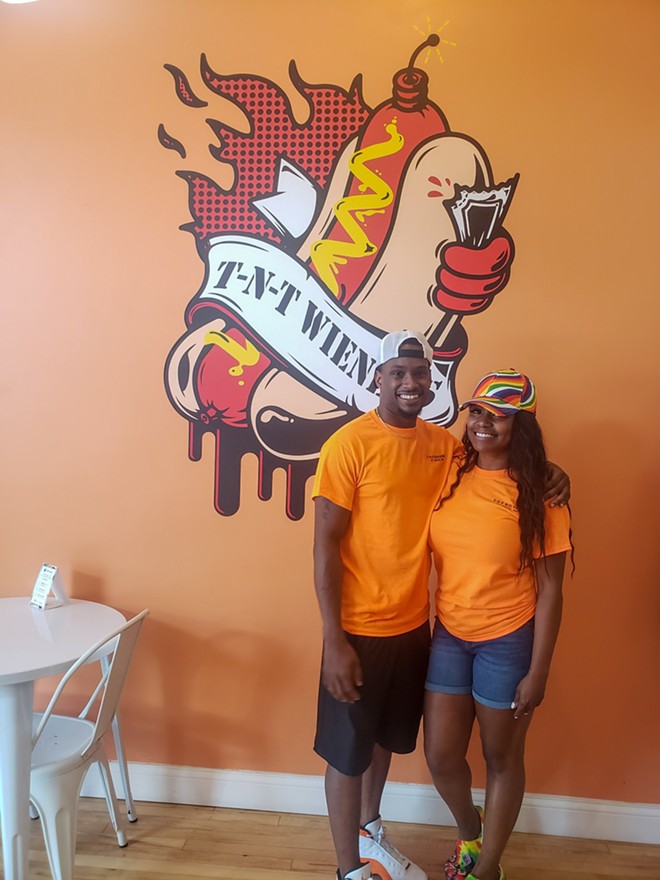