Back in 2016, partners Martha Bass and Sophie Mendelson were living two thousand miles away from one another when they realized something interesting: Both had been making ice cream sandwiches as a way to pass the time. For Bass, concocting batches of the frozen treat as a way to decompress from a job she was not into, and she'd share her wares with her cohorts in the office; Mendelson started making ice cream sandwiches as a way to spread joy among her coworkers on a farm. It didn't take long for them to notice that their endeavors had something else in common.

Five years later, Bass and Mendelson are now sharing those beloved ice cream sandwiches with more than just family and friends as they relocate their Columbia, Missouri-founded company, Sugarwitch (1634 Tower Grove Avenue), to Botanical Heights. The pair have partnered with chef and restaurateur Ben Poremba to offer Sugarwitch's ice cream sandwiches every Saturday from noon until 6 p.m. out of a vintage Airstream trailer on the patio of Olio. The brand's first outing will be this Saturday.

Founded in Columbia in 2019 when Bass and Mendelson were graduate students, Sugarwitch is a proudly queer-owned business that aims to marry the whimsy of ice cream sandwiches with their passion and background in sustainable food systems and ethical agriculture (Bass is currently working on her PhD in rural sociology at the University of Missouri; Mendelson holds degrees in agricultural education and agroforestry). The pair use responsibly-sourced ingredients and labor practices and are mindful of how even their small business can impact the overall food system. 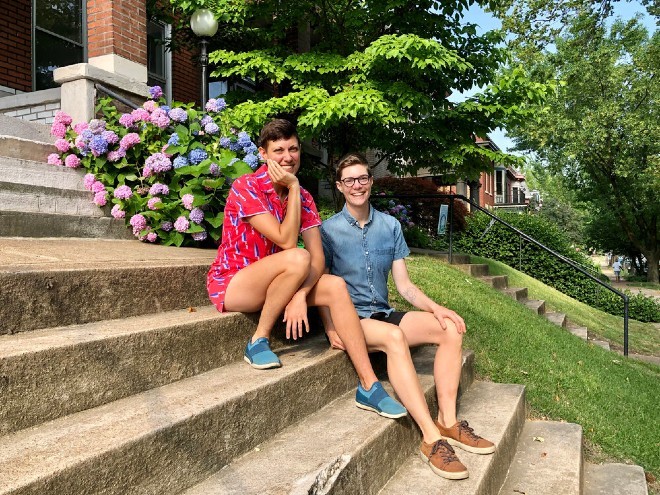 "Ice cream might seem frivolous, but we're interested in showing that a business about fun can also be about ethical practices," says Mendelson.

Bass and Mendelson began selling their ice cream sandwiches around Columbia at farmers markets and pop-ups around town, developing a robust following along the way. Though they relocated to St. Louis this year for Bass' job, the pair were not ready to give up their business and instead decided to make a go of it here. As Mendelson explains, the partnership with Poremba seemed fated.

"We were planning on doing pop-ups around town, so I filled out a contact form on his website asking if maybe we could do one with him this summer because we're fans of his restaurant," says Mendelson. "We got a call from him right away. He told us that he had just been talking about wanting to do ice cream or popsicles out of his Airstreams, and here came my email. It was very serendipitous."

Drawing inspiration from fantasy novels and sci-fi culture, Sugarwitch's sandwiches are named after the witches who have made an impression on pop culture. The "Ursula" is the brand's signature, featuring vanilla ice cream, rainbow sprinkles and a salty chocolate brownie. Other varieties include "Elphaba," featuring mint chip ice cream and a salted mint brownie, and the "Sabrina," made with rosewater ice cream and a pistachio cardamom sandie. Their vegan option, the "Kiki," features mango sorbet sandwiched between two toasted coconut rice crispies.

"We're hardcore ice cream lovers," Mendelson says. "We love the classics, but we also use what's seasonally available. We've been shopping at Tower Grove Farmers Market and stocking our freezers. Drawing from that and getting to mess around with flavors has been incredibly fun."

Still, Bass and Mendelson insist they are not the only ones having the fun. The proof? Their customers' reactions the moment they have that first nibble.

"We use super-premium ice cream with high butterfat; it's maybe a little less sweet and intensely flavored to highlight acidity, salt and interesting flavors, so it's fun when people are caught by surprise by the flavor," Mendelson says. "Our favorite is when people's eyes get really wide when they take a bite."