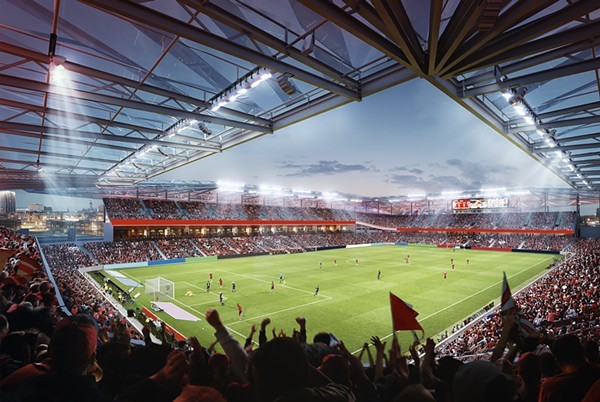 Even before Major League Soccer confirmed a new team was coming to town, St. Louis SC was promising to invigorate the area's entertainment landscape. Now, the club is showing that it's just as serious about doing that in the stands as it is on the field.

On Wednesday, St. Louis City SC announced that it has tapped Gerard Craft as its "flavor officer," a role that places the acclaimed chef at the forefront of culinary operations for the team and its fanbase. Though the arrangement will make him responsible for creating the stadium's food experience, Craft says that the role is much larger than curating refreshments for hungry fans.

"I think what we are really trying to do are things that haven't been done before in a big way," Craft says. "A lot of people are trying to do unique things [with the stadium food experience], but ownership may not allow that. This ownership group is allowing us to do something unique and bigger — to thread the needle through all of the cultures and neighborhoods of St. Louis."

According to Craft, the arrangement between him and St. Louis City SC began two years ago, even before it was certain St. Louis would get an MLS team. Excited by the prospect of working in the framework of stadium food, Craft contacted the owners and offered to help them create a world-class culinary experience.

"I reached out and said that I was really interested in stadiums, and food in stadiums, but also the experience of stadiums and how they can be not just a place for sports fans going to a game, but a full experience outside of that."

Craft told the organization that he had a lot of ideas and that they should get in touch when they were ready to begin creating their food story. His vision resonated with the owners, who were looking for something more than just the standard stadium fare.

"From the outset, the ownership group has really seen this project as something special and a catalyst to bring people together using the sport of soccer," says Vin Ko, director of team operations for St. Louis City SC. "Soccer is a global sport, and it has the ability to bring the community together in ways others don't."

Craft is working alongside Levy, a stadium hospitality provider whose properties include the Enterprise Center, Barclay's Center and STAPLES Center, to create a uniquely St. Louis experience at the stadium. However, more than simply representing St. Louis foods and restaurants for spectators, Craft is hoping that the soccer club's food service will generate enthusiasm for the city's culinary scene beyond the stadium.

"This is going to be more than a Niche Food Group [Craft's company that encompasses his restaurants] stadium,” Craft says. “It will be somewhere to help bring to light so many unique spots throughout the city that people may not go to. Bosnian, Asian, Thai, South American, Mexican — we really want to bring a diverse offering that matches the soccer fan base.”

Though the stadium is still two years away from opening, Craft and Ko are hoping to have an immediate impact on the city’s culinary scene. Currently, they are searching for food partners to be a part of the project in a grassroots way, asking fans to visit their website, stlcitysc.com/flavor, to tell them about their favorite restaurants. As Craft explains, he and St. Louis City SC are hoping to transform the way people think about stadium food, and they are searching for the off-the-beaten path places that even they might not know about to help them create a full picture of St. Louis’ vibrant food scene.

“For the next two years, we want to explore and dine at as many places as possible, and we want to use the time to pump up the St. Louis food scene,” Craft says. “We’re going to use the St. Louis City SC platform to give voices to these restaurants.”