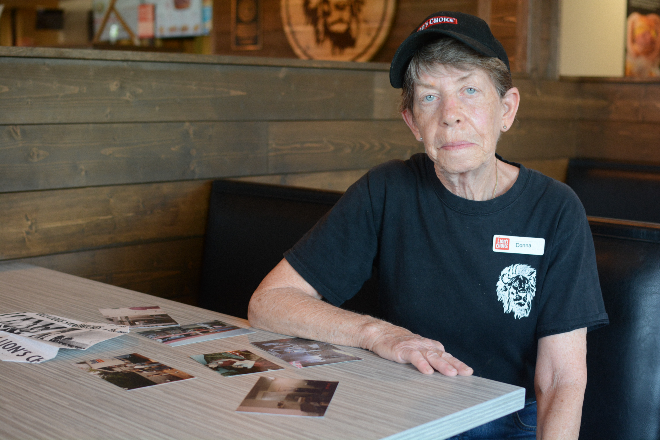 It was 1968, and a twenty-year-old Donna Hollie needed a job. After graduating from high school a few years prior, Hollie had been babysitting to make some money, but she was desperate to get a more consistent form of employment. The reason it was so difficult to find a job was one of logistics: She needed work somewhere she could walk to, and back then, her options were limited. After all, Manchester Road was a far-cry from the buzzing thoroughfare it is today, comprised of only a handful of businesses along its two-lane stretch of pavement.

"There wasn’t hardly anything out here,” Hollie recalls. “Both my mom and dad worked, and they needed our two cars, so I had to walk to someplace. My mom saw an ad in the paper that said Lion’s Choice needed help, so I said OK and went to the interview. That’s when I met Clint Tobias. He asked me my grade average and what I liked to do in my spare time. I told him that I babysat right now but was on the hunt for a job and that I liked cleaning and was dependable. I promised him that I would work for him for a long time.”

When Hollie made that promise to Tobias 53 years ago, she had no idea she’d still be working for the roast beef brand today. The chain’s longest-serving employee by a long shot, Hollie has the distinction of being with Lion’s Choice (multiple locations, including 14919 Manchester Road, Ballwin; 636-394-8564) since it was just a single outlet that had been in business for only a year when she started. Over her tenure, she’s watched the chain grow, expand and undergo ownership change, making her the Lion’s Choice historian in residence, a role she embraces with pride.

When she walked through the doors of the original Ballwin Lion’s Choice on September 18, 1968, Hollie had no plans to make it a career. She had no plans not to either, and she credits her lengthy tenure with the restaurant to the simple passage of time and the fact that she was treated well, especially financially.

“I started out at $1.50 an hour, and they kept giving me raises,” Hollie says. “My mom worked for McGraw Hill, and she was comparing her wages to mine. She told me I was doing better than her – that my raises were comparable, but I got them way sooner. What she had to wait for in a year, I was getting in three months. I said, well I’m not going anywhere for sure.”

Those first couple of years turned into five, then ten, then twenty. Though she thought about leaving on one occasion early on into her tenure, she realized that she was only considering a move because she felt that she should; not because she actually wanted to. Instead, she stayed put, making Lion’s Choice the only job she’s ever held. Hollie says that she sticks around because of the people. Whether it was the roast beef regulars or the kids from the subdivision behind the restaurant dropping in for a nickel cone, she relishes that she is a part of her customer’s lives and feels thankful that they are willing to share a part of their day with her.

The customer focus of the job has not changed one bit over the years, even as the brand expanded. The other thing that has remained consistent, according to Hollie, is the food. As the Ballwin location’s resident meat slicer of over five decades, she’d know if the roast beef changed and insists that it hasn’t. The chain still uses the same recipe and seasoning blend and has never compromised its standards. She believes the secret ingredient is not so secret: Real roast beef. As she explains, Lion’s Choice uses real top sirloin roasts, not the compressed meat that other places use. That, together with the restaurant’s seasoning blend, horseradish and buttery buns, is the key to its staying power.
“It still tastes the same as it always has,” Hollie says. “We added hot dogs, and a little later, ham, but other than that, we’ve kept things basically the same. One time I asked Mr. Tobias why we don’t have other things, and he told me that we have to keep it simple and focus on what’s important – and what’s important is the roast beef. He said that is we get in too much other stuff, it takes away the focus and that we were doing great the way we were. He was a smart man.”

Hollie’s taste for the roast beef sandwiches has remained just as consistent. Though she doesn’t eat them every day – she saves her sandwich orders for when she needs a treat or when her husband begs her to bring it home – she still regularly enjoys the same order she’s been eating all these years: A classic roast beef sandwich with seasoning on the bun.

“Just the way they come; I don’t put barbecue or nothing on them,” Hollie says. “I like the buns and the butter on them. If I get fries I’ll put ketchup on them. And I like the cole slaw, too.”

Looking back on her time with Lion’s Choice, Hollie is glad things turned out the way they did. Her contentment is contagious; both her daughters currently work at Lion’s Choice, one in Wildwood and one who has been at the Eureka location 28 years. However, Hollie is not ready to pass on the torch, having no plans to retire anytime soon. The way she sees it, as long as she can still run the meat slicer during a hectic lunch rush, she should be good. She doesn’t need the money, but she loves the job so much that she is going to stay as long as the company will let her.

“I’m going to keep on until I feel like I can’t do it, but as long as I can still do it I will,” Hollie says. “What’s the sense in sitting home and doing nothing? I believe in working and doing things because if you don’t, you will lose it. Your memory goes blank if you don’t’ get out in world. I don’t’ want to be like one of those old-timers – well, I am an old-timer but I don’t want to be unable to do things. I’ll keep at it as long as I can and as long as they will have me. I asked them one time well how long can I work, and they said I can stay here as long as you want. I thought, “Yay!”