Pizza Champ, from the Team Behind Elmwood, Is Coming to Maplewood This Fall 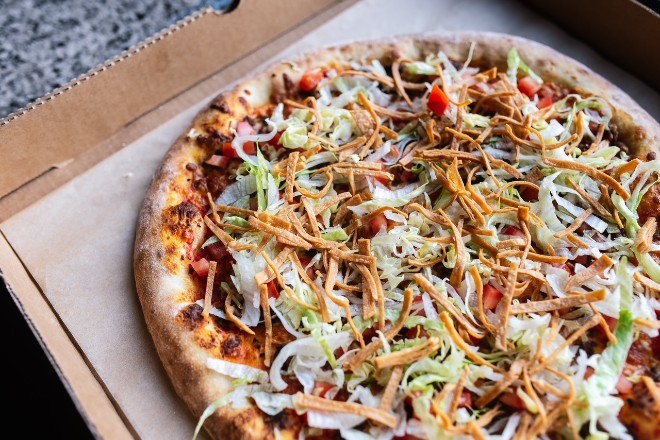 When Elmwood (2704 Sutton Boulevard, Maplewood; 314-261-4708) reopens its dining room on June 10th, it will look a little bit different than it did before the pandemic shuttered its doors last March ... at least temporarily. Owners Adam Altnether and Chris Kelling announced that they will resume dine-in service as a pizzeria for the next three months in anticipation of opening a brick and mortar for its pop-up-turned-pizza brand, Pizza Champ, this Fall.

"Even before the pandemic, Adam and I have always said that our second concept should be a pizzeria," Kelling says. "Really, there isn't a true pizzeria in Maplewood, and when we had to decide what was going to work with carryout during the pandemic, pizza was familiar. It became its own thing, and we had a number of orders from people who I don't think ever stepped inside of Elmwood. We wanted to capitalize on that. We're in negotiations for a lease for a pizzeria, but we wanted to keep the pizza in front of people."

Altnether and Kelling began selling pizzas as a way to keep Elmwood afloat last Spring, but in no time, it became such a success that it took on a life of its own. This prompted the partners to get serious about exploring it as a brand in its own right, and they are on the cusp of making that come to fruition.

However, they are not there quite yet. Because they still have to finalize their lease agreement and convert the space into Pizza Champ, they have found themselves in a position where they are ready to reopen Elmwood, but not quite ready to open Pizza Champ as a standalone spot. Rather than ceasing their successful pizzeria operations, they decided to temporarily reopen Elmwood as a pizzeria while they work to open the doors of Pizza Champ, hopefully in the next three months or so.

Kelling is clear that the changes to Elmwood are only temporary. Both he and Altnether are excited to get Elmwood back to where it was, pre-pandemic, as soon as possible, and they look forward to having two different restaurants that serve two very different purposes in the Maplewood dining scene. In the interim, Kelling expects the temporarily pizza-focused Elmwood to actually be a blend of the two concepts; in addition to pizza, Altnether will be cooking Elmwood's signature burger, assorted skewers and other dishes that, in his words, have the "Elmwood DNA."

"There have been a lot of changes since we started this project," Kelling says. "What's still important to us is putting out quality product and making our guests happy. This will allow us to have a little more fun doing it."