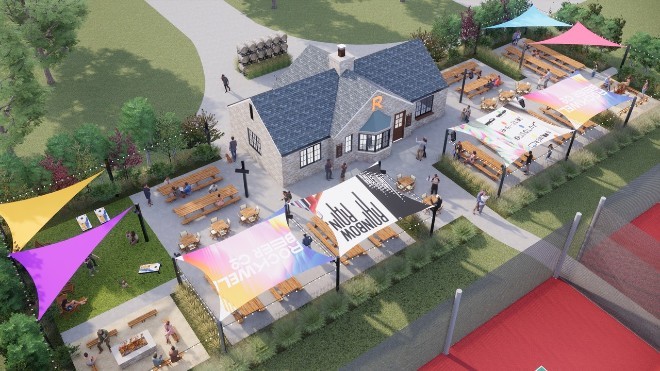 Already a beloved community gathering place, Francis Park is about to get even more popular — and delicious. The south city park, located in the St. Louis Hills neighborhood, will be the site of the forthcoming Rockwell Beer Garden, a food counter, concession stand and outdoor dining and gathering space launched by the craft brewery, Rockwell Beer Co. (1320 South Vandeventer Avenue, 314-256-1657).

In plans announced over the weekend, Rockwell Beer Co. is in the process of renovating Francis Park's 1929-era "comfort center" building adjacent to the park's tennis courts. Opening later this summer, the space is described as a "focal point for community gathering within the park, completely with plenty of outdoor seating, fire pits and an outdoor recreation area." The new concept builds upon St. Louis' past beer garden culture, respecting the park's history as an integral part of St. Louis Hills.

"We are obsessed with reinvigorating the longstanding beer garden culture in St. Louis, because it provided such a tremendous sense of community to people in our city,” says James Sanders, co-founder of Rockwell Beer Co. “With the tremendous help and support of various St. Louis Hills neighborhood associations, Alderman Tom Oldenberg, and the City of Saint Louis, our Rockwell team is creating a gathering spot in Francis Park that has something for the entire family. As a longtime St. Louis Hills resident, I am especially proud of this accomplishment.”

In addition to Rockwell's beer, the beer garden will serve wine, cocktails, non-alcoholic beverages and food described as "family-friendly fare." Full-service dining will be available.

The concession area is not the only part of the park getting a facelift. The beer garden project coincides with renovations to the Francis Park tennis courts, some of which will be repurposed as pickleball courts. The beer garden will have pickleball equipment for patrons to use.

The beer garden will be the second location for Rockwell Beer Co., which opened its brewery and tasting room just east of the Grove in 2018. Known for its family-friendly, come-as-you-are style, the brand proved to be the perfect fit to bring such a community-oriented space to the park.

“It has been a rewarding process to work with the Rockwell team and help them bring the Rockwell experience to Francis Park,” says Oldenberg. “The park is the crown jewel of our neighborhood. Having a new place – with high quality food and drinks – for people of all ages to gather makes the park even more special.”