Urban Fort Play Cafe Expands to Include Gather, Focused on Food and Coffee 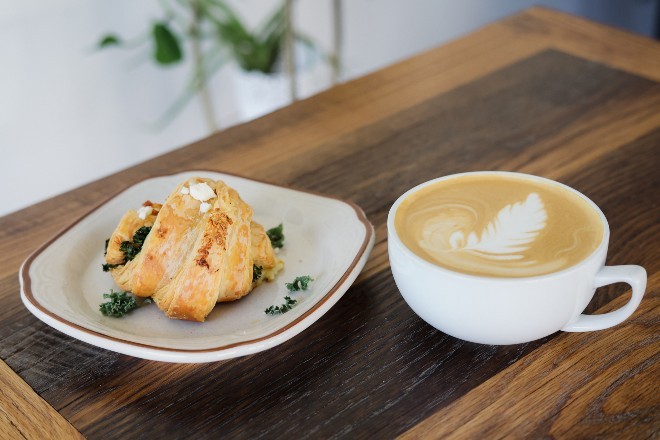 If the COVID-19 pandemic made one thing crystal clear for Urban Fort (1854 Russell Boulevard, 314-376-4235) co-owners Monica Croke and Megan King-Popp, it was that the overwhelming majority of their business came from the customers who patronized their play area. Even though they prided themselves in serving excellent coffee, tea pastries and sandwiches, they had a hard time getting people to see them as anything but a family play place that happened to have some food and drinks.

That's about to change with the launch of their new cafe, Gather, which will open adjacent to Urban Fort on May 6. The new spot is meant to both service Urban Fort's play area and be a standalone spot for people who are simply interested in grabbing a cup of coffee and something to eat — something King-Popp feels was difficult previously.

"The majority of people who would pass by thought we were a daycare and didn't know we were also a cafe," King-Popp says. "For those who did come in, the atmosphere wasn't conducive for people who don't understand five-year-olds. People tried to support us at first, but it just wasn't for them."

To create Gather, Croke and King-Popp built a soundproof wall that now divides the building into two distinct spaces. Urban Fort remains on one side of the wall, with Gather taking up the other. Guests of the play cafe can order from Gather, while those who are not interested in being on the play side will get a coffee-shop experience, sans kids.

As King-Popp explains, the idea to create a distinct coffee-shop concept occurred not long after Urban Fort opened in 2017. Though she and Croke envisioned the place as serving both those with and without kids, it became quickly apparent that, being the only play cafe at the time in St. Louis, the kid-friendly space was the major draw.

When the COVID-19 pandemic hit, she and Croke watched as other restaurants and coffee shops were able to turn to carry-out to sustain their business. Because they were not associated with their food and beverage operation, they were unable to make a go at that transition — so they decided to make a change.

"We pooled our resources and decided to make the cafe something new," King-Popp says. "People didn't know that we had food, so we really had to rethink things. We decided that we were just going to view 2020 as the year we changed our business model."

Though the change is significant, King-Popp also insists that much of the essential character of their business remains the same. For those who patronized Urban Fort for its play cafe, the vibe should feel consistent with what they've become used to. There will just be a more efficient use of space.

King-Popp is confident that, once people know about what Gather has to offer, it will become a community spot for everyone. She remains confident in the quality of their products — coffee from the Living Room, espresso from Blueprint, tea from Big Heart Tea Company, homemade pastries and lunch items — and feels excited that the food and beverage side of the business will be more visible.

"We see ourselves as approachable," King-Popp says. "Our brand, as well as our food, is welcoming to everyone, whether you are a family who's been coming in or a new customer. We're so excited about this opportunity and have gotten nothing but positive energy from the neighborhood."