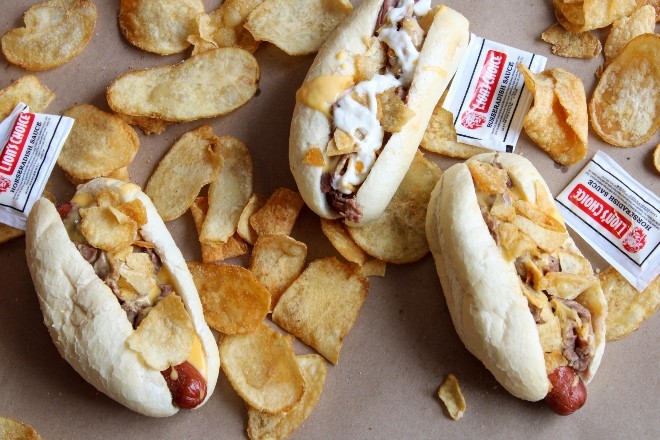 "We were pretty confident coming out of the box on this one, because Lion's Choice is such a St. Louis favorite," Ewing says. "Still, we didn't know how many we were going to sell, and in less than a week, we sold over 400. We're looking at a total of about 600 sold. Some other specials have come close, but this is definitely the biggest one we've ever done."

According to Ewing, the idea for the Lion's Choice dog came from his shop's promotions manager, who often reaches out to local business about the collaborations that have become a signature of the Tower Grove East hot dog shop. Once Lion's Choice agreed to get on board with the idea, his chef came up with some ideas that resulted in a quick back and forth with the roast beef brand to get it right.

"This one almost created itself," Ewing says. "With the profile of the beef, we had a good idea of what it would really taste like. Lion's Choice had never done this before, so it was really a matter of us presenting it to them and saying, 'We know this is going to taste good.' Because we've done this, we knew what flavor to expect."

Ewing says the key to the Home Run Hot Dog — as with other collaborations he's done with places like Gioia's Deli, Crown Candy Kitchen and Dogtown Pizza — is to make sure that both brands are distinctly represented in the special. The trick, he explains, is to make sure that their beef looks like their beef, and his restaurant's hot dog looks equally recognizable. This translates into a signature Steve's Hot Dog, covered in Lion's Choice shaved roast beef, then topped with cheddar cheese sauce, Lion's Choice hand-cut potato chips and, of course, a sprinkle of Lion's Choice famous roast beef seasoning.

Guests who wish to experience this taste of St. Louis can do so via dine-in, delivery or carryout through Steve's Hot Dogs.

As for future collaborations, Ewing is open to working with any iconic St. Louis brand, but he's particularly interested in exploring one with St. Louis Bread Company. However, he's open to anything that celebrates his beloved city, which is why he does these specials in the first place.

"We're open to collaborating with all the St. Louis businesses," Ewing says. "This is about bringing two businesses together and having them promote each other. That's what this is all about."