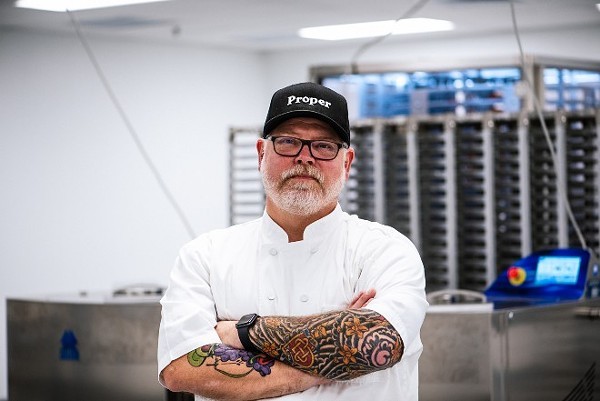 Chef Dave Owens doesn't like to use the word "passion" when it comes to his longtime culinary inclinations and how he got where he is today. However, no matter what you call it, it's clear that he was destined for food to be a major part of his life.

"I feel like the word 'passion' is so overused," Owens says. "Certainly, food was always an interest. As a kid, I was always cooking for my family and trying to make things out of whatever we had around, even if it was canned goods, like doctoring up Campbell's soup to make it taste good. We were a big family — I was one of seven children — so there were always a lot of people around and meals at home. We never went out so much, so I think that's where it started."

Now four decades into his culinary career, Owens finds himself at the helm of the Honeybee Edibles ship, a venture from the soon-to-open Proper Cannabis (properbrands.com) medical marijuana company. For the veteran chef, the opportunity to apply his skills in an emerging industry is something that brings him back to his early cooking days, when the culinary field looked vastly different. As he explains, when he started out in the business, there weren't a lot of opportunities for chefs, which was why his parents dissuaded him from getting into cooking as a career.

"I always wanted to go to culinary school, but my parents told me there was no way I was going to be a cook," Owens says. "They wanted me to be a doctor, so I went to school for pre-med and PT [physical therapy]. Once I decided I didn't want to do that, I asked myself, 'What now?'"

Despite his parents' initial reservations, Owens got a job at the Sheraton hotel at Westport and enrolled in culinary school simultaneously. During school, he also participated in the American Culinary Federations' apprenticeship program and worked under famed St. Louis chef and restaurateur Bill Cardwell, who he credits with making everything click.

"I started at Cardwell's in 1989, when it had been open for a year and was really the hot ticket in town," Owens says. "He really opened my eyes to what great food can be and using farmers as a resource, as well as the things we could get from local farms. I pretty much owe all I learned to him."

Owens worked for Cardwell's until 2005, when he left and opened the acclaimed restaurant Terrine. After two years, he was approached by one of Terrine's regular customers, the former owner of Bissinger's, who wanted to bring a culinary viewpoint to the chocolate company's operations. Intrigued, Owens accepted the offer and became Bissinger's chief chocolatier and VP of taste, helping the storied confectioner develop new products and maintain the brand's quality, even as it expanded.

When Bissinger's sold in 2019, Owens looked for new opportunities in the confectionery space. Intrigued by the medical marijuana edibles market, he was in conversation with a cannabis group to join their team; when they didn't get their license, Owens decided to go all in on his job hunt in the field, eventually landing with Proper Cannabis. He could not be more thrilled with where he ended up.

"We've had so many great conversations about what we can do and what we want to become," Owens says. "They've invested serious money into this, and I wouldn't have come on board if I didn't feel they have such a commitment to quality."

That quality is something that drives everything Owens is doing at Proper Cannabis. With his background in fine confections, Owens and the Proper team are hoping to redefine what medical marijuana edibles can be by sourcing the finest ingredients and creating products that are delicious in their own right.

"It's a great tasting product that just happens to contain cannabis," Owens says.

Now that he is close to opening, Owens admits he has many sleepless nights. Between nailing down the recipes and navigating the state of Missouri's complex web of medical marijuana regulations, he's busy and stressed well beyond what a normal restaurant or confectionery opening would bring. Still, he wouldn't want to be doing anything else.

"There's a lot of excitement in the marketplace," Owens says. "I haven’t sold one thing, and I already have people coming to us saying they can’t wait to get our products. They want a more diverse selection, they want to have choices, and we're going to be able to give that to them. These are exciting times."

Owens took a break from getting ready for Honeybee's launch to share his thoughts on the St. Louis food and beverage community, one thing in the medical marijuana market he'd love to see, and what has inspired him during the difficult past year.

What is one thing people don’t know about you that you wish they did?
I am a vegetarian of 30 years.

What daily ritual is non-negotiable for you?
Morning iced coffee.

If you could have any superpower, what would it be?
Super strength.

What is the most positive thing in food, wine or cocktails that you’ve noticed in St. Louis over the past year?
How even under the adverse conditions over the year-plus, the food community continues to put out amazing food as well as helping others.

What is something missing in the local food, wine or cocktail scene that you’d like to see?
Cannabis cocktails.

Who is your St. Louis food crush?
My wife, Margaret Kelly.

Which ingredient is most representative of your personality?
Chocolate.

If you weren’t working in the culinary field, what would you be doing?
I think if I could work more closely with farmers, particularly those that grow cacao, that would be an awesome way to make a living.

Name an ingredient never allowed in your kitchen.
A bad attitude.

What is your after-work hangout?
Usually it's home, but since starting work at Proper Cannabis, Global Brew has become a great spot — and you can bring your dog!

What’s your food or beverage guilty pleasure?
Probably Taco Bell. I worked there in high school and have a place for it ever since.

What would be your last meal on earth?
With my wife, and it would include chanterelle mushrooms and truffles.