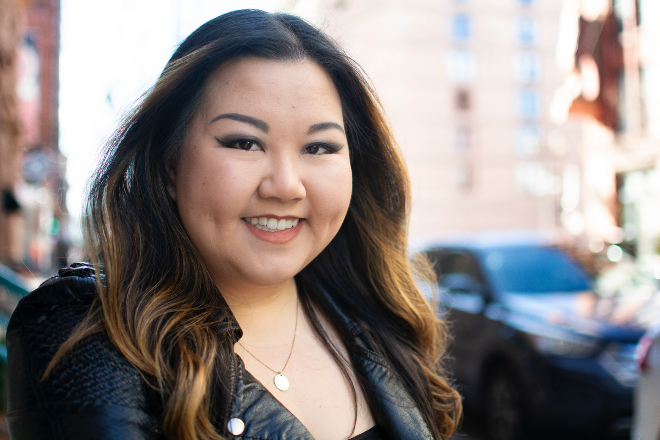 Opening Sando Shack was never part of the plan for Amy Guo.

For more than two years, she and her partner Dan Jensen had been in the process of opening a poke spot at City Foundry, but delays in the project kept pushing back the timeline. The wait wasn't ideal, but it was tolerable until this October, when Guo got laid off from her full-time job. In need of a project and income, she and Jensen decided they had to figure out something in the meantime.

"We really started thinking if there was something we could do that wasn't a brick and mortar but a small business venture," Guo says. "One of the things we really liked when we were living in Seattle were Japanese sandwiches. We started looking into them to see if we could put our own little twist on them, and after some research, we realized that we could do this."

If that meantime side project, Sando Shack (@sandoshackstl), was not part of Guo's original plan, opening a restaurant certainly wasn't — at least not until recently. A self-described nine-to-fiver who has spent her entire career in the corporate world, Guo says the idea of upending her life for such an undertaking was never something she imagined herself doing. Laser-focused on her career since she entered college, Guo instead found success working in business and marketing, and eventually went on to earn her MBA.

Graduate school sparked in Guo an interest in entrepreneurship, but she was still trying to figure out what that meant for her career path. However, after moving to Seattle and meeting Jensen, a picture emerged. The pair bonded over a shared love of food and travel, and they spent most of their free time trying new places to eat. Jensen, who has a background in restaurants, expanded Guo's culinary horizons, and she taught him about the business side of food. It wasn't long before she began to consider opening a restaurant as her next move.

Guo and Jensen were both passionate about seafood and were particularly moved by poke. But the more they looked into opening a poke restaurant in Seattle, the clearer it became to them that the market was oversaturated. This led Guo to start thinking about other locations, including her hometown, St. Louis. Around that time, the City Foundry project was beginning to recruit businesses for its food hall; Guo thought it was the right fit, so she and Jensen signed on.

That was 2019. Plagued by delays in the beginning of the project and now the COVID-19 pandemic, City Foundry is still not open. However, Guo is excited that the extra time has given her and Jensen the energy to focus on Sando Shack, something they might not have ever thought of pursuing were it not for the delay in opening their poke restaurant. Since October, the pair have been doing almost weekly Sunday pop-ups at their friend's Central West End spot, Saigon Cafe. They have been thrilled with the reception. In fact, the feedback has been so good that they recently bought a food truck and plan on building their brand, even when their poke spot opens at City Foundry. It's a funny twist of fate that has somehow turned her into a restaurateur — something she is still getting used to.

"It's been really hard, because I am used to having meetings dictate my schedule," Guo says. "I'm still getting used to this lifestyle where I don't have a lot going on Monday through Friday, but then I get really busy on the weekends. It's weird feeling like Sunday nights are when I can relax and wind down, because I am used to getting ready for the week on Sundays. It's the opposite of what I've always done, but I like it. I like using my skills and seeing that what I am doing is working. In the corporate world, you're often a small part of a large project and never get to see the end result. Here, you actually see how what you do is being utilized. It's very satisfying."

Guo took a moment away from Sando Shack to share her thoughts on the St. Louis food and beverage community, her love of coffee and Szechuan peppercorns, and why increased communication is one COVID-era restaurant practice that she hopes sticks around post-pandemic.

What is one thing people don’t know about you that you wish they did?
I was born in Maryland and then spent some years living with my grandparents and going to school in China until I was nine years old. That's when I came back to the U.S. and finished school and relearned English. I'm super grateful for the experience I had in China and proud to say now I'm fluent in both English and Mandarin.

What daily ritual is non-negotiable for you?
Coffee. Sadly I see my productivity difference when I have coffee versus when I don't. And it's just so yummy!

Who is your St. Louis food crush?
I have a long list of restaurants to try since moving here! I'm doing a pretty good job going through the list but still have so many places to try. So far, I'm really obsessed with the beef carpaccio from the Bellwether. That restaurant also has such a good vibe and a nice rooftop patio.

Which ingredient is most representative of your personality?
Szechuan peppers. It's an exciting spicy flavor that brings a level of comfort and homey feeling. Plus I love Szechuan cuisine.

If you weren’t working in the restaurant business, what would you be doing?
My background is in advertising/marketing. Up until recently, I was working in a strategic partnership role for a tech company. I definitely loved it and would continue doing that.

As a hospitality professional, what do people need to know about what you are going through?
Speaking from a business standpoint, I've really had to think about how to adapt our marketing methods to fit the current circumstances we are in. We haven't been able to draw crowds in or host any type of physical grand opening to generate customer engagement like a lot of new restaurants would do. We are also not a brick and mortar where we can rely on surrounding foot traffic for business, so I have really been focusing on social media marketing and partnerships, reaching out to other local businesses and restaurants to do collaborations in order to get our name out there.

What do you miss most about the way you did your job before COVID-19?
Being social, giving handshakes and hugs to our friends and customers. Meeting new people and engaging with our customers are both very important to us, so we can't wait to gather together again in a safe environment.

What do you miss least?
Crowded establishments. I enjoy how restaurants, bars, gyms, etc. have things a bit spaced out now.

What have you been stress-eating/drinking lately?
Lots of takeout food and wine.

What do you think the biggest change to the hospitality industry will be once people are allowed to return to normal activity levels?
The level of communication and transparency between the businesses and its customers. Since the pandemic, businesses have over-communicated about what they're doing and how they're taking the proper precautions of keeping their customers and staff safe and healthy — which is great. We believe that this level of communication and transparency should stay a consistent goal even after normalcy returns.

What is one thing that gives you hope during this crisis?
This community and the amount of support we see everyone giving each other. From trying each others' foods, offering help and spreading the word through advertising, collaborations and social media, this community has shown that working together is the key to getting through a crisis like this.