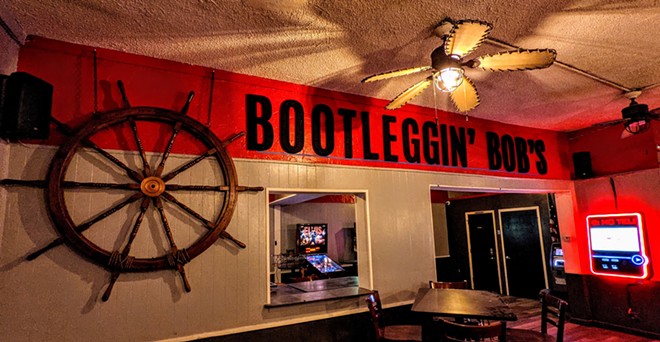 One of the most loved dive bars in south city, Colorado Bob’s (3457 Morganford Road), temporarily closed in late 2019 after losing its liquor license. The bar managed to reopen in the spring of 2020, just a week or so before the pandemic hit.

When Colorado Bob’s locked its doors and covered its windows with butcher paper, dive bar fans feared the worst.

Would fans of the Morganford bar scene really never raise a glass at Bob’s again?

Well, yes and no. Colorado Bob’s is gone but now in its place is Bootleggin’ Bob's, the newest dive bar on the south side.

Bootleggin’ Bob’s is owned by Brenton Brown and Eddie Belter, who also own the Bootleggin’ barbeque joint on Washington Avenue downtown. The Bootleggin’ boys jumped when they saw an opportunity to own (and honor) a classic “what made America” tavern.

Brown said they’re describing the new space as an “elevated” dive bar. The interior shape of the bar is still the same, but the floors have been updated and the walls are covered in reclaimed wood. Even the bathrooms have been updated, which is an important improvement for any dive bar.

But Brown says that the freshly professionally cleaned out air vents are actually the biggest improvement to the place and that it appears that the previous owners hadn’t addressed that particular bit of maintenance for at least twenty years.

The bar appears shipshape inside, with the classic nautical theme and the distinctive rounded bar remaining alongside newer coats of paint and a few small flat-screen televisions.

What makes this dive bar elevated, though, is not just the style; it’s the menu.

These barbeque restaurant proprietors are bringing those meaty, smoky flavors on down to Tower Grove South.

The bar sells Pretzel Boy pretzels and pizza, but not just the crappy Jack’s pizza that you’ll find at other dive bars. They’re selling their own pizzas with three distinctive flavors: Buffalo (with smoked chicken) Porky’s Party (with BBQ sauce and pulled pork) and the Booglegger (which includes brisket, pickles and onion and is basically a hamburger on a pizza.) Visitors can also order a pizza to go or get a frozen one to bake a home.

The bar has a small patio out front and a big tent in the back. Colorado Bob’s boat is still out there docked on the sidewalk, too, though Brown says it’s likely soon to get an updated paint job.

And this isn’t the only project that the Bootleggin’ gang has hidden in its treasure chest. They’re also partnering with neighbor Alpha Brewing Company (4310 Fyler Avenue) to brew up a hard seltzer called “Hotel Lobby” which is cucumber and citrus flavored, like the water you get in the lobby of a posh hotel.

For more information on Bootleggin’ Bob’s, visit its Facebook page.