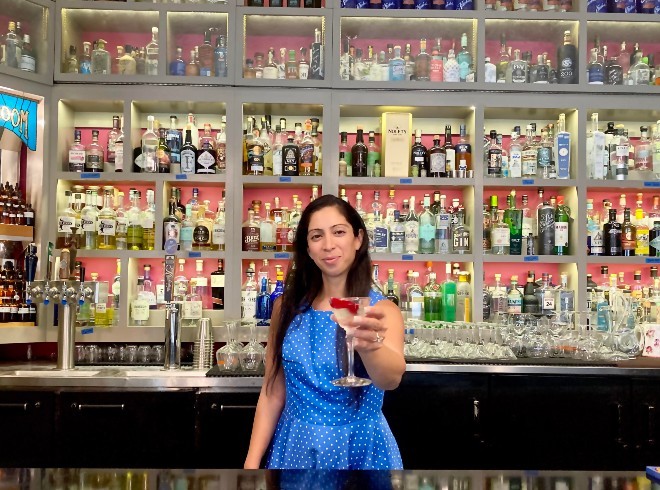 The international spirits spotlight is focused on St. Louis, thanks to Natasha Bahrami. Last week, the acclaimed bar professional was named to the Gin Hall of Fame, the highest honor bestowed upon anyone who works in the category of gin.

Bahrami was presented with the honor on February 25 at the annual Gin Magazine World Gin Awards, which were held virtually this year. She is the first and only American to have ever been inducted into the Gin Hall of Fame and is one of only nine people in the world to hold the honor. The three other inductees who received the recognition alongside Bahrami are Lesley Gracie, master distiller at Hendrick's Gin; Jean Sébastien Robicquet of France's Maison Villevert; and spirits writer and judge David T. Smith.

"I find such joy working to expand the knowledge and experience of the gin spectrum, and I am absolutely humbled by this accolade," Bahrami says in a press release announcing the induction. "For the past seven years it's been my privilege to help ignite a movement for gin appreciation. The EU and UK are rightfully considered powerhouses of the gin world, but the United States is one of the most powerful consumer markets for gin, and that's growing every day."

Bahrami got her start in the hospitality business at an early age, growing up in her parents' beloved restaurant, Cafe Natasha's. After leaving St. Louis to pursue a career outside of the industry, she returned to her hometown with a passion for gin and a determination to make her city a major player in the international gin scene. She founded the Gin Room (3200 South Grand Boulevard, 314-771-3411), a gin-focused bar adjacent to Cafe Natasha's on South Grand in 2014, and launched Ginworld, the largest gin festival in the United States, as well as an educational platform for the spirit. She was also recently named as the Director of Gin Curation at the Museum of Distilled Spirits.

Currently, the Gin Room is offering to-go cocktails as it prepares to reopen its dining room and patio. Bahrami plans on offering in-person service this Friday, which guests can make reservations for here.