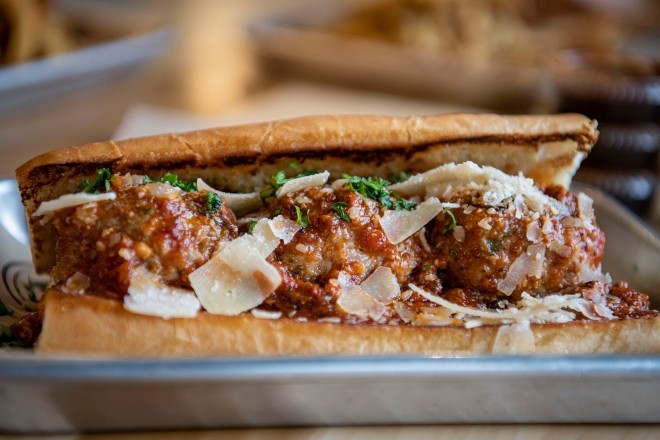 Big changes are underway — at least for now — at the acclaimed Grove barbecue restaurant BEAST Butcher & Block (4156 Manchester Avenue, 314-944-6003). Over the weekend, owners David and Meggan Sandusky announced that they are temporarily suspending their barbecue operations and pivoting to a sandwich pop-up, which will run out of the butchery side of the complex. The restaurant part of the business will be closed during this time.

According to David Sandusky, the changes were necessary as the Grove restaurant works to remain viable during the pandemic, a challenge due to the space's large physical footprint. Though the city of St. Louis has allowed restaurants to accommodate in-person dining, he and Meggan have erred on the side of caution, offering only takeout and delivery throughout the COVID-19 outbreak. Because of this, it simply did not make sense to continue to operate at full capacity, at least until he and Meggan feel comfortable reopening for in-person dining.

"We are going to keep the butcher shop open, because it is the engine for all three locations," Sandusky says of his other properties, which includes BEAST Craft BBQ and BEAST Southern Kitchen & BBQ. "The shop has been doing really well during the pandemic, so we want to create a menu that uses their product and gives them the opportunity to do some stuff they've never done before — stuff they are good at."

Indeed, the team at the Butchery has proven it has some tricks up its sleeves. In just a couple of days, the pop-up has already made a name for itself thanks to its soon-to-be-signature "Pit Beef and Cheese" sandwich. The meaty wonder, which is a mound of shaved chuck eye that is heated on a griddle and heaped onto a beef tallow bun, then topped with barbecue rub and molten white cheese, is a direct challenge (in good fun, of course) to the roast beef sandwich at the iconic Lion's Choice. In fact, the beloved St. Louis roast beef institution has even commented about BEAST's sandwich on Twitter, calling it "Straight Fire."

According to Sandusky, the "Pit Beef and Cheese" is not just a random — albeit delicious — sandwich offering. It's the result of experimentation he and his team have been doing with different barbecue styles over the past several months. Sandusky is particularly interested in the east coast style, especially popular in Baltimore, that involves smoking meat directly over the fire (as opposed to off-set like in Texas barbecue) and regularly turning and basting it in marinade to develop a pit-roasted flavor.

In addition to the beef, BEAST's sandwich pop-up will feature a pimento smash burger, smoked meatball sub and an Italian beef sandwich. House-made gumbo and a Lenten cornbread catfish sandwich are also on offer, and Sandusky expects to add additional items as the concept develops.

As for the restaurant and barbecue, Sandusky expects the closure to last approximately six to eight weeks. In the meantime, he is excited to offer something that showcases what his team of capable of doing.

"We just want them to be able to explore and see what they can do with it," Sandusky says. "It will be a fun new thing."