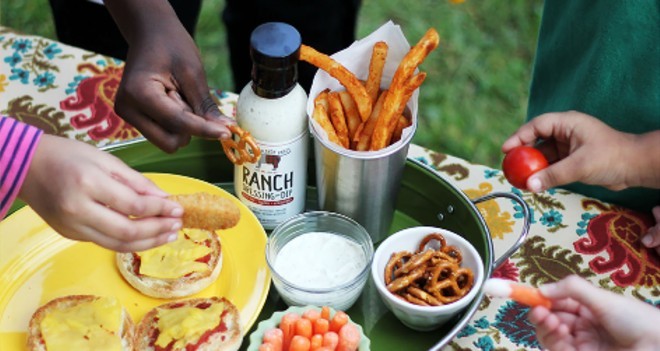 Amie Simmons admits she has a ranch dressing problem.

For as long as she can remember, she's devoured the creamy condiment on everything from pizza crust to fries; it even served as her main food group when she was a college student. That's why, when she went vegan eight years ago, she was so desperate.

"I was a ranch addict in college," Simmons says. "I went to Mizzou and was a vegetarian. Our dining hall didn't have many vegetarian options, so I lived off of French fries and ranch dressing for an entire year. I had plates of them for lunch and dinner. When I went vegan, there was no such thing as vegan ranch. There were a few companies that tried to make it, but they just didn't taste good and weren't shelf-stable. We spent so much money buying and then throwing out bottles. Finally, my husband said, 'You need to make ranch dressing.'"

For Simmons, the road to ranch entrepreneurship through her brand, Floydy Pants (www.floydypants.com), has been a long time coming. A vegetarian since the mid-1990s and a vegan since 2012, Simmons has gone down several career paths — from art to nursing and everything in between — all the while searching for her passion. Animal welfare has been the constant thread in her life; she paired that with her interest in healthful eating, and she soon realized that she had a passion for creating vegan dishes and sharing her talents with others.

Her involvement in the St. Louis vegan community led her to begin a Facebook group called Kids Vegan Lunch Box to help fellow parents brainstorm ideas for plant-based meals. All the while, she continued to perfect her own version of ranch dressing for her family at home, and eventually began experimenting with a commercial version of the product.

"I would try and fail, because it's not an easy process to figure out," Simmons says. "It's very scientific, and I had to do a lot of research to understand how that process works. Then, one day, it worked. I was like, 'Holy crap! I just did it.'"

Simmons believes that the secret to Floydy Pants ranch being so good has to do with the tang factor, the creaminess and that it doesn't separate — elements that took her over 200 batches to figure out. Once she was satisfied with her recipe, she began bringing jars of it to people — even non-vegan friends — who were blown away by the product and encouraged her to sell it. She found a commercial kitchen, went through all the licensing processes and officially launched Floydy Pants in August of 2020.

Simmons has been heartened by the response she's received to her ranch and has plans to add more dressings to the line, including a caesar and a spicy ranch called "Floydy Hot Pants." She's even picked up a few wholesale accounts in Kansas City, New York and around St. Louis. However, her ultimate dream is to have Floydy Pants serve as the economic engine behind Good Luck Farm, an animal rescue and education center she plans on opening one day.

"Our hope is to eventually have a vegan food company that will be able to support this type of outreach and advocacy for animals," Simmons says. "That would be our end game. Animals are the same as us; they want to live their lives and be with their families. I'm not a judgy vegan. I just want to live in a world where people don't have to choose between flavor and less cruel options."