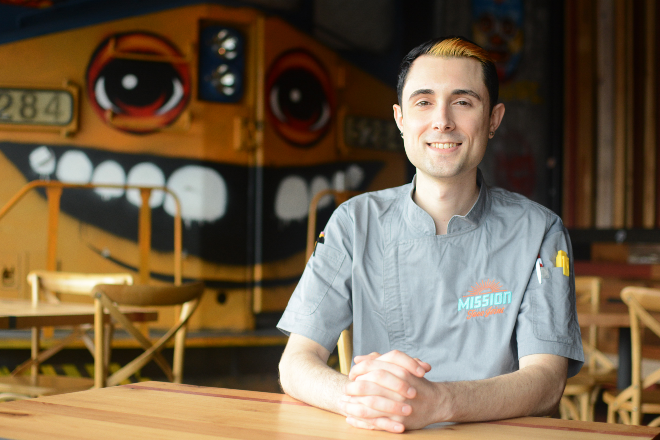 Joe McMahon can't remember a time when he wasn't planning on becoming a chef. Even as a little kid, poking around in his grandmother's kitchen, he wanted to be part of the action.

"My mom's side is Italian, so cooking has always been a part of our daily routine," McMahon says. "Since I was old enough to see over the countertop, I've been in the kitchen cooking with my grandma. That's where I got interested, then all through grade school and high school, I knew I wanted to be a cook."

McMahon's line from cooking at his grandma's house to managing the kitchen at Mission Taco Joint's (105 East Jefferson Avenue, Kirkwood; 314-666-5757) Kirkwood flagship is fairly straight, thanks to his unwavering desire to become a professional cook. As soon as he was old enough to work he got a job washing dishes, then worked his way up in the kitchen until he graduated and was able to enroll in culinary school.

McMahon's culinary school experience confirmed that he was on the right path, as did working at the Great Lakes Naval Station. He worked at the massive operation throughout school and for a few years after, eventually leaving to work for P.F. Chang's. Attracted to the Asian-inflected chain because of its growth opportunities, McMahon soaked up all that he could about the business and operations side of the kitchen.

He was so successful in his role that he was promoted and moved from his native northern Illinois to the St. Charles location of P.F. Chang's. It was a demanding gig, so when he wanted to decompress after work, McMahon headed across the street to Mission Taco Joint. He quickly became a regular, and was struck by how happy everyone seemed to be working there. It inspired him to make a change in his own professional life.

"I loved the food, drinks and atmosphere, and became friends with the staff," McMahon recalls. "Everyone seemed happy to be there, and no one had anything negative to say. When I got the opportunity to interview with [chef and co-owner] Jason Tilford, he walked me through how they do things and what they do for their employees. I was wowed, because you don't really see that in the restaurant business anymore. They are very passionate about making sure that their employees are well-treated."

McMahon was hired on as the kitchen manager for the restaurant group's Kirkwood location. Because the restaurant had not yet opened, he was able to train in all of the Mission Taco Joint kitchens, an experience he credits with giving him a rounded-out view of the restaurant's vision. It also placed him in the challenging position of being tasked with opening a restaurant in the midst of a pandemic, which, though it's has had its share of challenges, has been overall rewarding thanks to the support of his employers, co-workers and guests.

"Opening the store helped us get a sense of normalcy — there's still a crisis going on, but we are going to get this team together, open and do a great job," McMahon says. "We've had to react and learn quickly; some things have worked and some haven't. But we're always going to be prepared and do the right thing for our employees and guests."

McMahon took a break from the kitchen to share his thoughts on the St. Louis restaurant community, the changes he thinks will be in store for the hospitality industry going forward, and what gives him hope during this challenging time.

What is one thing people don’t know about you that you wish they did?
I like hugs, but I'm too shy to initiate them.

If you could have any superpower, what would it be?
The ability to teleport long distances. That way I could visit people and places whenever I want.

Which ingredient is most representative of your personality?
Tomatoes. They get along with everything, and they can be on the sweet side or sour side.

What is one thing you make sure you do every day to maintain a sense of normalcy?
Cook dinner. Even after working at the restaurant, I'll still cook dinner when I get home most days.

What have you been stress-eating/drinking lately?
Soda. Particularly, Mountain Dew. The more caffeine and sugar the better. I’m not big on coffee, so soda’s my vice.

You have to be quarantined with three people. Who would you pick?
My partner Dony, and my coworkers Amber and Erin. I’m pretty much already quarantined with them! We see each other every day and have a lot of fun, so I know we’d get along together in quarantine.

What would be your last meal on earth?
Probably my grandmother's family recipe soup. It’s a cross between chicken noodle and Italian Wedding soup. It’s a chicken stock-based soup, but the noodles are acini di pepe noodle, which is a small almost seed-sized pasta. It’s finished with tomato sauce. When she makes it, I'll eat it for every meal until it's gone.

What do you think the biggest change to the hospitality industry will be once people are allowed to return to normal activity levels?
I think the biggest difference will be the level of appreciation the public has for those who work in hospitality. After being limited or restricted by what they can do, where, and for how long, I think that many people will come out of this with a greater appreciation for the services that are sometimes taken for granted.

What is one thing that gives you hope during this crisis?
The support of my family, friends and coworkers, first and foremost, but for the industry as a whole, it’s been amazing to see the camaraderie of our community, both inside and outside of the restaurant. For our Mission Taco Joint team, everyone is willing to jump in and support one another. I’ve seen people step outside their comfortability to be there for a coworker in need. There has also been an overwhelming response of customers. People go to restaurants to be served, and even when that is taken away, people still come out to support us. It shows me that people want us here, and that’s a great feeling.