Mohammed Qadadeh of American Falafel Made a Delicious Career Change 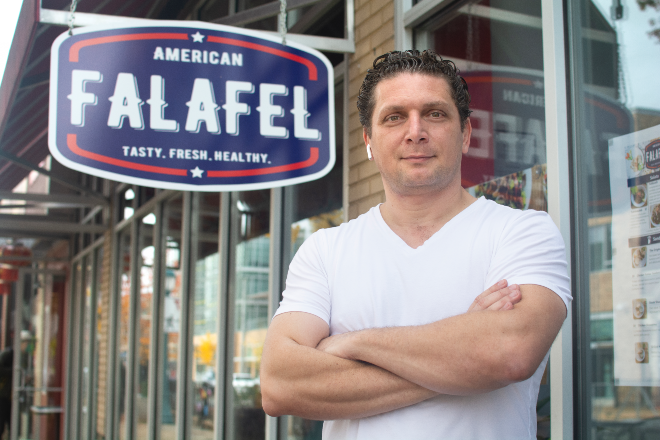 Before opening American Falafel (6314 Delmar Boulevard, University City; 314-553-9353) in June of this year, Mohammed Qadadeh enjoyed great success in IT, sales and management with Mastercard. A computer scientist by training, Qadadeh spent fifteen years with the company, working in both its St. Louis area offices and Dubai, where he was Mastercard's general manager for three countries in the region. When he tells people his background, he admits they think he's crazy for leaving it all behind to open a restaurant.

"They can say, 'He had it all — a big executive career, he could travel, he could afford the good life,'" Qadadeh says. "To give that all up and start a restaurant is a bit nuts, but I think that job prepared me for this. I really wanted to have my own field to plow or my own art to make. It could have been anything, but it formulated into a restaurant, and it's just right."

Qadadeh moved to St. Louis from Amman, Jordan, when he was seventeen to attend college at Webster University. Immediately upon graduating, he was hired on by Mastercard and moved up in the company. About a decade ago, he was offered the opportunity to work abroad in the Dubai office, a job that had him regularly traveling between Jordan and the United States and gave him perspective on the difference between the food that was available in the Middle East and St. Louis. It sparked something in him.

"I feel really connected with food in the Middle East and really couldn't find anything that was like how I enjoyed it there," Qadadeh says. "In St. Louis, there is a really diverse food scene, but nothing is true to the taste that I like."

Though Qadadeh dreamed of bringing the authentic Jordanian taste that he loves to St. Louis, he knew he couldn't do it on his own. About two years ago, he heard that a chef friend was moving to the U.S. from Jordan, and he reached out to him, asking if he wanted to move to St. Louis to help him bring his restaurant dreams to life. His friend agreed, and together they sketched out a plan for what would become American Falafel.

"We started playing around with recipes — my grandmother's and his grandmother's," Qadadeh says. "He told me that his mom did things one way, but that in a restaurant, we should do them another. I told him, 'No, we're going to do it your mom's way, because it's better.'"

In addition to the old family recipes, Qadadeh imported a falafel and a hummus machine from Jordan — equipment he emphasizes is the key reason why his food tastes exactly the way it would if it was eaten on the streets of Amman. He also tested 25 different Jordanian breads before settling on a bakery in Chicago; the bread is baked fresh every day and delivered to his restaurant within five hours of coming out of the oven.

However, Qadadeh believes that there is more to what makes American Falafel so special than the food, no matter how good it is. As Qadadeh explains, he did not simply set out to open a restaurant; he wanted to create a community gathering place and become an important part of the fabric of his neighborhood and his guests' daily lives. Though he says it hasn't been easy to do during a pandemic, the smiles on his guests' faces and the relationships he's built have made it all worth the risk.

"I'll admit it wasn't an easy decision to make, but you have to make a decision, take that leap and go for it," Qadadeh says. "And going for it means doing so wholeheartedly — not halfway there and then you cut out. If you commit and put in the work, hopefully it will work out."

Qadadeh took a break from the kitchen, where he's prepping for his first philanthropic collaboration with Welcome Neighbor STL, to share his thoughts on what it's like to be in the restaurant business at this moment in time, and what gives him hope, even among challenges.

As a hospitality professional, what do people need to know about what you are going through?
We want everyone to know that we are so appreciative and grateful for the kindness and support that they have shown us. American Falafel opened in June in the midst of the pandemic, and without the community support we would not be here. It is through their support for partnerships like the one we are doing with Welcome Neighbor St. Louis that we can showcase St. Louis on a national stage.

What do you miss most about the way things were at your job before COVID-19?
The most fulfilling thing is the interaction with our customers and when you can bring a smile to someone by serving them amazing food or by giving a small gesture of appreciation.

What do you miss least?
Nothing.

What is one thing you make sure you do every day to maintain a sense of normalcy?
In a sense, we are starting to move forward, and we will get through the second wave. I hope we will be back to somewhat normal life by next spring/summer.

What have you been stress-eating/drinking lately?
HAHAHA, I have put on some weight. I must say, however, that I have been working out seven days a week to burn it off. OK, next question!

What are the three things you’ve made sure you don’t want to run out of, other than toilet paper?
Good friends and some wine for sure.

You have to be quarantined with three people. Who would you pick?
My three kids. They might not want to, but I do.

Once you feel comfortable going back out and about, what’s the first thing you’ll do?
Travel for sure, maybe skiing, maybe beach.

What do you think the biggest change to the hospitality industry will be once people are allowed to return to normal activity levels?
No one can really tell how the industry will look post pandemic. I can tell you one thing: You will always have amazing food and amazing experiences in St. Louis in the future.

What is one thing that gives you hope during this crisis?
I am always hopeful and optimistic. I am also always encouraged when I see a partnership like the one we are doing with Welcome Neighbor St. Louis and how it can bring the community together to support each other during these trying times.