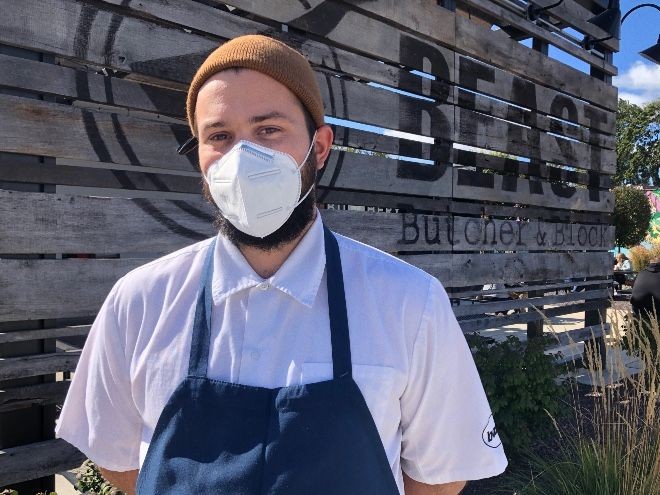 In early March, Ryan McDonald knew things were going to get bad. So did the rest of the management team at BEAST Butcher & Block (4156 Manchester Avenue, 314-944-6003), where he is executive chef. The group thought they were being proactive, setting plans into motion for how they would handle operating in the midst of a viral outbreak. The next thing they knew, they were shutting down for six weeks.

"For me, I started keeping an eye on things in early March and thought the shit was going to hit the fan," McDonald says. "We all started discussing things and were just beginning to prepare ourselves in case things hit pretty hard. We had all eyes on it, but by the time we could act, it still took us all by storm."

This is not what McDonald expected when he decided to jump back into the restaurant business and work with David and Meggan Sandusky for their BEAST Craft BBQ restaurant group about a year and a half ago. Back then, he was coming off the closure of Good Fortune, the restaurant where he worked as executive chef, and had taken about six or seven months off, doing construction and trying to figure out his next move. He wasn't sure he wanted to get back into the industry, but David reached out to him and offered him an opportunity he couldn't pass up.

"Barbecue is something I've never done before, even if I've worked with meat a lot in the past," McDonald says. "What sealed the deal is that we have a butcher shop and I love doing charcuterie, sausages and prepared foods. The Skullery was a huge draw, as was learning about what it's like to work in a high-volume place and picking up barbecue techniques. But really, the one thing that was super important to me was quality of life and being able to work but still be with my family. David and Meggan really put that first."

By March, McDonald was really hitting his stride with BEAST, helping to turn the Grove location's brunch into a must-visit experience, leading tasting events in the Skullery and offering his expertise on the restaurant group's other concepts, including the forthcoming BEAST Southern Kitchen & BBQ — all of which led to his recent promotion as culinary director for the entire brand. However, in the face of the pandemic, he's seen his role shift focus to helping the restaurants figure out what to do in the midst of so much upheaval.

"For us, the first thing is the safety of our staff and guests," McDonald says. "With so many unknowns, we made the call to shut down and see what happened because there were so many unknowns. It certainly wasn't an easy decision, but we felt it was the right decision rather than to continue operating like everything was OK. But then we started having guests message us that they really wanted our food. We felt like it was a disservice not to let them eat our food when they were asking for it, so it felt right to reopen again."

McDonald describes feeling as if the current way of doing business is a new normal that he and his team have gotten used to living. Though it's an extra layer added to the daily restaurant routine, he's been able to find little moments of joy in the midst of it all, like meeting Butchery customers in person after developing a relationship with them over the phone for the past few months. It's interactions like these that are getting him through for what he believes is the long haul.

"I don't see things going back to what we thought was normal before for a long time," McDonald says. "We've been going through this long enough that we've developed these new habits. I think it's going to be a very long time before the days of sit-down and fine dining come back. I think a lot of the restaurants that have pivoted and shut down concepts for ones that are more palatable for where people are at right now are going to continue with what they are doing. You have to meet people where they are right now and do whatever you have to do."

McDonald took a break from the kitchen to share his thoughts on what it's like to be a hospitality professional in such a chaotic time for the industry, how he maintains a sense of normalcy and what gives him hope in the midst of the struggle.

As a hospitality professional, what do people need to know about what you are going through?
These are some crazy unprecedented times for all of us in the hospitality industry, but I honestly feel very lucky to work for a company that is willing to go for it and push for more. With a new restaurant opening, expanding wholesale in the butchery, brunch and ghost concepts, we’ve been keeping pretty busy. I’d like to reiterate to the public that it is very important to give your continued support to all of the local restaurants that you would like to be able to get back into once this is all over. We’ve been there for you, and now we need your help.

What do you miss most about the way things were at your job before COVID-19?
I really miss seeing our guests in the space — being able to watch people enjoying their food and company, talking to them about their experience, and getting to hear the sounds of a full restaurant. All are things I seemed to have taken for granted before the pandemic. I also really miss the chance to do our live fire tasting menus and collaborative dinners in the Skullery.

What do you miss least?
I miss it all.

What is one thing you make sure you do every day to maintain a sense of normalcy?
I've tried to keep a lot of the same routines at home and work. Maybe it's taking extra time each day to communicate with my family and staff alike, to make sure they're all feeling safe and loved and supported during these times. If the people around me feel good, it makes me feel good.

What have you been stress-eating/drinking lately?
When quarantine began, I got super into making classic cocktails for the first time. Negronis, Boulevardiers and tiki drinks have stolen my heart.

What are the three things you’ve made sure you don’t want to run out of, other than toilet paper?
Good local pork, bourbon and firewood have definitely been staples of our house.

You have to be quarantined with three people. Who would you pick?
My family. We have really just become a lot closer than ever during this whole mess, and I wouldn't choose anybody else.

Once you feel comfortable going back out and about, what’s the first thing you’ll do?
Travel. My wife has family in Washington, so we would love to see them. Also, the ocean is calling my name ... maybe Costa Rica?

What do you think the biggest change to the hospitality industry will be once people are allowed to return to normal activity levels?
I really don't know what the new “normal” will be or when it will happen, but I believe that we will start to see a lot more small spaces doing a lot more takeout, delivery or prepared meals. Even when the threat of the virus is under control, it may take people a while to readjust.

What is one thing that gives you hope during this crisis?
One thing I have learned over the years in restaurants is that everything works itself out. You can have a horrible service, but you get the chance to start anew the next day. You can lose a great team member, but you will find another awesome person to fill the role. You can close a restaurant, but then new opportunities await you. I feel the same about our current situation. We are fortunate to have such an awesome, tight-knit industry in St. Louis, where people truly care for each other and are willing to fight together and help each other however we can. This may suck, but we will pull through.