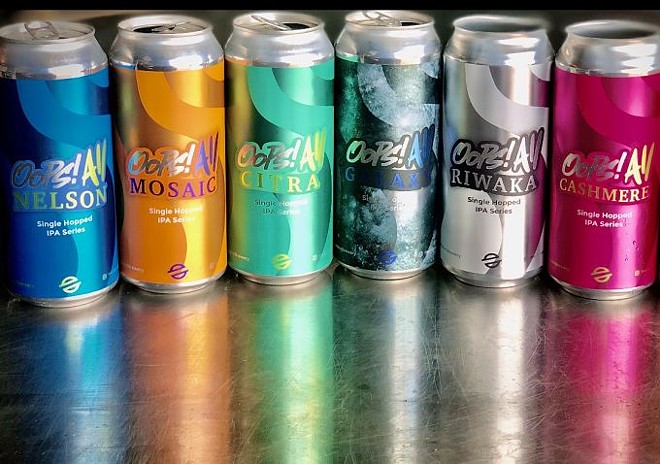 As COVID-19 closures began to claim the open hours of craft breweries in early spring, each individual shop had a particular set of circumstances to overcome.

At Modern Brewery (5231 Manchester Avenue), a few factors immediately proved themselves to be challenges. For one, customers wouldn’t be enjoying beers at the facility’s tap house anymore; that closure to the public remains in effect today. And in addition to on-site sales, the brewery has always built its model around self-distributing to pubs and restaurants, with an emphasis on city and mid-county locations — but now those businesses are closed or drastically cut back themselves.

And perhaps the quirkiest knot to untie was the fact that Modern Brewery has become synonymous with one product more than any other: Citrapolis IPA, which makes up nearly two-thirds of its sales. If you see a tap handle of Modern’s at your local pub, it’s likely tied to a keg of Citrapolis — expanding upon the success of the brewery's flagship was key to surviving this moment.

As it turns out, IPAs are still at the center of Modern’s new model, with a series called “Oops! All” serving as a lab, of sorts, as single-hopped IPAs are brewed, canned and sold curbside at the brewpub, or via a small, select group of retail accounts.

“It’s a showcase for hop qualities and characteristics,” says Modern’s owner/operator Beamer Eisele. “What's been really positive during this whole pandemic is that we’ve had to find ways to get creative.”

Head brewer Brian Harmon notes that there’s a consistency to the line. Each comes in at the same IBU (50) and ABV (7%), and all the cans have been given a graphic cohesion by designer Nick Mantia. With smaller batch sizes, Harmon says, “We’ll be able to try out different hopping techniques, boil times, use of whirlpooling.” All of these are “changes that we can use going forward,” he notes, whether as single-hopped beers or those made up of hop combinations.

To date, Modern’s released its “Oops! All” series with Nelson, Mosaic, Citra and Galaxy hops. The brewery will roll out two more versions, featuring Riwaka (New Zealand) and Cashmere (USA) hops, going live next week. With luck, one more version, with El Dorado hops, will appear before long.

Modern’s staffers say the Galaxy round was arguably the most successful in terms of sales and feedback, giving it a leg up on returning.

“It’s been really fun,” Harmon says. “This series has definitely been the right way to do it. It’s been a good learning experience, to see the characteristics of a hop all by itself. They all react a little differently and the only thing that changes is the hop, so you can really tell what one hop brings to the table.”

IPAs, both Harmon and Eisele note, have gone through multiple trendlines in recent years, as craft breweries have swung between creating the most bitter brews possible to lighter-weight session IPAs to ultra-cloudy hazy IPAs. Modern’s approach with the single-hopped series of "Oops! All" is meant to allow for each hop to lead the way, but with those consistent IBU/ABV guidelines in place. Eisele says that, to date, the series is “starting to find legs,” especially with on-site customers, as only a few cases of each are going out into the wider retail market.

About a year back, there were times when the only beer being canned at Modern was the flagship, Citrapolis IPA. These days, Modern’s had up to eight or nine cans on display during their weekend curbside sales. Harmon says that special releases have been hits, like “the smoothie beers we were releasing this summer. We’ve done well with our Imperial IPA, called Mansions & Benzes, and our big stouts. We tend to see new faces when we have those, but we still see a lot of regulars who come in for a case of Citrapolis every other weekend, because they know it’ll be here.”

That, he says, is the silver lining to all this. "The can sales have been going very well for us,” he notes.

Modern Brewery’s beers are available for purchase at their midtown facility via curbside pickup, with hours currently set from 1 to 5 p.m., Thursday through Saturday. Mantia has also created a website for several local food and beverage entities called supportlocalstl.com, and Modern’s got an online ordering page there.

You can also find its beers at several neighborhood-based locations like Vincent’s Market and Gustine Market, as well as at specialty shops like Craft Beer Cellar and St. Louis Hop Shop.