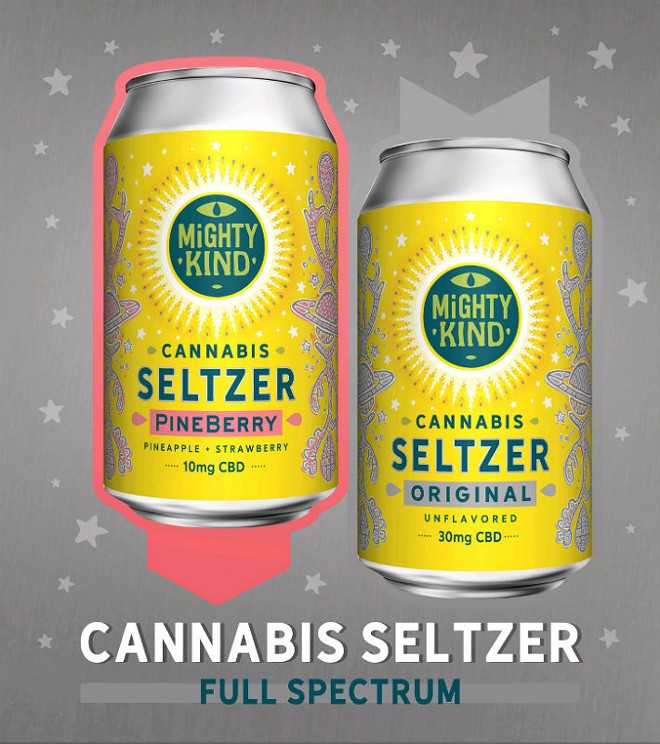 Josh Grigaitis may have figured out a few things in his life by now, but how to combine that elusive live/work idyll? That he’s got down. With a house on the serrated, northern edge of The Hill, he lives next door to his family’s longtime tavern, Pop’s Blue Moon. On the other side of the Moon is a building that once housed a neighborhood grocery and, later, office space. For years, he waited on that sorta-nondescript building to become available, and now it’s the home of ​Mighty Kind​, a beverage brand that Grigaitis and a small crew of collaborators are hoping to see grow by leaps and bounds in the next year.

For starters, Mighty Kind teamed up with WellBeing Brewing, a concern that put St. Louis squarely on the map of non-alcoholic brewing cities; their releases can be found on store shelves all over town today. After some releases as a co-branded affair, Mighty Kind is now out in the market with its first solo effort, a 12 ounce, 10 milligram of CBD PineBerry Cannabis Seltzer, a fusion of pineapple, strawberry, organically grown hemp, carbonated water and some moxie.

Grigaitis credits Jaclynn Rowell for “making taste the number one thing” in all of their projected beverages. After meeting next door at the Moon, a hub of the “mindful drinking” community, the pair began to test out recipes on some very simple equipment, both at the Moon and in their new laboratory/office.

“I’ve always been a foodie,” Rowell says, “the type of kid who’d mix all the Kool-Aid’s together.”

The stakes are higher today. But the pair is still engaged in some very elemental ideas of combining fun flavors that can be had on their own or as part of mocktails and distinctive enough to stand out in what’s becoming a competitive field. The fun part was making prototypes with “a soda stream and flavor extracts” at the lab, says Grigaitis, but the business component of all this was never out of mind.

Putting together the right elements took some time. Currently, their production facility is at 4204 Main Street Brewing in Belleville, a spot that could accommodate Mighty Kind’s hoped-for growth numbers. They’ve secured Missouri distribution through Craft Republic and are getting closer to distribution in Illinois, as well. They’re also in Oklahoma, a state in which they can self-distribute and also carry THC-branded/THC-infused product. That's not yet a possibility in Missouri, though he feels that they’ll be able to ramp up that production here, too, once, presumably, THC drinks become legal.

“We expect to add states in this year, still,” says Grigaitis, adding that in Missouri "we’re in a lot of the small grocery stores and are waiting to get into the bigger chains who haven’t yet crossed the line into stocking CBD drinks.”

By the time they do, more time will have passed for competitors to have entered the market. At the moment, Grigaitis says, Mighty Kind is not at the very beginning of the race, nor are they at the end, obviously. But “the bigger brands are starting to get into the game” and establishing some brand loyalty is key. In addition to PineBerry, an Original can at 30 milligrams is available, with a 20 milligram Heady Lemon next in line.

Not lost on him is the fact that one of the prime local bars to switch to at least a partial N/A lineup of products, the Blue Moon, is operating at only partial, outdoor capacity these days. So launching the product at this moment means getting into stores and onto the radar of consumers as opposed to having sympathetic bar staffers help make the sale. He’s figuring that his company’s retail approach in the “ready to drink” CBD beverage market will work. Though he can’t help but daydream of better days when he passes the few dozen feet from his home, past his fam’s bar, to his office.

COVID-19, he says, “really wiped out the on-premise part of this, which is another big part of my livelihood. I’m a big fan of social gatherings, and it’s a passion of mine to get these into people’s hands in a social setting.”

Once in said hands, it’s up to the flavor and the resultant sensations to make further sales. And having tried a Heady Lemon, with its 20 milligram CBD content, we can safely say that it: a) tastes good; and b) leaves you feeling... mighty fine. Good job, Mighty Kind.