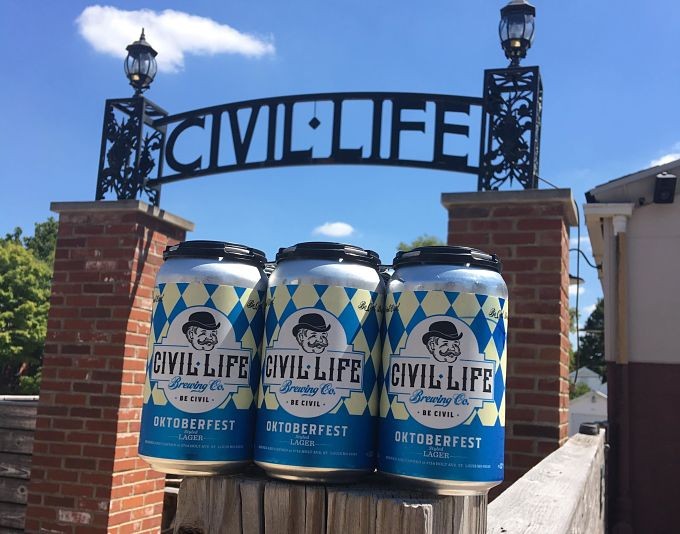 If you’ve visited a St. Louis grocery store of any size this week, you’ve likely passed by one of the surest indicators that fall isn’t too terribly far away: the appearance of Oktoberfest beers, a rite of pre-passage into the season. These beers arrive at retailers every August now, as breweries great and small put their own versions of the popular, seasonal title into a crowded marketplace.

On Wednesday, one go-to local brewery, Civil Life, ran the first of its Oktoberfest beer through the canning line, with six-packs set to hit store shelves over the coming week. On-site sales of the twelve-ounce, 5.1% ABV product start today, with curbside pickup at the south city brewhouse.

Now, on most Fridays, we’ll try to tip you to the newest products available around town, and though Civil Life didn’t have an Oktoberfest in their first year of operation (they opened in a September and didn’t have the needed lager yeast in-house), their version of Oktoberfest has been a pretty steady presence on their calendar since. So today’s tipsheet is instead sketching out a local stalwart’s linchpin seasonal, as well as how that business model has shifted emphasis during COVID-19 times.

Dylan Mosley, Civil Life’s co-founding head brewer, says that there wasn’t a “full map or a battle plan” when the brewery opened, envisioning what beers would move into seasonal roles. But he always figured that a “straight-forward brewery” like Civil Life would eventually add an Oktoberfest. And so it goes that August is now the time that Civil Life’s Oktoberfest, a lager that incorporates the increasingly-popular saphir hop, is slated for annual release.

That’s true for Civil Life and pretty much everyone that produces one.

“Part of that has to do with the market,” he says. “Distributors are banging on the door for one and you don’t want to get caught” without, at which point “they say there’s already enough Oktoberfest available out there.

"Making lagers is generally something that I like to see. And breweries that avoid the issues of working with lager yeast would have a hard time maintaining a broad enough rainbow of beer styles” to keep their customers happy, he adds. “And in our country, it’s a style of beer that people really have an affinity towards.”

He figures that in the U.S., Oktoberfest beers have taken part in a cultural trend that’s not different “from peeps coming out a month before Easter or fireworks starting in June. It’s all the same kind of holiday creep.”

In Germany, he says, the beer’s given a much more considered approach, in some respects, as official recipes are tweaked annually, with German brewers adapting to that year’s mandated twists. German beers that ship to America, he believes, reflect a more conservative approach, though, with the same style likely to hit U.S. stores on an annual basis.

In the U.S., meanwhile, breweries adapt and switch styles in a different way, playing with elements and eventually creating a “beer style that’s become more accessible," as Mosley puts it. "You’re kind of seeing all styles of beer drift towards that accessibility now.”

Partially, that may be a result of the broader world’s buying habits during this pandemic-mandated lull in drinking outside of the house. Like many breweries, Civil Life shut down its on-site pub hours when the coronavirus hit; unlike other local/regional faves, though, the pub aspect is still fully shut down at the southside location, with about 90 to 95% of the brewery’s products now canned and the small remainder going out as kegs.

Gone altogether is the brewpub purchasing, which would have allowed patrons to sample a handful of half-pours in a session. Still in effect is its on-site sales of canned beverages. Finding the right balance between giving people the usual fare and working in some other house favorites has been the daily challenge.

As the brewery restarted brewhouse operations, the first order of business, Mosley says, was to catch up to demand for their flagship beer, American Brown. That was augmented by two, sometimes three, other beers going into production, sold either directly from their own loading dock or through Missouri and Illinois distributors. Over the past month or two, the brewery has ramped up the available offerings, though, in order to keep longtime buyers coming back.

“It’s not that we don’t have draft available,” Mosley says, “but we have a radically different ratio between cans and drafts available.”

At this point, the brewery’s offering seven varieties, which, Mosley says, is a number that hopefully compels a Civil Life fan to decide a trip is necessary.

"You want people to get here and have a selection," he says. "At first, it was more about catching up. Now we’re getting restocked.”

An Oktoberfest is now checked in on that growing list. It’s coming to a market near you this week, at just the right time.

Thomas Crone is a longtime Riverfront Times contributor. He will report on a weekly basis about new releases from local distilleries and craft breweries.