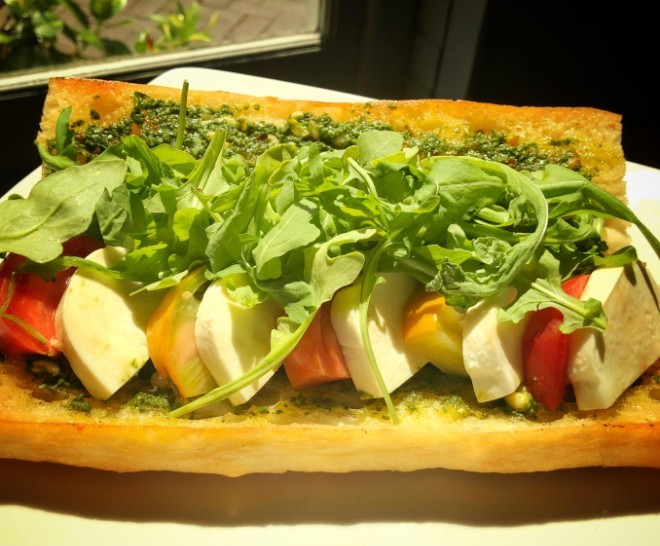 Brian Schmitz, Jonathan Frederick and company knew they needed to do something to help their businesses, Polite Society and the Bellwether, weather the COVID-19 storm. It turns out, the answer was right before their eyes, and between two pieces of bread.

"The general idea actually came to us a long time ago when some of our employees would have fun at the end of the night ordering food from the kitchen," Schmitz explains. "The kitchen would be breaking down, and people would ring in the craziest sandwich orders, intentionally being ridiculous at the chefs' expenses. Then the chefs would send out these even more outrageous orders to them. It was just fun, but it gave us an appreciation for the ridiculous nature of what sandwiches could be."

Now, Schmitz and his team have taken that inside joke and turned it into a serious sandwich concept, Sub Division. The gourmet sandwich delivery service launched earlier this week out of Polite Society's kitchen as a way to keep as many of their employees on payroll during the pandemic while finding a creative way to serve their customers, many of whom are uncomfortable dining out in public as the pandemic rages on.

As Schmitz explains, Sub Division is an idea he and his colleagues had considered for a while, and even was a contender for what they would open inside the forthcoming City Foundry (they ultimately settled on the breakfast-inspired concept Good Day).

However, as they brainstormed ideas for how to best operate during COVID-19, they kept coming back to the sandwich concept. At first, it was a casual mention at their weekly management meetings, but as the weeks went on, the team found themselves spending more and more time discussing the idea. About five weeks ago, they decided to go all-in.

"Like most folks in the industry, 2020 brought this closer to the forefront of our minds," Schmitz says. "When we were struggling to figure out the right way to reopen our dining rooms, we were worrying about the fact that some of our staff was concerned about coming back while others felt that they needed to. Some of our guests wanted to be supportive, but there is a limit to how many times a week they could order curbside. We figured this was a way we can take care of our people, our guests and our neighbors."

Schmitz describes Sub Division as a "ghost kitchen," meaning it is a separate concept operating out of its already existing kitchen at Polite Society. The inspiration is gourmet sandwiches, all named for movie quotes, like the "I Believe You Have My Stapler," a vegetarian sandwich made with tomatoes and fresh mozzarella, the "Go Ahead, Make My Day," a braised pot roast behemoth, and the "Karate in the Garage," which features hot ham, pickles and pimento cheese between two slices of griddled brioche. Schmitz also recommends the meatball sandwich, which he says is chef Dan Sammons' specialty.

"Dan makes the best meatballs I've ever had in my life," Schmitz says. "When I first ate them, I was floored. We're going to change up the menu regularly, but I don't see this one going anywhere."

For now, Sub Division is delivering to a limited area, bounded by Washington Avenue to the north, Kingshighway Boulevard to the west and Gravois to the south and east. Though he doesn't rule out expanding their delivery service, Schmitz wants to make sure the team works out all of the kinks before taking on any additional territory — especially because he and a few of his other team members are personally hand-delivering every order. He admits it's a crazy ride, but he also finds it energizing in a time when the industry needs a does of good vibes.

"Being out there and delivering to people — it reminds you of why you got in the business in the first place," Schmitz says. "It makes you realize that there are still ways to take care of people. That gives me hope."