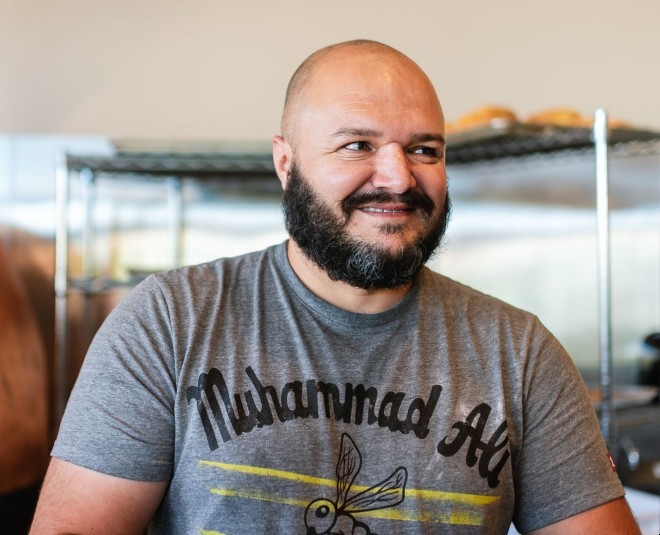 Edo Nalic doesn't hesitate when asked about what he misses most about the way things were at Balkan Treat Box (8103 Big Bend Boulevard, Webster Groves; 314-733-5700) before the COVID-19 pandemic turned life on its head.

"I miss the lines," Nalic says. "Every day it was busy. I'd see a line of tickets, and it was just fun. It was stressful, but it kept us on our A-game. I'd take that kind of stress any day rather than the stress of worrying whether or not anybody is going to come in."

For Nalic and his wife and business partner Loryn lines were an everyday part of their lives since opening the brick and mortar storefront for Balkan Treat Box in February of 2019. But even before that, the pair had amassed an army of regulars for their food truck of the same name, which first hit the streets in late 2016. Inspired by the food of Nalic's Bosnian homeland, Balkan Treat Box has garnered local and national acclaim and earned numerous accolades, including a Best Chef: Midwest James Beard nomination earlier this year for Loryn.

Perhaps more importantly to Nalic than all the awards, however, is the way he and Loryn have shined a spotlight on Bosnian cuisine as an integral part of St. Louis' culinary heritage. For Nalic, Balkan Treat Box is a way for him to share his home country with his new one, bringing to life the experiences he had as a kid growing up in pre-war Sarajevo.

"In Bosnia, I remember how we always ate meals at home together as a family," Nalic recalls. "There was nothing quick-fix; everything took time to prepare and was made with care and passion and love. Then the war began, and we ended up as refugees in Germany. We still ate our food at home, but we couldn't go out to restaurants and eat it, and I didn't realize how much I missed it. It took us five years to return to Bosnia, and when we did, I remember thinking, 'This is what I'm going to eat; this is what I am craving.' Food kept bringing back all those memories."

Though Nalic never let go of those memories after moving to the United States, he never really thought of opening a Bosnian restaurant until he met Loryn. At the time, he was managing Taft Street Restaurant & Bar, and she was one of his food sales representatives. They fell in love, and Nalic introduced Loryn to Bosnian cuisine by taking her to restaurants in and around the Bevo Mill neighborhood. Loryn was hooked, and before they knew it, they were married and talking about opening a Bosnian-inspired restaurant.

"Loryn had always talked about opening her own place, and I knew it was going to take someone like her to popularize Bosnian food to the masses," Nalic explains. "She's dedicated, passionate and respected, and knew we didn't want to Americanize it. I've seen that backfire so many times when people totally underestimate the curiosity and welcoming nature of American people to try new things."

Four years later, the Nalics were riding high, running one of the most successful restaurants in town, until the pandemic hit the area this March. In just a matter of weeks, the restaurant was forced to completely change its business model to takeout only, something that Nalic admits was a difficult learning curve. He describes the experience as one of sleepless nights as he and Loryn would lay awake, working out the kinks as they figured out how to transition to a new way of doing business.

As hard as it's been, Nalic can't help but feel grateful when he thinks of the support he and the Balkan Treat Box team has received from their customers. Though there have been a few dissatisfied guests, most people have approached them with kindness and grace — something that gives him hope even in the midst of such a challenging time.

"It's hard seeing a whole day crumble away into a bad service," Nalic says. "All you can do is hope that people will not nail you to the wall but be understanding. And really, they have. We have so many regulars, and they have all been cheering us on and have been so supportive. We really love them."

Nalic stepped away from the restaurant's wood-burning bread oven — he still bakes their signature pide fresh every day — to share his thoughts on maintaining a sense of normalcy, the importance of his daily coffee ritual and what it's like to live in uncertainty.

As a hospitality professional, what do people need to know about what you are going through?
The uncertainty. You dream about something for so long, and you go all-in. Then, it might all be squandered away, and it doesn’t have anything to do with ourselves and our food — it's other circumstances. That’s really scary. One year or two years from now this all might look different. It’s a scary thought. I don't like to think about it too much. The fear of going from a dream to "What am I going to do now?" is real.

What do you miss most about the way things were at your job before COVID-19?
The line and the casual talk with people. Seeing familiar faces, our wonderful staff of food runners — they were the best. It was amazing. It was like walking into a place, and we all got to a point that if it looked like it would be a busy day, we’d know we would have fun and good energy.

What do you miss least?
Absolutely nothing. I can’t think of one thing.

What is one thing you make sure you do every day to maintain a sense of normalcy?
Coffee. Back home, it’s meant to be a social thing, not something to crank you up to go about your day. Whether I am alone having coffee or with my brother or Loryn, it’s almost like a zen moment. I feel energized afterward, not because of the caffeine, but because it puts me in a state of calm. Coffee time does that for me.

What have you been stress-eating/drinking lately?
For me, I can eat pizza all the time, but also, there are three restaurants we go to when we feel stressed. We really look forward to Louie, Yolklore and Mai Lee. It's not just about supporting your friends. Those are my places.

What are some things you’ve made sure you don’t want to run out of, other than toilet paper?
Dog food and bananas. I eat a lot of them.

You have to be quarantined with three people. Who would you pick?
Loryn, Carmen, our general manager, and our CPA, Lloyd.

Once you feel comfortable going back out and about, what’s the first thing you’ll do?
Go back home to Bosnia. It was all taken for granted — family friends. I miss the nature, lakes, rivers, smells, everything.

What do you think the biggest change to the hospitality industry will be once people are allowed to return to normal activity levels?
I believe it all depends on leadership and communication. If people have a sense of trust and faith, and if information is relayed properly and not with different opinions, with one message and one purpose, we will get back to normal sooner than later. I think a huge part of where we are is because there is such conflicting messaging. If people trust science and follow guidelines, sooner than later we will be back to normal. If people are in conflict, we will be in big trouble. It all depends on what the message is going to be going forward.

What is one thing that gives you hope during this crisis?
When I see how people are supporting us — and that is the majority of people — there is a sense of sticking together and rising above together. I often see in comments people saying that they make sure to support us. You feel that somebody is thinking about you, and that gives me hope.