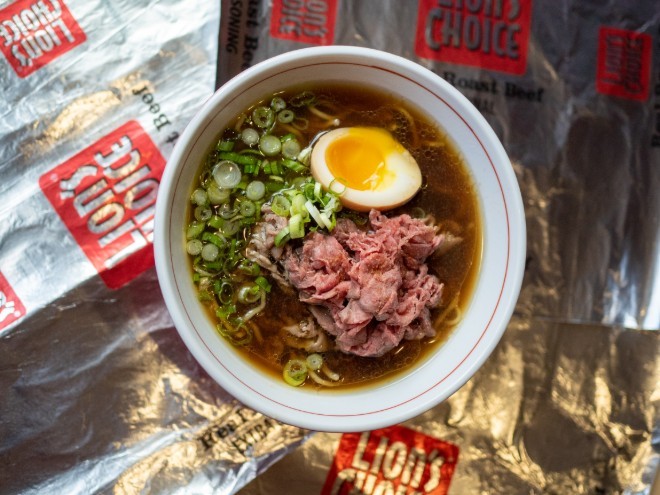 Two St. Louis culinary heavyweights have teamed up this week to bring us a steaming bowl of STL: The Lion's Choice-Nudo House King Beef Ramen.

The King Beef Ramen is a collaboration between Lion's Choice, the beloved hometown roast beef chain, and Nudo House, the already-an-institution ramen restaurant. As Chris Ladley, chef at Nudo's Delmar Loop location, explains, the idea for the dish began as a joke, but it quickly took on a life of its own.

"I started working on this as a wild-ass idea," Ladley says. "I often talk with my friends down at Flamingo Bowl and Pin-Up Bowl, and we are all obsessed with Lion's Choice and the big thing of au jus they have. We call it hot beef tea. We were all joking about it, and then I really started thinking about this idea. I talked to Qui [Tran] and he told me to run with it."

Though Nudo House debuted the King Beef Ramen today, the idea has actually been in the works for some time. After catering the Christmas Party for Flamingo Bowl last year, Ladley was inspired by the Chicago-style hot Italian beef sandwiches served at the event. In particular, he looked at the gravy that accompanied the sandwiches and thought that combining it with Nudo's beef broth would make for a rich, delicious base for a soup.

He decided to combine that idea with his love for Lion's Choice and played around with recipes for a while, finally settling on a simple recipe of ramen noodles, green onions, half of a ramen egg, rare roast beef and a sprinkling of Lion's Choice roast beef seasoning. As for the broth, Ladley is proud of the fact that he has used only locally sourced bones from humanely raised cows, courtesy of Bolyard's Meat & Provisions and Mac's Local Eats.

"We did a tasting with Qui and Lion's Choice in February, and it was dear fucking magic," Ladley laughs. "It's just one of those crazy ideas that actually worked."

The King Beef Ramen costs $12 and is available through Thursday at Nudo House's Delmar location.